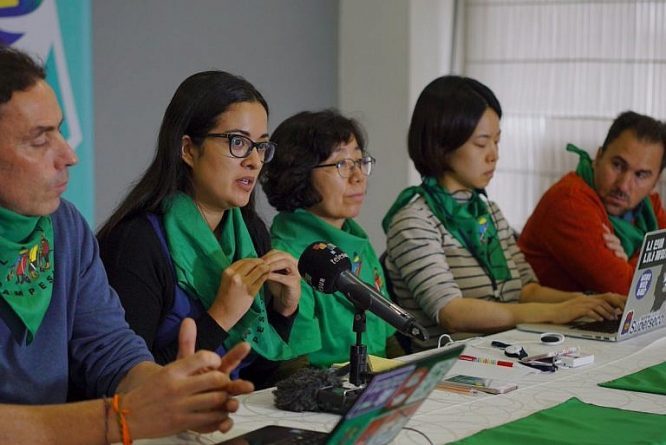 The international commission Via Campesina visited Colombia for the third time and left “disappointed” by the response of the government of Ivan Duque and the little progress in the implementation of the peace agreement. They point out that, while Duque affirms internationally that the agreement is doing great, in reality its effects are totally different. They rejected the violent action of the public force in Cauca, which caused the death of a comunero.

Next, the final statement:

We and us, members of the III International Mission of Observation and Monitoring of Via Campesina to the implementation of the Peace Accords in Colombia, 20 international delegates from 15 countries and allied platforms, we did five days of work and tours in the departments of Bogotá, Cauca, Tolima and Cundinamarca.

There we had multiple meetings with peasant organizations, indigenous peoples and black communities; also with State institutions, with ex-combatants of the FARC, representatives of the Congress of the Republic, embassies and international observers, among other actors. Always guided with the hope in the fulfillment of the Agreements for the Construction of a Stable and Lasting Peace and for the defense of Human Rights.

We also observe with great concern that the social protest – generated by decades of non-compliance by the State with hundreds of agreements signed with indigenous peoples, peasants and Afro-descendants, and currently accentuated by the breach of the Peace Accords – is repressed by the military and by the Mobile Anti-Riot Squadrons (ESMAD), thus violating the elementary rights to life, to social protest, to freedom of expression and to any international legal framework, as in the South West region of Colombia in the Social and Popular Minga .

As an International Mission we call on the Government of Colombia to reactivate the Dialogue table between the government and the ELN, as well as with the other insurgencies, to move towards a Stable and Lasting Peace that requires the recognition of the totality of actors in the armed conflict.

Faithful to our history of struggle and solidarity, and in line with what has been done in the three Missions in Colombia, Vía Campesina is committed to continue accompanying the Colombian people in the construction of peace with social justice and we make a global appeal to make the international solidarity and denounce in international organizations the systematic violation of Human Rights in Colombia. Our goal in this fight is the defense of life and merits each of our efforts together with the people of this beloved country.

The road is long and thorny, but we know that the only struggle that is lost is that which is abandoned.