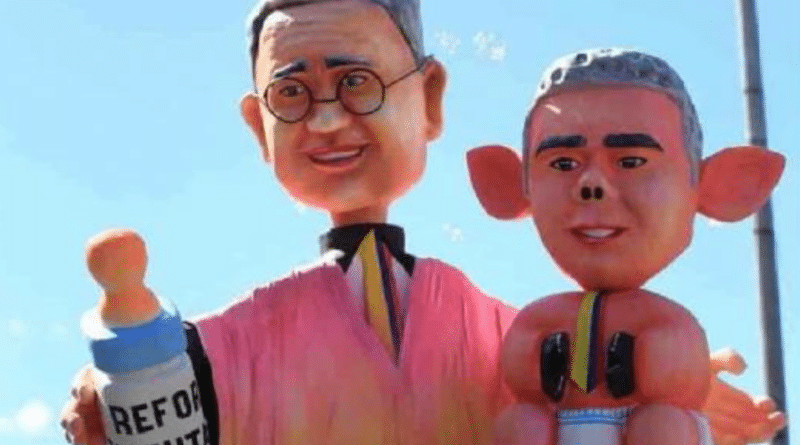 The opposition to the government of Colombian President Iván Duque began to collect signatures for a possible recall referendum.

The project, which has the support of parliamentarians, was presented by a steering committee before the National Registry of Civil Status and, if approved, will produce the format for the collection of signatures in six months. Approximately 1.8 million signatures are needed for its final approval.

It should be noted that recalling the president in Colombia will have to be established in the Constitution, an initiative that is led by the president of the Senate Peace Commission, Roy Barreras.

“We will initiate the process of this referendum with which we will make possible the presidential recall, universal basic income, zero enrollment for university students and the minimum vital pension for all Colombians” and added: “It’s signature by citizens will demonstrate their rejection of bad governments, of failed governments,” says Barreras, according to a note from Telesur.

The Polimétrica survey of the firm Cifras y Conceptos showed that the Colombian president is very unpopular among citizens, with a 63% rejection rate.

The initiative
After resigning from the U Party, Senator Roy Barreras announced the proposal for a recall referendum to the government of Iván Duque. The initiative materialized this Thursday with the official registration of the committee that will collect the signatures so that this proposal can be taken to the polls. The goal, according to committee members, is to collect at least two million signatures in less than six months so that Colombians can decide on this issue.

Although the referendum bears Iván Duque’s own name, the truth is that the proposal only seeks to allow the revocation of the mandate of any president. If the Colombian population endorses the referendum proposed by Barreras, an amendment would be created so that, after two years, the continuity of the president can be submitted to trial at the polls.

According to the proposal, the revocation could be requested due to the lack of government management, deterioration in the indicators of unemployment and extreme poverty, crisis of public order and citizen security, and lack of implementation in the peace agreement. If the amendment is approved, congress would have the possibility of requesting revocation after two years of the presidential mandate have elapsed. After verifying the viability of the petition, there would be a period of one month to call the polls to define the presidential future.

Although the referendum and the conditions set point directly against Iván Duque, the truth is that the action has little chance of affecting the current president. The timing isn’t right for the presidential recall to be approved and for it to be endorsed at the polls. This means that the amendment would only be established for the upcoming presidents, matching the conditions for mayors and governors, who can currently being recalled.

The recall referendum proposal is led by Roy Barreras, accompanied by the renowned journalist Patricia Lara and experts in conflict, student and youth leaders, leaders of Afro-Colombian communities and even students who are currently attending university. Together they will have to collect close to two million signatures in less than six months to bring the issue of recall to the polls.