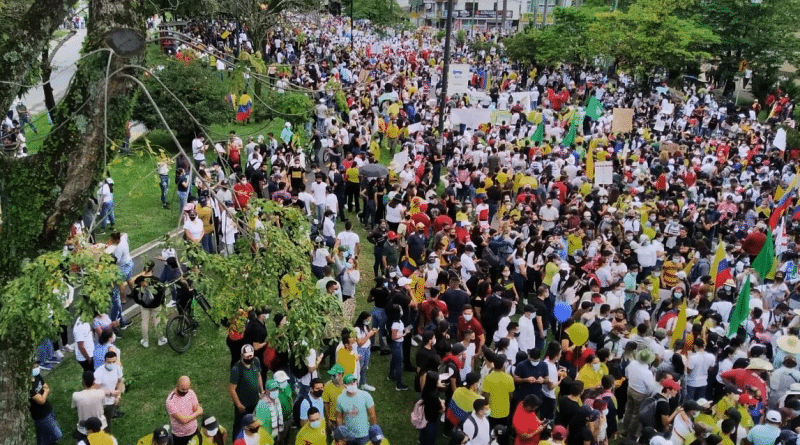 Representatives read a statement by the Committee: “We consider the announcement of the withdrawal of the tax reform bill as a triumph of the millions of Colombians who have mobilized and of the majority support that the citizenship gave to the National Strike. This happens after six days of National Strike in which civilian, military and police authorities have daily curtailed the freedoms and democratic guarantees for the exercise of social protest, which has left dozens of people murdered, hundreds injured and detained.

However, this announcement does not deactivate the mobilization. The people in the streets are demanding much more than the withdrawal of the tax reform.”

The Committee said that the government of Ivan Duque is seeking to reintroduce a new reform bill in Congress which will not be consulted upon with those who rejected the previous bill. Labour leaders accuse the government of exhibiting unwillingness to dialogue, and has instead stigmatized and carried out violence against demonstrators despite that the government had the opportunity to resolve the needs of the Colombian population and avoid this tragedy.

The National Strike Committee raises the following central demands: Democratic guarantees and freedoms and constitutional guarantees to mobilization and protest and the demilitarization of cities, cessation of massacres, punishment for those responsible and the dismantling of ESMAD.

Finally, the union leadership called for a mass mobilization to be held Wednesday, May 5th to make demands on the points outlined.

Human rights organizations in Colombia have expressed concern and are appealing to intergovernmental and international organizations to bring their attention to and denounce the serious violations of human rights, excessive use of force and abuse of power by the Colombian state, particularly the killings, injuries, sexual assaults and arbitrary arrests by Colombian police against demonstrators during the period of April 28 – May 2.

In addition to these unions which make up the National Strike Committee, protests across the country have been organized by other social movements and communities, with a range of demands.

The statement of the National Strike Committee can be read here and the press conference can be viewed here.