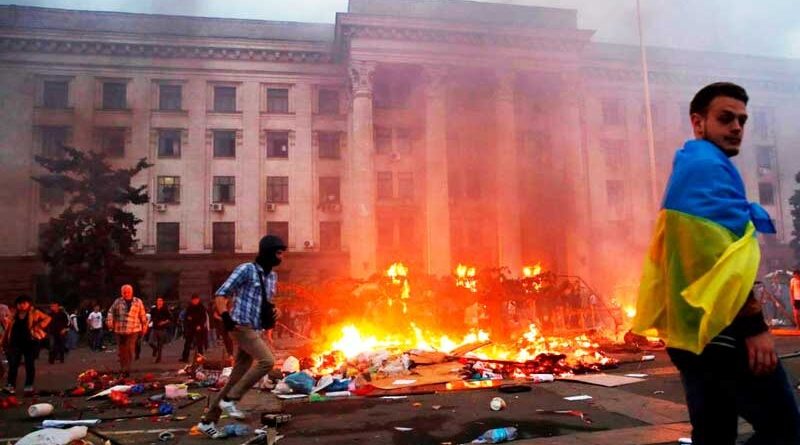 While workers, trade unionists, socialists and communists all over the world celebrate May 1st as International Workers Day we should pause and reflect on the tragic events that unfolded in Odessa on 2 May 2014.

A day many will never forget. The loss of life. The viciousness of an unprovoked attack and the tragic loss of life will live on the hearts and memories of their loved ones, friends family and comrades of those who perished in a blazing inferno.

This was no tragic accident. It was a premeditated assault, culminating in mass murder.

As yet the biggest crime of all, No one has been held to account.

The dead suffered injustice in life and this continues in death.

The background is simple enough to understand.

From the fall of the Soviet Union in 1991 America, the EU and NATI have been involved in the various colour revolutions and democracy movements to promote EU and western-style dominance in the Balkans and countries bordering on the Russian Federation.

Like the domino effect in Latin America, Estonia Latvia Lithuania alongside many other former Soviet Republics have joined NATO and the EU. Many of these pro-democracy movements were nothing more than funded arms of American foreign regime-change programmes.

The Soros Foundation, the State Department, the CIA among others promote support and finance many of the groups which are seen to spearhead calls for regime change.

Ukraine was no different.

In 2014 Ukraine had a democratic leader. This was no dictatorship. There were no claims of voter fraud. The people had spoken. They had elected a pro-Russian President.

The vehicle to destabilise the elected government would become the Maidan Square protests.

While the President and the government reflecting the will of the people were seen to favour ties with Russia, its former political ally, the protestors favoured a closer alliance with the EU. The American position was to further support these protests and destabilise the elected government.

It did this by financing the protestors and giving them political cover. The propaganda machine in western media was unleashed.

The protestors attacked the police who were unarmed with petrol bombs and guns. When the police responded they were accused of beating peaceful protests thus demonising the regime.

Some protestors were shot dead and some injured.

There are credible reports that these individuals were targeted and killed by some of the pro-western elements involved in the protest in order to indict the government.

These murders had the desired effect. The manipulation of public opinion in the west to call for the removal of the elected Ukrainian government.

Victoria Nuland claimed in an interview with CNN , the US had invested $5 billion in promoting democracy in the Ukraine. since 1991. Many claim this money helped birth the Maidan movement and financed it.

The Maidan Square had outcomes.

It emboldened, financed and encouraged the extreme right in Ukraine to oust the pro-Russian government through street violence and intimidation. reminiscent of the tactics the Nazis used before coming to power in 1936.

It also mobilized the forces in support of the elected government and called for federalisation to protect Russian speaking Ukrainians in the various oblasts of Ukraine.

The resulting fall of the government led to the breakaway secessionist Republics of Luhansk and Donetsk and saw the Crimea return to mother Russia.

The people asked for federalisation what they got was occupation with tanks and fascist volunteers.

The people fought back; they won and gained the independence that had not been sought but was forced upon them in order to protect their homes, families and communities.

Around 300 people had gathered at a protest camp near the trade union building in the centre of Odessa.

The people there were protesting in favour of the elected government and against the suspected coup.

That day a march by fascists would see 1200 right-wing thugs including right sector activists and 600 hundred ultra football fans, a violent section of football supporters, descend on central Odessa with the intent of holding a pro-unity march

The people at the camp had been collecting signatures calling for respect towards the Russian speaking Ukrainians and tolerance of communist history and the traditions of pro Russian Ukrainians.

There was violence on the march, two pro-Maidan and four pro federation protestors were shot dead in the skirmishes that followed.

The result of all this violence was a determination by those on the march to attack those at the camp.

After a street confrontations many of the people under attack took refuge in the adjacent Trade Union building.

The camp was burnt down and those taking shelter in the building were first attacked and then cruelly burned to death.

Some it is reported, tried to defend the building from the rooftop.

Online social media shows men with stacks and batons enter the building and systematically attack and beat men and women of all ages severely reportedly going from room to room. Women were reportedly raped and others severely beaten.

As the building burned some appeared on the window ledges in an attempt to escape the flames.

They were reportedly derided and jeered. Some who jumped from the burning inferno it is claimed were savagely beaten as they lay on the ground.

No one has ever been prosecuted with these brutal assaults inside and outside of the building nor indeed the fire itself.

42 people died in the fire.

32 from carbon monoxide poisoning and 10 from jumping from the fire. Some it was claimed were beaten to death.

The movement against the coup in Kiev folded after these brutal deaths. The fascists won. They had their coup and now Ukraine is a failed state with two breakaway republics.