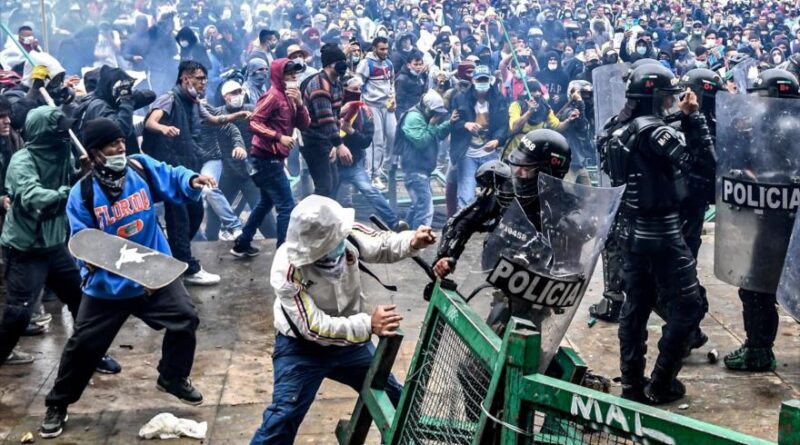 After several days of brutal police repression in Colombia, the local office of the United Nations finally raised its voice and recommended an investigation into the deaths of dozens of people in protests against President Ivan Duque. On the other hand, nothing have been heard from the Organization of American States (OAS), US Department of State, or Human Rights Watch (HRW)—other than a timid tweet posted on 3 May by HRW’s regional spokesperson Jose Miguel Vivanco.

Colombia has experienced massive protests since April 28 in rejection of a controversial tax reform project drafted by Ivan Duque’s government that according to demonstrators would affect the working class, and most vulnerable sectors.

Recent experience in Colombia raises questions on whether the police – and its anti-riot police force, ESMAD – are fit to carry out crowd control operations that respect basic rights.

Defender la Libertad, a network of human rights organizations, estimated that 21 deaths had occurred by May 1 alone, since the start of the mobilizations on April 28.

Much criticized for its passivity facing the killings of protesters, the United Nations (UN) finally expressed its “concern” about the human rights situation in the country on Sunday.

“We have followed with concern since 28A the situation of Human Rights in Cali, Cauca, Medellín, Bello, Pasto, Neiva, Barranquilla, Villavicencio, and Bogotá. We are in contact with the Public Ministry,” indicated the UN on Twitter.

The organization expressed its “condolences to the relatives of the people who have died, in the context of the demonstrations. We request investigation, prosecution, and punishment for all these murders. We are following up on the situation and possible [human rights] violations.”

The UN defended the right of people to assemble peacefully and asked the Colombian Executive to “respect and protect human rights.”

However, the UN made no reference to the numerous complaints made by human rights organizations and NGOs about the excessive use of force by riot control agents, and the arbitrary arrests of protesters by the Colombian state, highlighting that “most of the demonstrations have been peaceful.”

The UN’s tone of mild reprimand came as social organizations denounced the massacre of demonstrators by anti-riot agents in Colombia. “The Cali police have fired indiscriminately against the defenseless population, they have murdered minors, adolescents, and young people,” stated the Social Movement of Women of Cali. “Hundreds of women and men are wounded, in shock, and injured, several of them being incapacitated for life due to attacks on their person.”

Despite the fact that, on Sunday, Colombian President Iván Duque backed down and withdrew the tax reform, social movements have called for new protests, asking the president to “stop the massacre” and prosecute those responsible for the deaths.