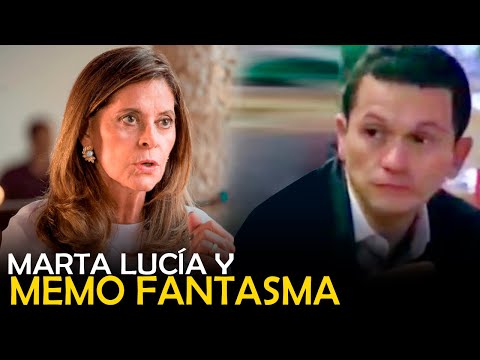 Colombian Vice President Marta Lucía Ramírez sued British journalist Jeremy McDermott, for perjury. The director of InSight Crime published a report in March that links her company and that of her husband, Álvaro Rincón, with the alleged drug trafficker Guillermo León Acevedo, known as “Memo Fantasma”.

“A complaint of aggravated pejury was filed against Jeremy McDermott, executive director and co-founder of InSight Crime, for the sole purpose that at or before the settlement stage, Mr. Jeremy McDermott corrects the inaccurate and erroneous information disclosed “The firm Víctor Mosquera Marín Abogados, representing Ramírez, said in a statement.

According to the plaintiffs, when the investigation was published, “The invisible drug trafficker: in the footsteps of Memo Fantasma,” McDermott was asked to “rectify or clarify the ambiguous and inaccurate information” which stated that “Ramírez had informed him that she personally knew Mr. Guillermo León Acevedo.”

However, adds the firm, the Vice President “unequivocally told him by phone and in his private chat that she does not know or has not had any relationship with Mr. Acevedo.”

That request for rectification took place last April, and when it did not obtain a result, the Vice President’s attorneys filed the complaint with the Attorney General’s Office.

InSight Crime noted that McDermott’s attorneys responded to the vice president’s request for rectification with a letter explaining “that the information obtained as part of the investigation was not denied or distorted by Ramirez’s conflicting statement.”

“Based on what we have published, I see absolutely no reason for any rectification. We understand the vice president’s concerns and will be willing to listen to them,” McDermott said, in a statement published by InSight Crime.

The journalist added: “We will attend to her claims and her explanations of why she feels that she has been criminally wronged and we will consider everything fully.”

In this sense, the research center clarified that “neither McDermott nor InSight Crime have said at any time that Vice President Ramírez was involved in any illegal activity. That was never the object of the investigation.”

The Committee to Protect Journalists (CPJ) said in a statement that, if found guilty of the crime of injury, “McDermott could be sentenced to between 16 and 54 months in prison and a fine of up to $ 375,000.”

“As a high public official, Vice President Marta Lucía Ramírez should expect the press to report widely on herself and should refrain from filing lawsuits against journalists,” said CPJ Coordinator of the Central and South American Program Natalie Southwick, quoted in the statement from that body.

Meanwhile, the Foundation for Freedom of the Press (FLIP) invited Ramírez to withdraw the complaint against McDermott and “to contribute information to the questions that are being raised against her.”

The vice president’s attorneys offered to “withdraw the complaint as long as the parties meet beforehand, listen to each other, and eventually, after reviewing the existing objective data, they can make a direct agreement on clarification and / or rectification” with FLIP as mediator.

Who is “Memo Fantasma”?

According to InSight Crime, “Memo Fantasma” was related to drug trafficking since the time of Pablo Escobar, head of the Medellín Cartel who was killed in December 1993 in a Colombian police operation in that city.

According to the investigation, the alleged drug trafficker went unnoticed by public opinion for decades, financed “the bloody rise of paramilitaries” and has already helped traffic hundreds of tons of cocaine.

The InSight Crime report indicates that the vice president and her husband developed a real estate project with their company Hitos Urbanos Limitada on a “Memo Fantasma” lot in Bogotá.

For this reason, the Prosecutor’s Office summoned Álvaro Rincón in an affidavit in May for an investigation against the alleged drug trafficker, although the lawyer Francisco Bernate, who represents the vice president’s husband, stated that his client was called as a witness and not as a defendant.

Bernate then added that both her client and the vice president are victims of a “smear campaign.”

Similarly, on July 21, a Colombian court imposed precautionary measures on eight properties that make up a hacienda in the department of Córdoba, valued at 9,000 million pesos (about 2.4 million dollars) and that are linked to the paramilitaries Autodefensas Unidas de Colombia (AUC) and “Memo Fantasma”.

The Prosecutor’s Office also established the links of Memo Fantasma with the Central Bolivar Block (BCB) of the demobilized AUC, which began “in mid-1998 until the demobilization of that armed group in 2006, being accused of being in charge of leading the activities of drug trafficking.”