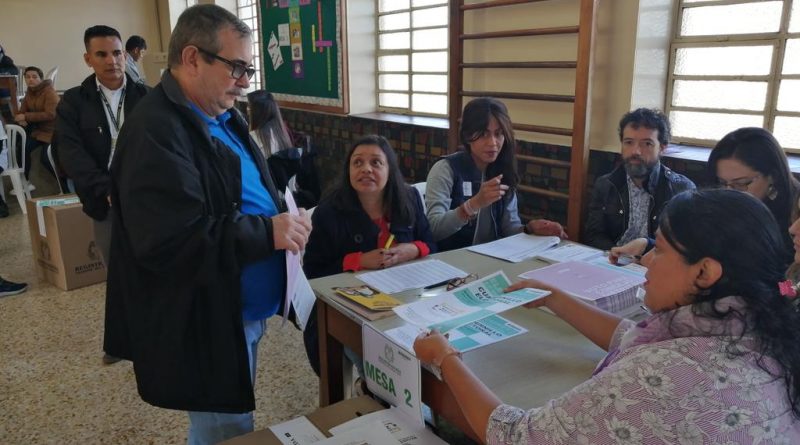 The Colombian National Registry announced ​​​​​the results of the local and regional elections held Sunday with the center-left obtaining big wins across the country.

Center-left Claudia Lopez, 49, stood out in these elections after she won the capital Bogota with 35.2 percent of the votes. Lopez, a symbol of the fight against corruption in the South American country, becomes the first woman and the first openly gay candidate to be elected mayor of the country’s capital.

The new and first female Mayor from Bogota, Colombia and her girlfriend celebrating victory after the elections. #LoveIsLove pic.twitter.com/SpBro7gYBr

“Thanks to the young people, to the women and the families, like mine! Not only did we win but we’re changing history!” Lopez said in her twitter account.

While in the northwestern city of Turbaco, ex-FARC combatant Guillermo Torres, known as Julian Conrado, won the mayoral race with 50.2 of the votes.

In the most economically dynamic departments, the chosen governors are center-left Carlos Caicedo with 60.3 percent of the votes in Magdalena, centrist Anibal Gaviria with 35 percent in Antioquia, right-wing Elsa Noguera who obtained 66.3 percent in the Atlantic and right-wing Clara Roldan with 55.9 in the Valle del Cauca.

According to the Electoral Observation Movement, 208 cases of irregularities were recorded during the day,  as well as the detention of 80 people who allegedly participated in corruption events.

Very bad night for center-right Duque in Colombia’s regional elections. If center-left presidential candidates win tonight in Argentina and Uruguay, it’s fair to say that rise of center-right (and far-right) candidates in Latam has fizzled out. Ahead: ideological fragmentation.

The elections were beset by violence in more than a quarter of municipalities, the electoral mission observatory said.

Former left-wing guerrilla FARC, who became a political party in the historic 2016 peace accord that ended more than 50 years of armed rebellion, participated in elections for the second time.