Ray McGovern reviews key pieces of background that — thanks to the media — few Americans know about the widest war in 77 years that is now on our doorstep.

Thanks to Establishment media, the sorcerer apprentices advising President Joe Biden — I refer to Secretary of State Antony Blinken, National Security Advisor Jacob Sullivan and China specialist Kurt Campbell – will have no trouble rallying Americans for the widest war in 77 years, starting in Ukraine, and maybe spreading to China. And, shockingly, under false pretenses.

Most Americans are oblivious to the reality that Western media are owned and operated by the same corporations that make massive profits by helping to stoke small wars and then peddling the necessary weapons.

Corporate leaders and Ivy-mantled elites, educated to believe in U.S. “exceptionalism,” find the lucre and the luster too lucrative to be able to think straight. They deceive themselves into thinking that (a) the U.S. cannot lose a war; (b) escalation can be calibrated and wider war can be limited to Europe; and (c) China can be expected to just sit on the sidelines. The attitude, consciously or unconsciously, “Not to worry. And, in any case, the lucre and luster are worth the risk.”

The media also know they can always trot out died-in-the-wool Russophobes to “explain,” for example, why the Russians are “almost genetically driven” to do evil (James Clapper, former national intelligence director and now hired savant on CNN); or Fiona Hill (former national intelligence officer for Russia), who insists “Putin wants to evict the United States from Europe … As he might put it: “Goodbye, America. Don’t let the door hit you on the way out.”

Absent a miraculous appearance of clearer heads with a less benighted attitude toward the core interests of Russia in Ukraine, and China in Taiwan, historians who survive to record the war now on our doorstep will describe it as the result of hubris and stupidity run amok. Objective historians may even note that one of their colleagues – Professor John Mearsheimer – got it right from the start, when he explained in the autumn 2014 issue of Foreign Affairs “Why the Ukraine Crisis is the West’s Fault.”

Historian Barbara Tuchman addressed the kind of situation the world faces in Ukraine in her book The March of Folly: From Troy to Vietnam. (Had she lived, she surely would have updated it to take Iraq, Afghanistan, Syria and Ukraine into account). Tuchman wrote:

“Wooden-headedness…plays a remarkably large role in government. It consists in assessing a situation in terms of preconceived fixed notions while ignoring or rejecting any contrary signs. It is acting according to wish while not allowing oneself to be deflected by the facts.” 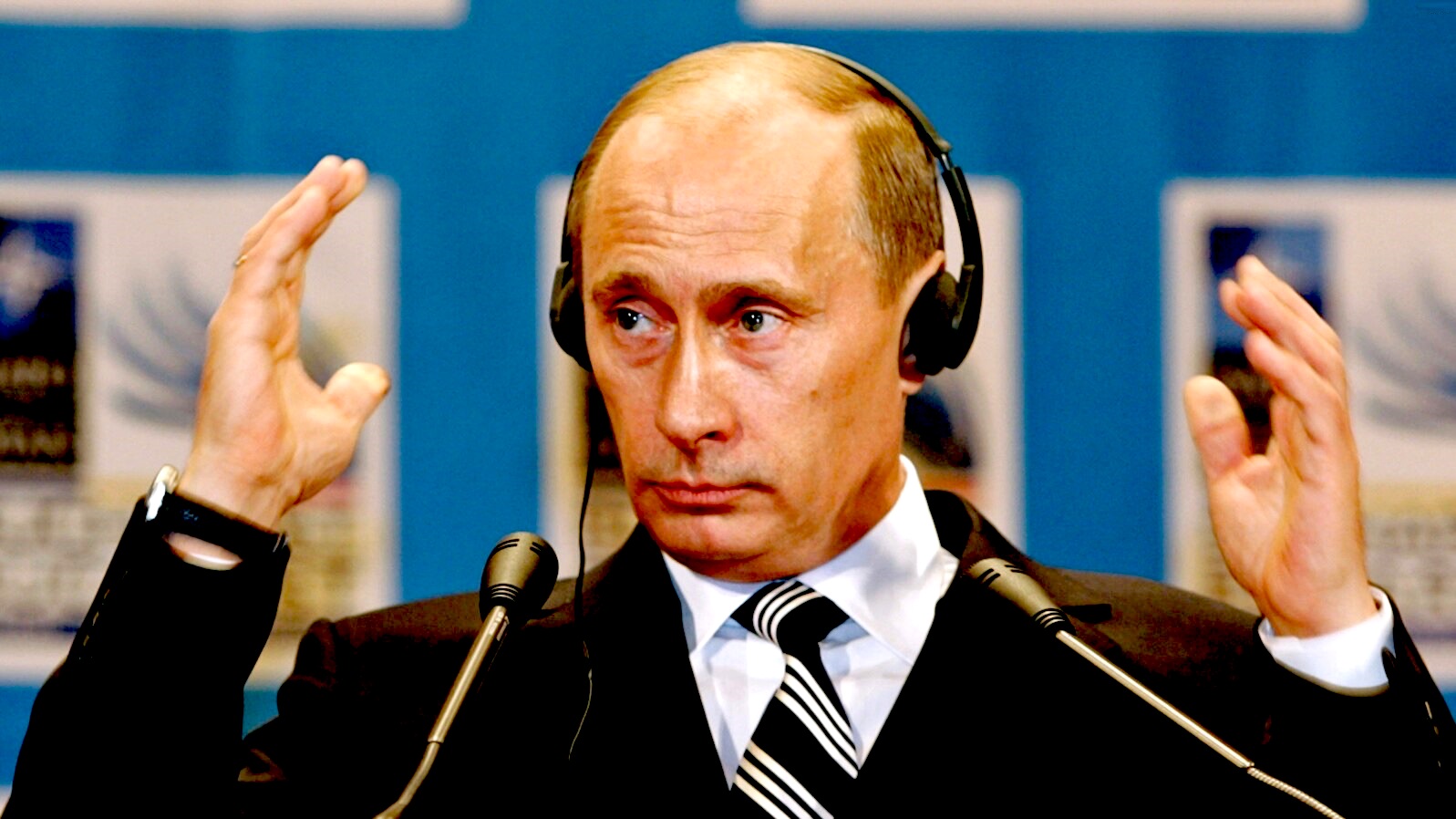 Vladimir Putin at an April 4, 2008, press-conference following the meeting of the Russia-NATO Council. (Kremlin.ru, CC BY 4.0, Wikimedia Commons)

Thanks to U.S. media, a very small percentage of Americans know that:

•  Fourteen years ago, then U.S. Ambassador to Russia (current C.I.A. Director) William Burns was warned by Russian Foreign Minister Sergei Lavrov that Russia might have to intervene in Ukraine, if it were made a member of NATO. The subject line of Burns’ Feb. 1, 2008, Embassy Moscow cable (#182) to Washington makes it clear that Burns did not mince Lavrov’s words. It stated: “Nyet means nyet: Russia’s NATO enlargement redlines.” Thus, Washington policymakers were given forewarning, in very specific terms, of Russia’s redline regarding membership for Ukraine in NATO. Nevertheless, on April 3, 2008, a NATO summit in Bucharest asserted: “NATO welcomes Ukraine’s and Georgia’s Euro-Atlantic aspirations for membership in NATO. We agreed today that these countries will become members of NATO.”

•  Eight years ago, on Feb. 22, 2014, the U.S. orchestrated acoup in Kiev — rightly labeled “the most blatant coup in history,” insofar as it had already been blown on YouTube 18 days prior. Kiev’s spanking new leaders, handpicked and identified by name by U.S. Assistant Secretary of State Victoria Nuland in the YouTube-publicized conversation with the U.S. ambassador in Kiev, immediately called for Ukraine to join NATO. 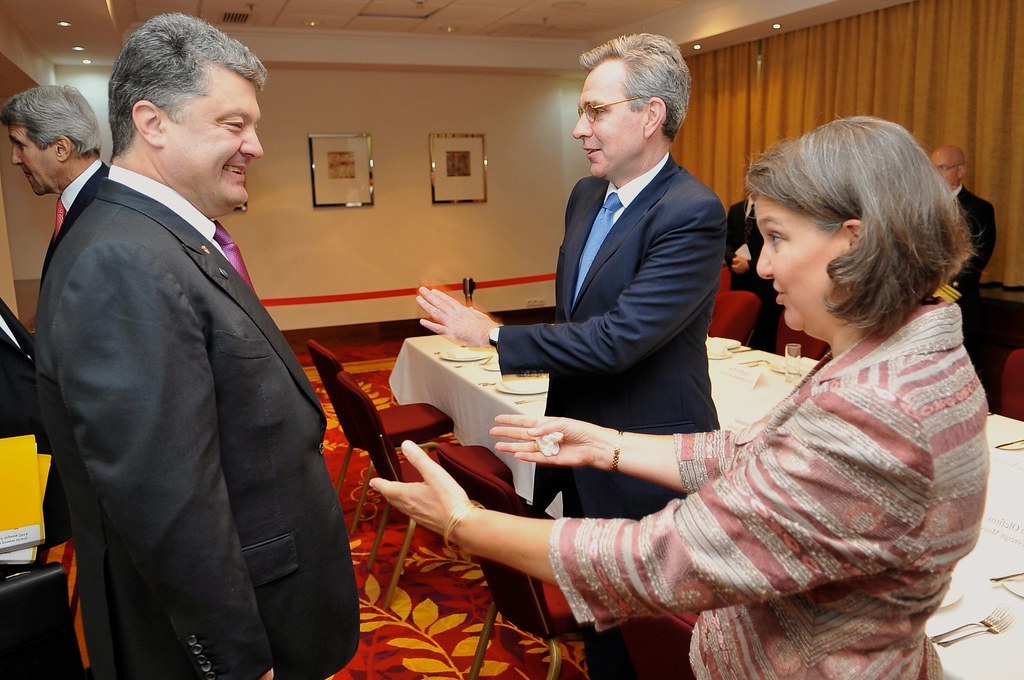 •  Six years ago, in June 2016, Russian President Vladimir Putin told Western reporters of his concern that so-called antiballistic missiles sites in Romania and Poland could be converted overnight to accommodate offensive strike missiles posing a threat to Russia’s own nuclear forces. (See this unique video, with English subtitles, from minute 37 to 49.) There is a direct analogy with the 1962 Cuban missile crisis when Moscow put offensive strike missiles in Cuba and President John Kennedy reacted strongly to the existential threat that posed to the U.S. 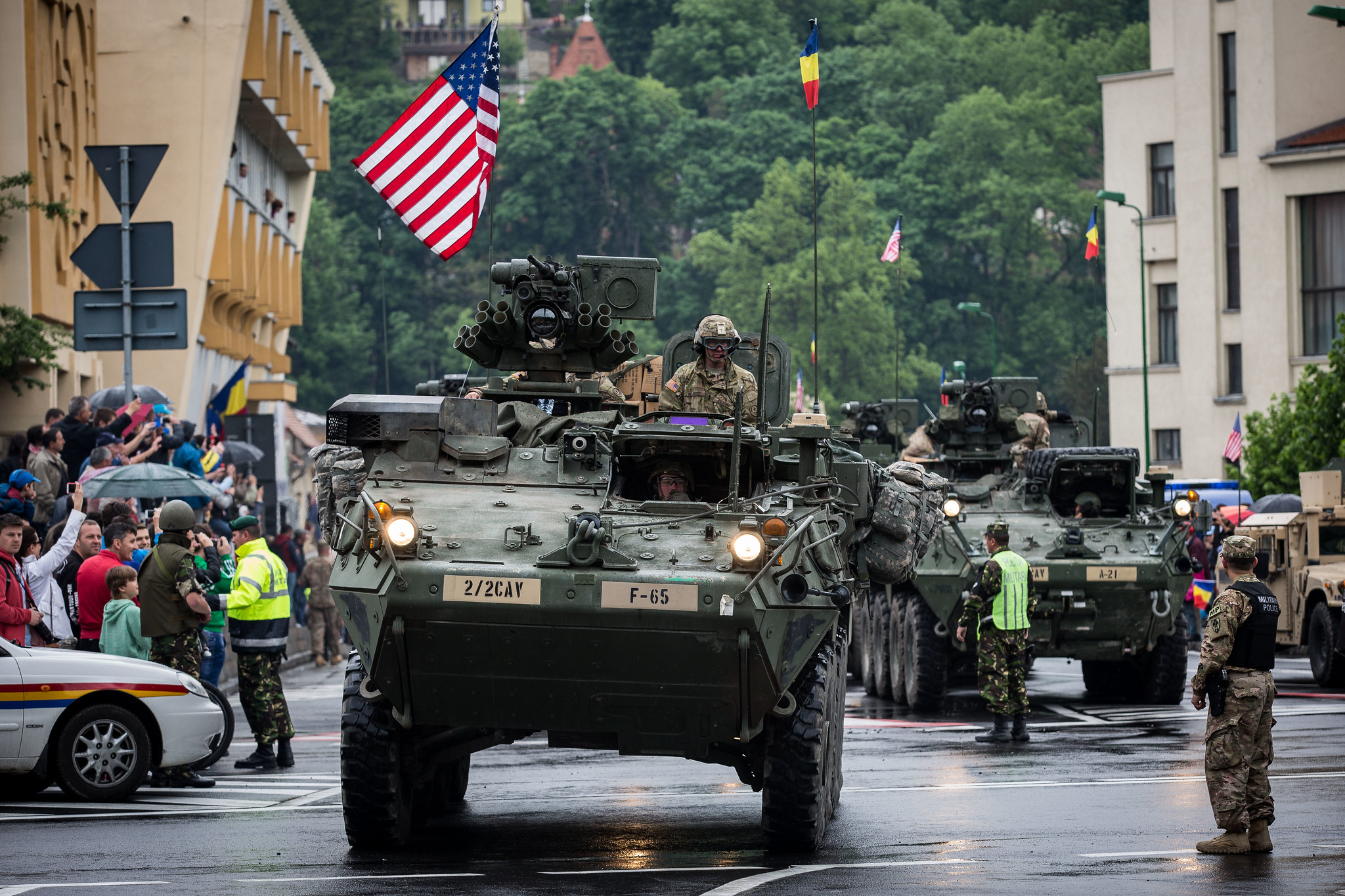 Armored vehicles from a U.S. regiment pull into the Romanian town of Brasov, May 14, 2015. (NATO)

•  On Dec. 21, 2021, Putin told his most senior military leaders: “It is extremely alarming that elements of the U.S. global defense system are being deployed near Russia. The Mk 41 launchers, which are located in Romania and are to be deployed in Poland, are adapted for launching the Tomahawk strike missiles. If this infrastructure continues to move forward, and if U.S. and NATO missile systems are deployed in Ukraine, their flight time to Moscow will be only seven to 10 minutes, or even five minutes for hypersonic systems. This is a huge challenge for us, for our security.” [Emphasis added.]

•  On Dec. 30, 2021, Biden and Putin talked by phone at Putin’s urgent request. The Kremlin readout stated: “Joseph Biden emphasized that Russia and the U.S. shared a special responsibility for ensuring stability in Europe and the whole world and that Washington had no intention of deploying offensive strike weapons in Ukraine.” Yuri Ushakov, a top foreign policy adviser to Putin, pointed out that this was also one of the goals Moscow hoped to achieve with its proposals for security guarantees to the U.S. and NATO. [Emphasis added.] 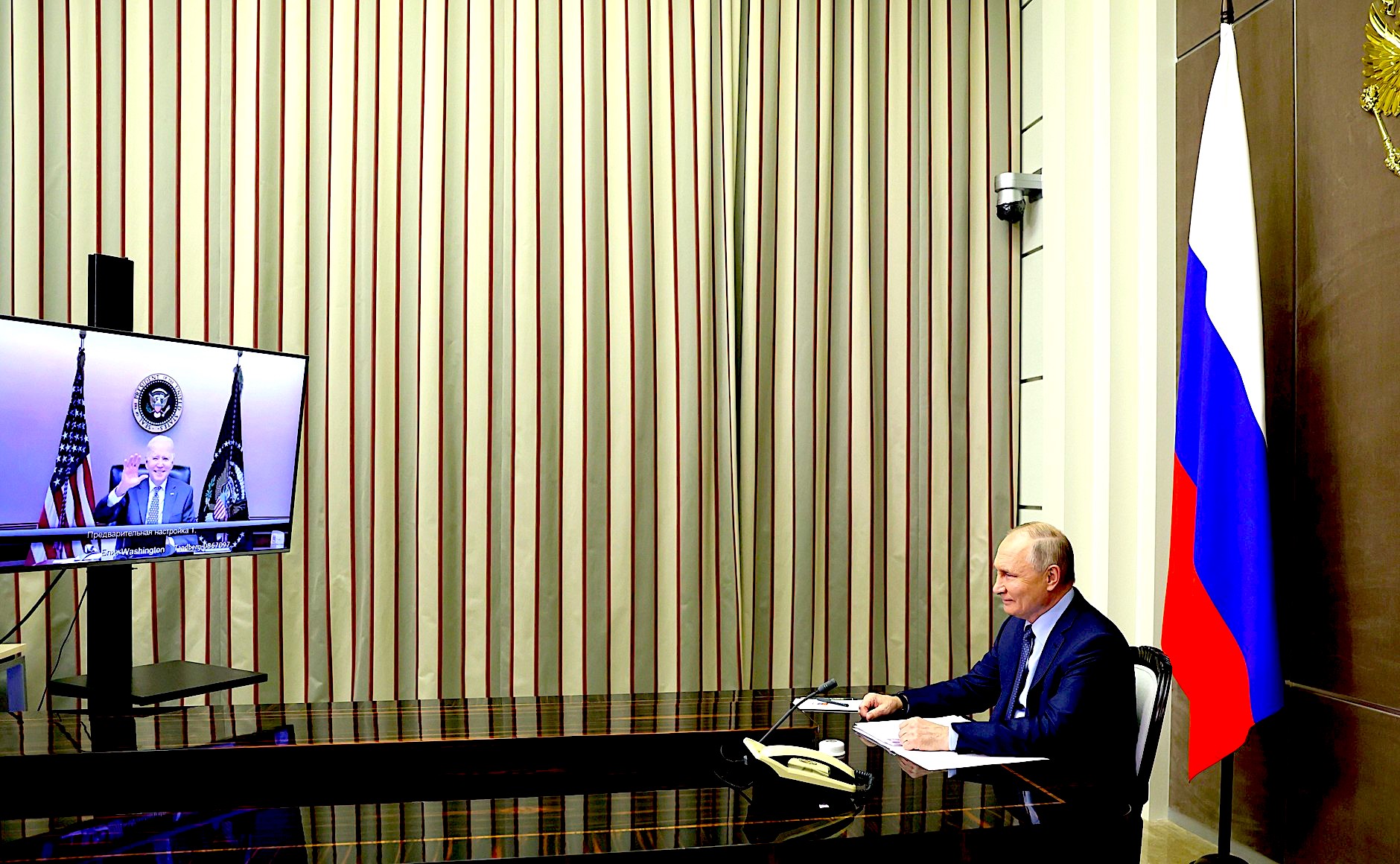 •  On Feb. 12, Ushakov briefed the media on the telephone conversation between Putin and Biden earlier that day. “The call was as a follow-up of sorts to the … December 30 telephone conversation. … The Russian President made clear that President Biden’s proposals did not really address the central, key elements of Russia’s initiatives either with regards to non-expansion of NATO, or non-deployment of strike weapons systems on Ukrainian territory … To these items, we have received no meaningful response.” [Emphasis added.]

Polls Show Almost No One Trusts US Media, After Decades of War Propaganda and Lies

Unprovoked?
The U.S. insists that Russia’s invasion was “unprovoked.” Establishment media dutifully regurgitate that line, while keeping Americans in the dark about such facts (not opinion) as are outlined (and sourced) above. Most Americans are just as taken in by the media as they were 20 years ago, when they were told there were weapons of mass destruction in Iraq. They simply took it on faith. Nor did the guilty media express remorse — or a modicum of embarrassment.

The late Fred Hiatt, who was op-ed editor at The Washington Post, is a case in point. In an interview with The Columbia Journalism Review [CJR, March/April 2004] he commented: “If you look at the editorials we wrote running up [to the war], we state as flat fact that he [Saddam Hussein] has weapons of mass destruction. … If that’s not true, it would have been better not to say it.”

(My journalism mentor, Robert Parry, had this to say about Hiatt’s remark. “Yes, that is a common principle of journalism, that if something isn’t real, we’re not supposed to confidently declare that it is.”)

It’s worse now. Russia is not Iraq. And Putin has been so demonized over the past six years that people are inclined to believe the likes of James Clapper to the effect there’s something genetic that makes Russians evil. “Russia-gate” was a big con (and, now, demonstrably so), but Americans don’t know that either. The consequences of prolonged demonization are extremely dangerous – and will become even more so in the next several weeks as politicians vie to be the strongest in opposing and countering Russia’s “unprovoked” attack on Ukraine.

Ray McGovern works with Tell the Word, a publishing arm of the ecumenical Church of the Saviour in inner-city Washington. His 27-year career as a C.I.A. analyst includes serving as chief of the Soviet Foreign Policy Branch and preparer/briefer of the President’s Daily Brief. He is co-founder of Veteran Intelligence Professionals for Sanity (VIPS).