The Bolivarian Republic of Venezuela participated at the XXVII Ibero-American Summit of Heads of State and Government, which took place in an online conference this Wednesday, April 21. As appropriate, the government of President Nicolás Maduro was represented by its Executive Vice President, Delcy Rodríguez. She gave a brief but forceful speech, adjusted to the regulations that govern speech rights in this international consultative forum. Two important moments are identified in her speech: the first came with the reiteration of the denunciation of the criminal blockade that curtails the fundamental rights of the Venezuelan population in the midst of a pandemic, now recognized as the worst and most widespread of all time.

Mainstream media, the US-financed regional “free press,” right-wing politicians and authorities have been calling to the organizers for weeks to forbid Venezuela to have its rightful representation at this summit. As the only Venezuelan authority recognized by the United Nations, President Maduro’s administration is the only one capable of having legal representation in this forum that has its organizational core in Spain, but also in the organizing country. This edition was held in Andorra.

President Maduro, trying to avoid a political circus during the summit and distract attention from the very important issues being discussed, decided to delegate his presence to Venezuelan Vice President, Delcy Rodriguez.

“Here in this Ibero-American community, where there are two countries that are victims of a criminal blockade, victims of illegal unilateral coercive measures, a lot can be done. You can build all the bridges, open all the spaces for communication and dialogue,” she said diplomatically as an introduction to the core idea. “Here in this Ibero-American community there are kidnapped resources of the Venezuelan people,” she continued, now in a denunciatory tone.

She then directly requested the authorities of the Portuguese Republic to take the steps that their authority allows to liberate Venezuelan funds seized in Portuguese banks.

“I ask the President of Portugal, the Prime Minister, whose intervention I welcome, to cooperate so that the people of Venezuela have access to their resources, their heritage, and to take care of this pandemic.”

Without political constraints or double standards
The Venezuelan Vice President added that it is urgent to put aside the “political conditions” and “double standards.” She gave as an example that, even though the International Monetary Fund itself has defined, due to the crisis, special rights for all the countries of the international community, Venezuela has been excluded. “This is for political reasons,” argues Rodríguez in her speech.” That should be a call to reflection, we must add common spaces of cooperation,”  she added.

She closed her words by recalling, in line with the multiple calls from the United Nations (UN) and the World Health Organization (WHO), that it will not be possible to overcome this pandemic and its serious consequences in the most diverse areas without cooperation. 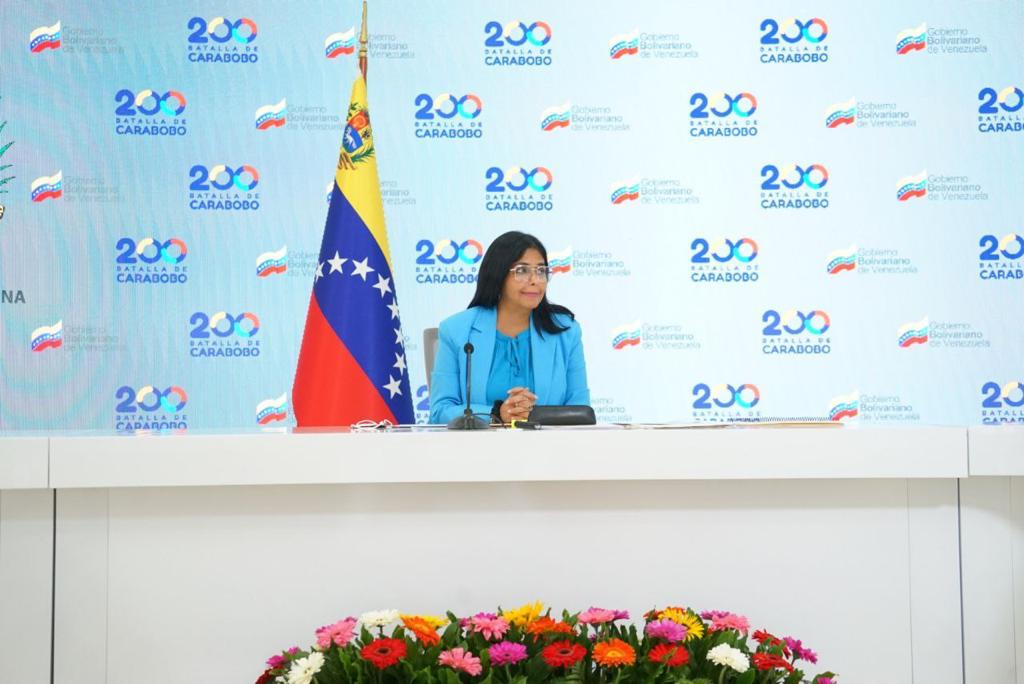 Delcy Rodríguez responds to Duque
The second moment of political significance came when the top Venezuelan officer responded to the president of Colombia, Iván Duque, after his unfounded accusations and lies against Venezuela. This is how Delcy Rodríguez said that Duque’s is one of the “minor voices of intolerance.”

RELATED CONTENT: SINCO: The Digital Project That Interconnects the People’s Power in Venezuela

“If humanity saw itself in it as a mirror, the results would undoubtedly be apocalyptic, a terrible facsimile of failure. The failure to guarantee peace to the people of Colombia, the failure to eradicate drug crops,” she said.

“It is incredible that in this pandemic, Colombia, the world’s leading producer of cocaine, has increased its production, also begetting a public health situation even more serious than the pandemic itself, disrupting international financial systems. She clarified that Venezuela had welcomed 6 million Colombians during 70 years of Colombian war and never issued an international report to serve as a kind of “plea for the migrants that we received with love and serve with great dedication.”

She concluded by saying that “from Venezuela we reject any type of claim that our sacred Bolívar’s land is used for drug trafficking or for the narco relations of Colombia, the cartels and United States agencies.”

She also echoed the words of Cuban president, Miguel Díaz-Canel Bemúdez: “The legitimacy of a country, of a government, of a State, lies in popular sovereignty. Those who speak of democracy must respect the will of the people of Venezuela who have chosen their authorities and their destiny within the framework of the principle of self-determination.”

Productive Summit
In the opinion of the Venezuelan official, this has been one of the most productive summits in terms of coincidence of visions and proposals. “We have the opportunity to do better,” she invited of her peers.

“A summit that takes place in the middle of one of the worst pandemics that humanity has ever experienced. The pandemic did not arrive at any time (…) It arrived like a glove in cities agglutinated by the predatory capitalistic model, in spaces inhabited to the detriment of the rights of nature. In 2020, when the big lockdown occurred, we could see how Mother Nature had a chance to breathe.”

She reflected that the COVID-19 pandemic has deepened the asymmetries and inequalities that prevail in the world. She brought up two data contained in the latest Oxfam report: one thousand richest people in the world have recovered in just 9 months what they lost in the pandemic, while it will take the poor decades to achieve a recovery. In addition, with the money accumulated among these thousand people, all the peoples of the world could be vaccinated. “There is very clear evidence of the inequality evidenced in this pandemic,” said the Venezuelan top official.

Finally, Rodríguez congratulated the government of the Principality of Andorra for “having carried out this summit in undoubtedly unprecedented and special conditions.”

Featured image: Maduro’s administration represented by its Vice President Delcy Rodriguez at the Ibero-American Summit this Wednesday, April 21, disregarding all the complaints of right-wing governments (Photo courtesy of Prensa Presidencial)