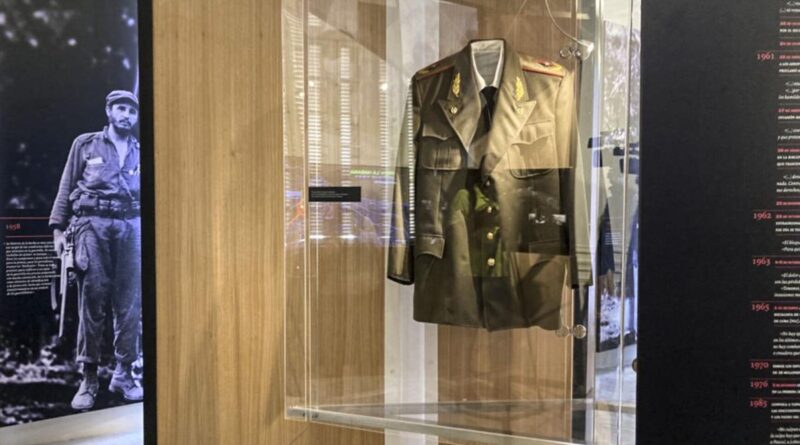 I recently had the opportunity to visit Cuba through a friendship Caravan with IFCO and Pastors for Peace. It was an incredible delegation of 71 people, representing 19 states across the US, traveling to represent the majority of people in the US who do not agree with the illegal US blockade on Cuba. For most of my 10 days in Cuba I tried to play it cool, even though with it being my first real time out of the country, I felt overwhelmed the entire time. I kept it together though, for most of the trip, until our visit to the Centro Fidel Castro Ruz. It’s a museum dedicated to Fidel Castro, hero of the Cuban Revolution. And it’s a museum where I bawled my eyes out.

The Centro Fidel Castro Ruz is like no other museum I’ve ever seen before. From the moment you walk in on the first floor, you get an intimate look at Fidel’s childhood. You see pictures of him as a young boy, you see him in the context of his mom, his friends and classmates. You get to see the books he read with his markings and highlights intact. You get an appreciation for all of the ways he was inspired by José Martí. But as much as the museum is a memorial of Fidel, it is a remembrance of all of the brave Cuban men and women who made the victory of the Cuban Revolution possible. The Centro Fidel Castro Ruz has interactive video displays that, in almost a video game sort of way, give you the play-by-play of the tactics deployed to defeat the US in the Bay of Pigs invasion. It has ceiling to floor length tributes dedicated to the story of the La Coubre explosion.

But what really sets the Centro Fidel Castro Ruz apart is not what it contains, but who it was created for. During his lifetime, Fidel made it law that no one could ever name anything after him. He did not want streets or hospitals or airports named in his honor. The revolution was in 1959. Fidel died in 2016. It is just this year, 2021, that the people of Cuba have broken his rule, just a little, to finally create a museum in his honor. They saw this as a necessary thing to do because a new generation of Cubans now exists on the island — a generation of Cubans who’ve never had the chance to meet Fidel. A generation that will never have the chance to stand and hear his speeches or be greeted by him in their schools. With the US constantly smearing and launching attacks against his legacy in Western media, Cuban people are now having to wage a war inside of their country to protect their youth from capitalist influence. The rise of “anti social media ” and the ease with which young Cubans can access viral content, tweets, WhatsApp messages and music videos means Cuba is in the tough position of finding a way to preserve the meaning of its revolution in a world that wants the revolution itself to be seen as “state propaganda.” With this in mind, the Centro Fidel Castro Ruz isn’t heavy handed. It doesn’t force. It doesn’t tell. It teaches.

Outside of the Centro Fidel Castro Ruz there’s a beautiful covered structure surrounded by plants native to all parts of the island— the cork palm, the big belly palm, the Cuban Magnolia, which is found in the forests of the Sierra Maestra mountains, the launching pad of the revolution. Underneath the structure there’s a screen with a built in video game. The game is designed for students to form teams that answer trivia questions about the revolution. When you select the wrong answer, a short blurb appears on screen that explains what you missed. Across from that, there’s a walkway surrounded by trees that are not native to Cuba. Among the many is a Bird of Paradise plant from South Africa and a Moriche Palm Tree from Venezuela. They are trees and plants that represent the many people of the world that have demonstrated friendship with the people of Cuba. There you can find a mini amphitheater, with seats designed with kids in mind. The museum intends to make the theatre available to teachers with classrooms big and small.

Back inside of the museum there’s something of a tech lab. The walls are covered in a huge digital map of the world. The map holds huge cylinder shaped objects tucked into various locations on the wall that represent countries on the map. They twinkle on the wall, glowing red and green. You can remove the cylinders from the wall and insert them into a digital table mounted to the floor. When inserted into the table, the cylinders will bring up videos and graphics about Cuba’s humanitarian efforts in that country. It’s an entire room dedicated to illustrating Cuba’s history of solidarity. It’s meant to be touched, and swiped, and felt. It’s made to teach a new generation what it means to be Cuban. I find it hard to believe that Fidel’s spirit is too mad at that.

But that’s not where it happened. It didn’t happen until our tour guide walked us upstairs, to one of the final rooms. This room was dedicated to the program of the Cuban revolution. Six pillars that stood in the middle of a white room that represented the six problems that Fidel and the Cuban people sought to correct through revolution:

Each six of these pillars represented issues that long plagued Cuba’s history. Issues that once meant death, that meant poverty, that meant discrimination, that meant despair. Each of these six pillars represented issues that were addressed with revolution. On the issue of education, our tour guide took a few minutes to talk to us about how the Cuban government addressed the issue of student education during the pandemic. She talked to us about how the government repurposed national television for classroom instruction. She talked to us about how the CDRs (Committees for the Defense of the Revolution) took on the responsibility of ensuring that the children in their neighborhoods weren’t missing out on anything related to school. And then, she pulled out her phone to show us a WhatsApp group she’s in, full of the other mothers in her neighborhood, working together to help their children with their school work. It was right around there that a comrade and I started to lose it.

A few mornings later, I’m sitting at a dinner table in Matanzas with a table of older white people. A lovely lady named Cheryl is talking to them about Hurricane Katrina, and how Fidel attempted to send 1,500 medical personnel into the US to help. She’s telling them about how George Bush refused their entry and I realize that my face is wet with tears again. It’s 8 o’clock in the morning and I’m trying to explain to this woman I’ve never met why I’m crying over the eggs in front of me. I can’t explain why I’m thinking about that room at the museum with the digital map and cylinders. How there were glowing red and green dots all over that map but not in the US. I’m crying because I wish there was a cylinder that could have pulled out from the area representing Louisiana. I’m trying to explain that I’m crying because I’m thinking about all of the Africans in Louisiana who were shot down by white cops and vigilantes while seeking food and shelter during Katrina. I’m crying and thinking about how the US government watched so many people drown and starve and bleed out and did nothing. I started thinking about the transatlantic slave trade and I cried a little more. I cried thinking about the fact that my people never even asked to die in Louisiana. Or Mississippi. Or anywhere in the United States. I’m crying because there’s no words in the English language to describe the kind of anguish I’m feeling, but it’s the only language I know. I’m crying because the only reason I speak English is because of colonial conquest and domination. I’m crying for all of the things that have been stolen, all of the things we’ll never recover.

I cried thinking about how people in the US hate Fidel because he took the revolution in Cuba to the natural conclusion that was never reached in the US South during reconstruction– land reform and a purging of the racist scum. I’m crying and thinking about El Hajj Malik Shabazz. I realize I don’t know how to explain to this table that I’m crying because all of our African heroes in the US are dead, exiled or in jail. There are no museums in their honor, and the museums that have been erected to try only sanitize and co-opt their legacies. I’m crying because I’m thinking about Flint and Baltimore and Brooklyn and Charleston and Ferguson. I’m crying thinking about the million different mini Obama shrines in the homes of family and friends I’ve seen throughout my life. I’m crying and thinking about what it means to live in a world where it’s not even safe for me to wear a Castro t-shirt in the airport when I go home, but it’s totally normal to hang a portrait of Barack Obama on my wall. A world where people don’t even know who Mumia is. A world where a colonial puppet like Obama is what I’m supposed to strive to be.

Salifu Mack is a Pan African socialist and member of the Black Alliance for Peace, the AAPRP, and the Lowcountry Action Committee, which is a Black-led grassroots organization dedicated to Black liberation through service, political education, and collective action in the Lowcountry of South Carolina. Follow us on IG to support our work: @LCTakesAction