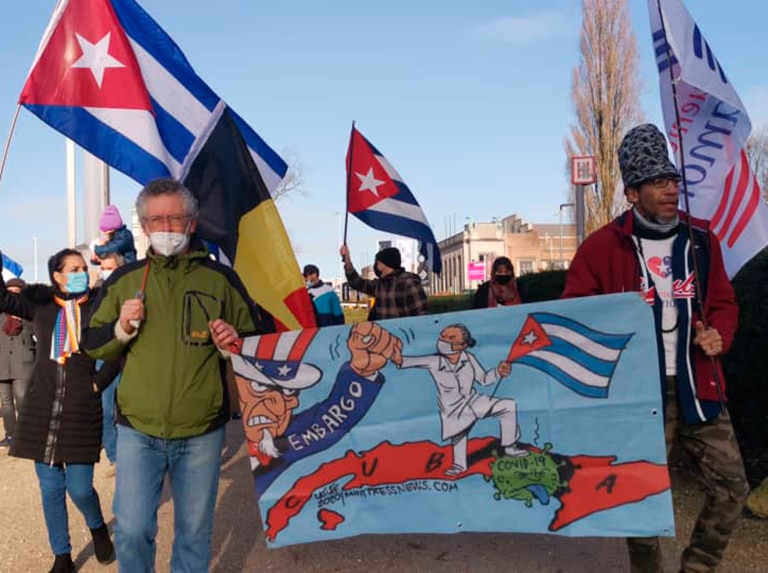 This Sunday, January 30, on the streets of Cuba and other parts of the world, the demand for lifting the illegal US blockade against Cuba prevailed. This came just days after the 60th anniversary of the officialization of this hostile policy against the Caribbean island.

According to the Twitter profile of the Cuban Foreign Affairs Ministry, from the cities of Santa Clara in the center of the country, and Bayamo in the east, the family of the Antillean nation joined a caravan that demanded the end of the economic, commercial and financial siege.

“Compatriots residing in Italy and friends of #Cuba build #PuentesDeAmor and demand the end of the blockade that hit this Island 60 years ago,” published the Twitter account of the Ministry of Foreign Affairs, since the initiative is also engaged with other cities around the world.

“Sincere thanks to those from the #USA and different cities around the world calling for an end to the blockade against #Cuba and defending and building #BridgesOfLove between our peoples,” wrote Cuba’s Ministry of Foreign Affairs on Twitter.

Likewise, social media platforms have revealed actions that took place this January 30 in Brussels, where once again the emblematic Plaza del Atomium welcomed Cuban residents and Belgians in solidarity with the island, with flags and banners demanding the end of the suffocating economic measures, according to a Prensa Latina report.

As part of the initiatives rejecting the unilateral siege, the website of the Cuban Institute of Friendship with the Peoples announced the start of the campaign “Tons of Solidarity against the Blockade,” which was launched by 57 organizations that cooperate with the Cuba in Spain.

“The economic blockade has punished several generations of Cubans spanning over 60 years. It was strengthened with special cruelty since the beginning of COVID-19, a vile and unforgettable crime,” Cuban Vice Minister of Foreign Affairs Carlos Fernández de Cossío also wrote on his Twitter account.

Next February 3 will be the 60th anniversary of the signing by the then US president, John F. Kennedy, of the Executive Order 3447, which made the blockade official as a legal instrument against Cuba.

This Sunday, the president of Cuba, Miguel Díaz-Canel, condemned the “appalling and obsolete policy” of US economic sanctions against his country.

“There are already 60 years of resistance and we are not going to get tired of demanding the end of an atrocious and obsolete policy,” the Cuban president wrote on Twitter.

His statements coincided with the celebrations in various parts of the island of acts against the economic, commercial and financial sanctions of the United States against Cuba.

The main events took place in the cities of Santa Clara (center) and Bayamo (east): popular caravans against the blockade, in which hundreds of people participated on buses, trucks, motorcycles, bicycles, and on horseback.

Events against the blockade also took place in different cities around the world, from Miami (USA) to Belgium, Bolivia, Tunisia and Italy.

This initiative arose to make visible the damage of this US measure in Cuba, which is contrary to international law and causing economic suffocation.

The current crisis that Cuba is going through, with a shortage of basic products and high inflation, is also due to the COVID-19 pandemic.

The sanctions have been progressively tightened over the years, with the exception of the so-called “thaw” promoted by Presidents Barack Obama (USA) and Raúl Castro (Cuba).

Former US President Donald Trump gave the last twist to these sanctions, with a new package of more than 200 restrictions. The current US Democratic administration has kept them for the time being.

The UN General Assembly has spoken out against the US embargo 29 times, the last time was in June 2021.