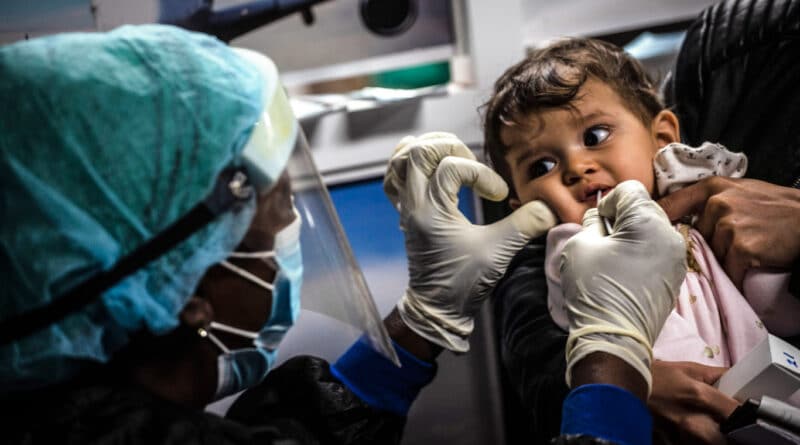 Cuba is already a medical powerhouse, and if it can successfully navigate the minefield of US sanctions, it could supply much of Latin America with a COVID vaccine.

Cuba has announced positive and promising results for a number of separate COVID-19 vaccines it is currently developing, but U.S. sanctions against the small island nation are hampering the development and rollout of the potentially life-saving treatments.

Two candidates, named Sovereign 1 and Sovereign 2, have generated antibodies blocking infection in animals and are showing similarly encouraging signs on tests on human subjects. Meanwhile, a separate vaccine, based on a protein from the hepatitis B virus, is unique in that it is delivered through the nasal tract and does not require a needle to administer.

Should any of these efforts ultimately succeed, the Caribbean nation — already a medical powerhouse that has developed a lung cancer vaccine and methods to stop mother-to-baby HIV and syphilis transmission— will likely become an important supplier to other Latin American and developing countries who have been effectively shut out from purchasing COVID vaccines from Western companies, as rich nations have already begun hoarding coronavirus medicines.

Dr. Helen Yaffe of Glasgow University, author of “We Are Cuba!: How a Revolutionary People Have Survived in a Post-Soviet World,” was impressed and heartened by the news, telling MintPress:

“Cuba now has four COVID-specific vaccine candidates under clinical trial. The fact that a small Caribbean island can achieve such a remarkable feat is testimony to its state-owned biotech sector, which is directed towards public health demands and integrated into its healthcare and education systems. After years of being told that only the market can lead to efficiency and innovation, Cuba’s socialist planned economy demonstrates what is possible when there is political will, good coordination, organization and the priority of social welfare.”

However, Cuban immunization developments are being seriously hamstrung by the actions of the U.S. government, primarily due to the decades-long blockade on the island, something which the Cuban government estimates has cost it over 750 billion U.S. dollars.

As Reuters reported, cash-strapped Cuba cannot afford to buy the raw materials necessary to upscale its vaccine development to help other countries. Hospitals face huge obstacles importing lifesaving equipment from abroad due to the blockade, while the sanctions force the country, which imports the large majority of its staples, to spend far more on food than other nations. As a result, almost one third of young children suffer from anemia due to the monotonous and sub-par nutrition available, according to the World Food Program.

The blockade also forces Cuba to continually repair its crumbling infrastructure and halt the importation of vehicles, even leading to a return of horse-drawn carriages on the island. Food production is hampered; with little petroleum available for agriculture, the country instead went back to relying on human or animal labor. The blockade also led to the forced development of a domestic pharmaceutical and biotechnology sector, which has grown to become among the most advanced in the world.

Last November, the United Nations voted 187-3 in favor of ending the blockade (with the U.S., Israel, and Brazil voting “no”). Almost two-thirds of Americans support an end to the action as well. Despite this, the Trump administration has, in fact, intensified the pressure on Cuba, as Yaffe explained:

“Cuba has been subject to an additional 46 sanctions and new measures to tighten the blockade, to scare off foreign investors, to create scarcity, to create difficulty for Cuba to access raw materials, including for its biotech sector and for its pharmaceutical industry.”

One example of this, Yaffe notes in her new documentary, “Cuba and COVID-19: Public Health, Science and Solidarity” is that the island can no longer purchase ventilators or parts for existing machines because the Swiss company it dealt with was purchased by an American one and fearing potential reprisals, it halted any contact with Havana.

A more positive, but nevertheless difficult, challenge the Cuban government faces in testing its new vaccines is the lack of COVID-19 patients on the island, which has the highest proportion of medical professionals per capita anywhere in the world. To date, the country has recorded only 7,639 cases and 131 deaths. U.S.-backed conservative neighbors such as Brazil, Ecuador, and (until last week) Bolivia, that had expelled Cuban doctors working inside their borders, have fared far worse.

Under Trump, the U.S. also led the world in the theft of medical equipment and personal protective gear, confiscating shipments, and diverting supplies away from other countries to keep for itself. And at the height of the outbreak in Iran, the government was unable to buy or import lifesaving gear due to American sanctions, as no nation was willing to risk the wrath of Secretary of State Mike Pompeo, who threatened harsh sanctions on anyone willing to do business with Iran. Finally, the World Health Organization directly intervened, gifting Iran supplies, sparking the Trump administration to leave the WHO among other reasons.

The U.S., along with other wealthy nations, has also been quietly buying up the majority of any future supply of vaccines, cornering the market, and leaving little hope for developing nations to secure their own supply of vaccines. The for-profit corporations conducting the research have made it clear that they intend to withhold production secrets in order to cash in. Furthermore, they do not have the capacity to immunize the entire world. U.S./German company Pfizer, for example, predicts that it could supply enough for only around 650 million people by the end of 2021. This is why the development of treatments outside the for-profit model is so important.

Today, Pfizer announced that its own trial, featuring over 43,000 people in six countries was a success, with a 90% immunization rate and only 94 people contracting the virus from the vaccine. Massachusetts-based Moderna claims that its vaccine is even more effective, with a 94% immunization rate, and does not have to be stored at -80°C temperature like Pfizer’s offering.

The first country to announce a potential vaccine was Russia, however, the government sharing the news in September, with researchers claiming “Sputnik V” was 90% effective and that Russia could produce 500 million doses annually. The Russian and American offerings appear to be based upon the same scientific logic and have produced broadly similar results. However, the Russian vaccine has been near-universally panned in the Western press, while the American ones heralded as a historic achievement. Thus, Sky News’ headline described Pfizer’s breakthrough as a “great day for science and humanity” while casting doubt on the validity of Sputnik V, claiming the Russian’s secretive approach is a throwback to “its spirit in the Cold War.”

Regardless if any or all of the treatments work, the world will need a sustained and coordinated international effort to immunize itself against COVID-19, as no one company can possibly supply the entire planet. By continuing the blockade against Cuba, the U.S. government might be condemning much of the world to living months longer under a deadly pandemic that has claimed the lives of over 1.32 million people.

Featured image: A Cuban health worker collects a sample for a COVID-19 test from a baby who arrived in a flight from Mexico at the Jose Marti International Airport in Havana, Cuba, Nov. 15, 2020. Ramon Espinosa | AP