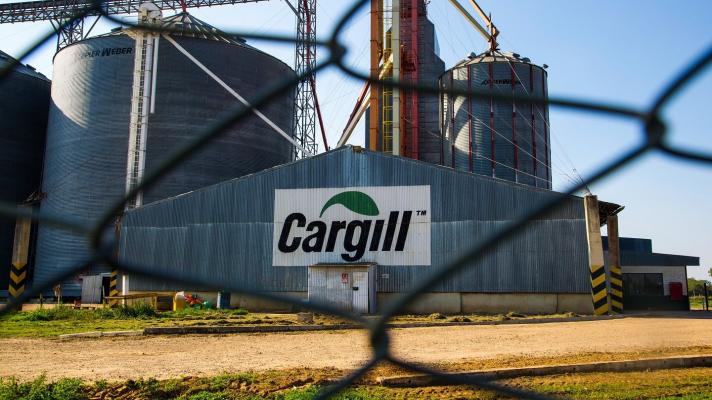 Cargill, one of the main corporations of Venezuela’s agro-industrial sector which, announced the sale of all its Venezuelan assets, a liquidation that will allegedly take several months to be completed. With two other companies, Cargill controls the oligopolistic national and transnational food industry in the country,

This decision was made five years after the start of the US blockade against Venezuela, during a time of global pandemic, and on the eve of the December 6 parliamentary elections on  in Venezuela. The news spread on national and international media, where speculation was made that the decision was due to the economic recession and, of course, “because of Chávez,” because of “the Government of Maduro,” or “the twenty years of the Bolivarian Revolution.”

It has even been stated that the departure is caused by the impact of the CLAP subsidized food program. CLAP was launched by the national government in 2016 in response to the US blockade that—aiming to achieve the longed awaited “regime change”—targeted Venezuelans’ access to food.

However, it’s not surprising that this food program, included in the scope of the sanctions, is manipulated and used in the media as one of the causes. The giant transnational corporation Cargill, the largest privately held corporation in the United States in terms of revenue, made the decision to sell its assets to the investment firm represented by Phoenix Global Investment and the Puig Group, successor of Jose Puig & Company,  established in Caracas in 1911, and now operating under the name Fábrica Nacional de Galletas. The company changed its name when bakeries began to diversify in Venezuela with imports of wheat by England’s John Boulton.

What we need to ask is, why did one of the largest companies in the control of global agribusiness, which has even been compared with ExxonMobil for agricultural markets, continue to operate in Venezuela, even with sanctions and the economic blockade imposed by the United States, its country of origin?

First, because of its role in the conglomerate of companies formed in 1940 by the Rockefeller Foundation, among the best-known corporations of North American origin, which were used through the Green Revolution to expand the foreign dominance by the United States in the food sector, closely associated to the hydrocarbon industrial complex.

The Rockefeller Foundation, which in Venezuela was represented by the Creole Petroleum Corporation, a subsidiary of Standard Oil (now ExxonMobil), owned 95% of the property. In the 1940s, this subsidiary was the largest oil producer in the world.

It may also be because of what Senator Frank Church claimed, referring to the grain corporations, and the scandal at the time over the discovery of Cargill’s business with the Soviet Union in 1972, outside the knowledge of the United States: “No one knows how they work, what their profits are, how much they pay in taxes, and what influence they have on our foreign policy.”

When the ravages of the pandemic in the United States began, Trump announced the formation of the Great American Economic Revival, formed to work in coordination with the White House as part of the model of “a path to unprecedented American prosperity,” in the face of the impact of COVID-19, in the agriculture sector. This group included American Farm Bureau Federation, Sysco Corporation, Tyson Foods, Inc., Perdue Farms, Inc, ADM, Corteva Agriscience, Tractor Supply Company, Seaboard Corporation, Grimmway Farms, Mountaire Farms and, of course, Cargill Inc., led by CEO David MacLennan. The main objective: “To form a more independent, self-sufficient and resilient [U.S.] nation.”

The truth is that Cargill, being a North American transnational, continued operating all these years in this country under a blockade, where orders or financial transactions for food purchases related to the Bolivarian Republic of Venezuela are pursued by Washington, so much so that they have sanctioned Mexican companies for selling food to Venezuela.

Internally, beyond the representation of Cargill as a structural power of the United States, as revealed in the document “Venezuela in the geopolitics of food,” Cargill is a transnational company for the purchase, sale, processing and distribution of grains and crops, that began its operations in Venezuela in 1986 through a strategic association with Mimesa CA, acquiring all the shares of the Venezuelan company in 1990 and appropriating the Mimesa brand.

From the time of its establishment in Venezuela until 2006, it was consolidated with the purchase of Pastificio Universal (1988) and Pillsbury (1989) and it was incorporated into the refined oils and fats business with the purchase of La Torre del Oro (1990) and the Mavesa oil plants (1993), through asset transactions.

It entered the rice business with the acquisition of the Santa Ana rice production plant (1994). This company was expropriated in 2009 for failure to comply with the prices established for basic food-related products.

In 1998, with the acquisition of Gramoven (Grandes Molinos de Venezuela, a subsidiary of Bunge y Born), it became the largest producer of flour and pasta in the country.

One of Cargill’s latest acquisitions in Venezuela, in relation to food, was Molinos de Trigo (Molinarca) of Alfonzo Rivas & Cía, in 2006.

With all the acquisitions made since its establishment in 1986, Cargill came to control several of the most consumed Venezuelan brands, directly proportional to its configuration as a transnational company that, through associations, managed to expand its influence and came to totally or partially control marketing policy.

Through these transactions Cargill came to control 51% of the pasta business in Venezuela, absorbing Gramoven and other companies, and controlling 38% of cooking oil, generating a market concentration.

The construction of an oligopolistic cartel in this case is clearly evidenced by citing just a few examples. Through the “asset exchange alliance” with Mavesa, the transnational obtained the line of industrial oils, as well as its edible oil brands (among which was the reputable Vatel brand).

For its part, Cargill transferred to Mavesa the line of products called La Torre del Oro (which belonged to Laurak and had previously been acquired by Cargill) with the commitment to supply raw materials to Mavesa. The same commitment that the transnational assumed with Alfonzo Rivas & Cía in 2006, when it acquired Molinos de Trigo, in which Cargill became a supplier of flour for the company.

That is, the transnational company, linked to the cartelized and oligopolized national business community, copied the lines of wheat flour (bakery, pastries and pasta), cooking oil and rice, which are three of the most important foods in the Venezuelan national diet. And like other transnationals, it fueled the cycle of oligopolization and transnationalization of the food industry in the country.

In addition, it became the main producer of salt in Venezuela for human, animal and industrial consumption (oil, chemical and petrochemical), since its collaboration with Pequiven in 1995 for the creation of PRODUSAL, a sector that Cargill also controls worldwide.

In 2001, it entered the pet food business with the acquisition of Agribrands International Inc.—owned by Ralston Purina, a transnational company that spun off the international business that year—renaming itself Agribands Cargill and becoming one of the largest companies in the world in animal nutrition. In addition Cargill owns the license for the Purina and Chow brands, which it shares with Nestlé, after Ralston Purina merged with the subsidiary Friskies Nestlé PetCare Company, finally called Nestlé Purina PetCare Company.

In summary, Cargill has controlled a part of the food supply of Venezuela’s basic national diet (wheat, pasta and oil), an element of considerable importance within the Venezuelan oil rentier model, representing the always privileged import of raw materials, generally from its parent company, for the subsequent repatriation of dividends, whose currencies also belong to their original country.

For this reason, Venezuela for Cargill is only one of the main destinations for the export of its raw material for processing or export of products manufactured at its headquarters in the United States, Brazil or Argentina, particularly wheat, its main business in Venezuela.

CARGILL’S DELAY IN LEAVING THE COUNTRY
The truth is that Cargill’s decision had been slow to carry out, especially since March 2019, when David MacLennan, president and CEO of the corporation, announced that the company expected to remain in Venezuela —although it was the only country “without positive expectations ” after Washington’s economic sanctions—perhaps awaiting the establishment of the fake (Guaido’s) government under the auspices of the United States.

As a consequence, at the beginning of 2020 the Foreign Agricultural Service (FAS) and the Department of Agriculture (USDA), taking into consideration that Venezuela depends entirely on imported wheat, already anticipated the decrease in consumption to 775,000 metric tons and, therefore, the fall in imports, for which they projected the need to stimulate new markets in other countries.

In addition, it’s recognized that the impact of sanctions affects consumption patterns and, at the same time, the geopolitical environment is generating a situation where new trading partners such as Russia, China and Turkey are replacing the traditional suppliers of processed products and foods. Among these is Cargill, which for its production of wheat, pasta and oils requires exclusive importation.

Now, with this action, it could lead us to conclude that the economic, financial and commercial siege has pushed Venezuela’s food industry to orbit outside of the control of the United States and its transnational companies.

On the other hand, perhaps the boycott of wheat imports from Russia—predicted by domestic millers, including Cargill and other transnational companies, or pressure for the private sector to control food imports, such as wheat, corn or rice—was seen as an opportunity of the blockade for the benefit of US agro-exporters or Cargill. This strategy so far has not been effective.

However, although Cargill will not continue in the future in Venezuela, this transnational and its main competitors Archer Daniels Midland (ADM), Bunge and Dreyfus, are the big four known as the “ABCD” of agribusiness that dominates the global commercialization of raw agricultural materials, and from which it is difficult to escape.

It should also be noted that Cargill’s long-term strategy is to move from a low-margin commodity trading and processing business to a higher-margin company, including conducting research and development of next-generation biofuels. In fact, it produces ethanol and biodiesel in the United States and the European Union, ethanol in Brazil, and biodiesel in Argentina.

So much so that while communicating the sale of assets in Venezuela, Cargill announced the construction of a biodiesel plant in Belgium that it estimates will help satisfy the demand for renewable energy to allow it to keep its leadership position throughout Europe in production of renewable fuels, and in which factory all types of used cooking oils and fats can be processed, including by-products of food processing and waste from the food industry.

FINAL THOUGHTS
Finally, the aforementioned communication from Cargill should also be given a political reading. Cargill’s decision to sell out just one month before the parliamentary elections in Venezuela is reminiscent of Kellogg’s 2018 decision five days before the presidential elections, following which the Venezuelan government, through Official Gazette No. 41404, took immediate occupation of the company and formed a Special Administrative Board, which has kept the company operating up to now. Obviously, Cargill won’t risk that.

On the other hand, it is important to note that one of the companies that make up the transnational and national oligopoly present in the Venezuelan agri-food system is withdrawing from the country, with a dominant position in the marketing of the country’s most-consumed foods including corn and wheat flour, pasta, fats, oils, rice and oats.

Nor can it be overlooked that the possible departure of Cargill from Venezuela may constitute an opportune contribution to the breaking of the cycle of oligopolization and transnationalization of the Venezuelan national food industry in times of blockade.

This action by Cargill is also driven by the economic, financial and commercial blockade imposed by the United States, its country of origin, against Venezuela, to advance in the implementation of its policy that allows them to achieve their desired “regime change.”

Featured image: Cargill is one of the largest global agricultural oligopolies (Photo: Archive).