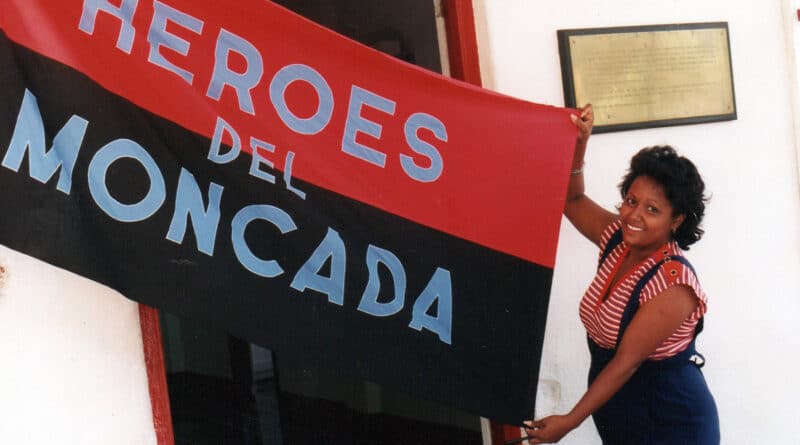 Today Cuba celebrates the 67th anniversary of the assault on the Moncada and Carlos Manuel de Céspedes barracks that mark the beginning of the Cuban Revolution. From this beginning, Cuba’s altruistic view of making the world safer and healthier began.

It has developed into a society that gives everything it has without expecting credit. There are hundreds of examples of this like what took place in 1986, after the nuclear catastrophe of Chernobyl, when blockaded Cuba took in over 20,000 young cancer victims and their family members from 1989 to 2011 providing medical care, schooling, clothing, food, accommodation, playgrounds – all free of charge.

Another story worth remembering is one of forgiveness in 2007 when Mario Terán, the Bolivian sergeant who murdered Che Guevara on October 9, 1967, was operated on for free by Cuban doctors who restored his vision in a hospital donated by the Cuban government to Bolivia and inaugurated by President Evo Morales in the city of Santa Cruz de la Sierra.

And now Cuba is on the world stage in the midst of this dangerous global Pandemic and Cuba is continuing to save lives, while the US government and its media instead of being constructive in the battle have intensified the campaign to discredit Cuba’s collaboration. The misinformation is not surprising from a country whose president’s main vocation is preaching an endless stream of lies.

Even Trump’s faithful followers must be starting to see that there is a contradiction in how the richest country in the world has not been able to put any brake on the virus, is accumulating the highest number of infections and deaths, with no end in sight, while attacking Cuba, a nation that not only has been able to control the pandemic but has extended their full solidarity to other nations.

Why the Trump administration puts priority on discrediting Cuba’s international missions abroad that save lives instead of focusing on the social and human cost in the US is mindboggling and criminal. Trump, his anti-Cuba friends in Florida, and the mainstream media are mixing up a concoction of ignorance with malicious intention, never mentioning that Cuba has flattened the curve of the virus and has had only one death in three weeks.

All the empty words we hear about the Cuban Medical Brigades going to other countries being forced labor is not only without proof but fails to explain why there are many more medical professionals volunteer to go than openings. Furthermore, the White House, the State Department, and the media fail to mention one word about the 60-year-old US blockade and its impact against the island that causes unnecessary suffering for the Cuban people. As we have become accustomed, the Trump Administration likes to throw things at the wall to see what sticks.

A few days ago, Kenneth Roth, the executive director of Human Rights Watch, an organization with a long history of parroting the official line of the US, jumped on the bandwagon with a twit, “Cuban doctors deployed abroad offer valuable service but at the expense of their freedoms”. At least Mr. Roth admitted that Cuban doctors offered valuable services but Roth offered no proof about what he meant. He continues, “They can be disciplined for being friends w/ people who hold hostile or contrary views to the Cuban revolution and face prosecution if they “abandon” their jobs. This is the Executive Director of an international so-called human rights organization talking with no examples.

Cuba with a little more than 11 million people has more than 95,000 doctors, 9 for every 1,000 inhabitants, and more than 85,000 nurses that are part of the 492,000 Cuban health professionals according to the latest Statistical Yearbook at the beginning of 2019.

According to the Pan American Health Organization (PAHO), the first brigade of Cuba health professionals to provide services abroad was in Algeria in 1963. Since then, more than 400,000 professionals have served in 164 countries in Latin America and the Caribbean, Africa, the Middle East, Asia, and even Portugal.

These services are popularly known as “medical missions,” include sending health professionals to countries that officially request them from the Cuban government. And those who go do so voluntarily because they are part of a society that puts human lives at the center. They leave their families behind for a just cause but they also know that the Cuban government will take care of them.

Despite the slander, Cuba continues to extend its solidarity with great pride. Currently, there are three thousand members of the Henry Reeve medical brigades (designed to fight pandemics and natural disasters) who are on the front lines of the pandemic in 37 countries with 43 brigades.

But the attacks never quit, on May 8, 2020, the U.S. Agency for International Development (USAID) added another $2 million to undermine the work of the brigades and a month later, head Cuba hater Marco Rubio joined other Republican Senators and presented a bill to “punish” countries that sign agreements with the Cuban government to receive this support. Rubio’s credibility has been suspect ever since he was caught in his own lies by claiming his parents ‘came to America following Fidel Castro’s takeover’ of Cuba when in fact they came to the US in 1956, three years before the revolution during the repression of the US-backed Batista regime.

One would think that government officials in Florida like Rubio would be focused on containing COVID-19 in their state that has become an epicenter of infection rates and deaths instead of being fixated on tarnishing the success that Cuba is having in beating back the pandemic.

Some of the medical personnel are now returning to Cuba from their missions and have been telling their experiences in their own words to the people through video conferencing, welcomed by President Miguel Diaz Canel.

Dr. Edelsy Delgado, an Intensive Care specialist from the Gustavo Aldereguía Hospital in Cienfuegos, kept a journal during the three months he spent in Andorra. He said upon his return “Believe me, we represented Cuba at the highest level.”

Leidisbet Lopez Cantero, a nurse from Camaguey, was the flag-bearer who couldn’t hold back her tears when she got off the airplane that brought her to Havana and saw her mother and son speaking of her in the welcoming video.

Dr Michael Cabrera Laza, head of the group of five distinguished consultants in Nicaragua, was deeply moved as he spoke of traveling through all 17 regions of Nicaragua, and finding in absolutely all of them the marks left by some Cuban doctor or teacher or the presence of some community leader trained in Cuba. “And in every action that we carried out, Fidel was there.”

Nurses Francisco Gonzalez Prada of Sancti Spiritus, Liliana Martinez of Holguin, and Aldo Moreira of Camaguey, who were all part of the Antigua and Barbuda brigade testified about their own feelings when they saw the positive changes in how their patients felt when they found out they were being cared for by Cubans. “I didn’t make a mistake; I am right where I should be.”

Cuba is right where they should be without hesitation.