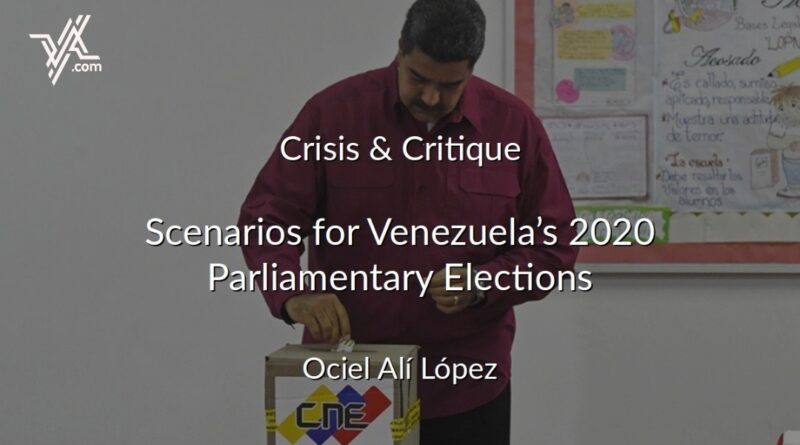 Will legislative elections provide an off-ramp to Venezuela’s political standoff or will high abstention and escalating US aggression deepen the crisis, asks Ociel López.

A number of events have taken place in recent weeks which appear to open the way for a path out of the current political crisis and towards new conditions of stability in the country.

The roadmap has several democratic and electoral elements, which dovetail with decrees handed down by state institutions.

The government’s strategy is, in broad strokes, to create a new democratic framework on the basis of several recent developments that we will examine.

While this roadmap is rife with constitutional inconsistencies and arbitrary maneuvers, it is the only viable political solution in the current context of economic crisis and US-led international siege. It also paves the way for a presidential recall referendum in 2022, which President Nicolas Maduro has recognized as an option. The perpetuation of Juan Guaido’s “interim presidency” now belongs to the realm of fantasy, not real politics.

This strategy depends on two factors. First, that Washington, under a Trump or Biden administration, scale down its aggression against Venezuela and refrain from interfering in the democratic process, as the US has done in the past, including going to the extremes of sanctioning opposition politicians who dialogue with the government.

Second and most important, the popular majorities must return to voting as the only possible way to disarm the minefield that contemporary Venezuela has become.

Between cooptation and an electoral solution

In recent weeks, Venezuela has seen a number of crucial political developments.

With three separate rulings in June and July, the Supreme Court (TSJ) intervened in the executive committees of opposition parties Democratic Action (AD), Justice First (PJ), and Popular Will (VP), naming new leaders drawn from sectors that have entered negotiations, more or less openly, with the national government.

The TSJ also named a new National Electoral Council (CNE) on June 12 after the opposition-controlled National Assembly failed to fulfill its constitutional mandate to do so. A group of minority opposition parties which have been in talks with the government since September 2019 filed a motion for the high court to intervene in order to guarantee legislative elections this year. The new CNE includes both government and opposition representatives, who have taken all decisions in concert so far, including the announcement of parliamentary elections for December 6.

On June 24, Maduro signaled the possibility of a presidential recall referendum in 2022, invoking a constitutional mechanism, which can be activated for any elected post in the country. While the announcement has not raised major expectations, above all because a referendum was blocked in 2016 by the previous CNE’s foot-dragging and by internal opposition divisions, this is the first time that such a scenario has been openly presented by the government.

The first possibility is a process of democratic re-opening involving all actors, including the government and Chavismo, but also the opposition, such that the crisis can be resolved through democratic and constitutional channels within a new framework of coexistence.

A referendum could blow a second wind into Maduro’s sails for his final years in office and/or it could rejuvenate Chavismo such that, were it to lose the vote, it could in the space of a month present a new candidate in the face of a divided opposition.

The second scenario is the consolidation of the ruling United Socialist Party (PSUV) as the unchallenged political force in the country, winning on the back of high abstention the majority of National Assembly seats in December.

Basically there are two decisive factors in determining whether things go one way or the other: the level of abstention, which reflects the credibility of Maduro’s political strategy, and the role of Washington. If the US continues to escalate economic sanctions and measures aimed at criminalizing the Chavista leadership, the government will have no other recourse than to dig in, refusing to allow any electoral process that it could lose and risk reprisals upon leaving office. But if sanctions are lifted and international actors provide necessary guarantees to the government and opposition, the possibility for resolving the crisis through existing democratic mechanisms could open.

The above series of measures and institutional decisions have not been met with a decisive response on the part of the most important opposition actors. This is due not only to the demobilization brought about by the pandemic, but also reflects the opposition’s political exhaustion borne of a long sequence of defeats, from the April 30, 2019 failed military putsch , in which many prominent opposition leaders publicly participated, to last May’s thwarted paramilitary incursion , known as “Operation Gedeon.” The opposition’s radical factions squandered all of their political capital on Guaido’s “interim presidency,” which eighteen months later has little to show for itself. The more moderate parties, for their part, mostly bowed to the hardline regime change policy being crafted in Washington and Miami.

But another opposition is possible.

In parallel to all of this, the government has been negotiating with minoritarian opposition parties as part of the National Dialogue Roundtable, and now they are co-participants in this new political strategy, with representation in the CNE. Joining them are the traditional opposition parties with new leadership. The TSJ has displaced the opposition’s historic leadership and we still do not know what the consequences will be.

With this legal-institutional framework and all the parties on the ballot, there is just one variable that must wait until election day: will the members of those parties be emboldened by the new conditions and decide to vote en masse, or on the contrary, will they boycott?

This is the key for determining the success or failure of the government’s strategy, because high abstention will frustrate this plan aimed at pulling the country out of the crisis.

As was to be expected, the opposition leadership has rejected the government’s measures and has ruled out taking part in December’s elections.

The high abstention in Maduro’s 2018 reelection (54 percent) opened the way for Guaido’s “interim presidency” and violent effort to force a political transition. A similarly high abstention on December 6 could place not only the ruling PSUV but even the whole political system in jeopardy.

But those who champion abstentionism will also have to recall what happened in 2005 when the opposition called for a boycott and left the legislature exclusively in the hands of Chavismo, which ended up taking over all of the institutions and was tremendously strengthened. Different opposition spokespeople have critically reflected on that decision over time. However, by all indications, the opposition is set on repeating the same blunder.

In a bid to persuade them, Maduro has broached the possibility of a recall referendum for 2022. Can the new opposition reach that point or will shipwreck along the way? Only December will tell.

The opposition masses could adhere to the call for boycott and allow the PSUV to win an overwhelming majority in the only institution it does not currently control: the National Assembly. That is the most probable outcome.

The alternative is that opposition sectors that have decided to participate, using the argument of a possible recall referendum in 2022, could motivate the opposition bases to reject their historic leaders’ call for abstention and come out to vote massively, splitting the parliament with the PSUV and blocking the ruling party from having total control.

At the same time, the radical sectors will insist on overthrowing Maduro as the sine qua non for participation in the political sphere. High abstention will mean that the hardline opposition will maintain its hegemony and continue down the path of violence, pushing for harsher sanctions and even new military adventures.

Another factor to keep in mind is the political impact of the COVID-19 pandemic, which is expanding in Venezuela and will likely not be under control in December. The logical outcome is an increase in abstention. However, the virus could also serve the government as a perfect scapegoat for high abstention. What is clear is that the December elections are confirmed and by every indication, with adequate sanitary measures, they will take place.