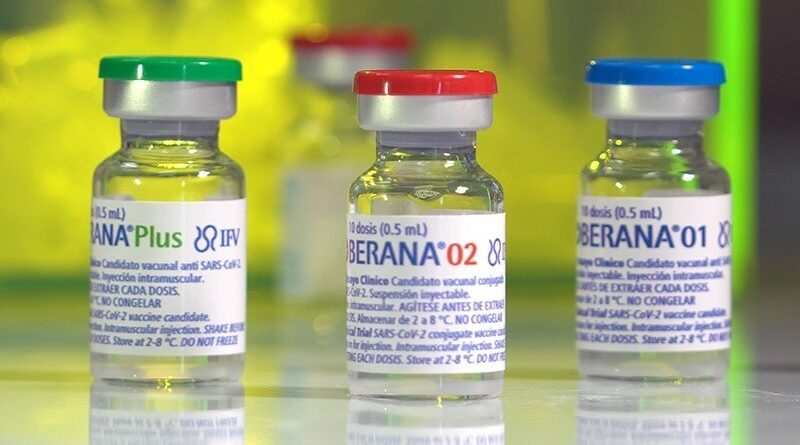 With its development of five COVID-19 vaccines and the promise of sharing know-how with developing countries, Cuba has remained faithful to Che Guevara’s values of international solidarity and people-oriented medicine

Cuba’s emergency rollout of two homegrown vaccines last month has awed the world. For a developing country the size of the US State of Tennessee, it is quite a feat. The achievement is all the more significant when we consider the enormous difficulties caused by the US blockade which restricts access to high-technology equipment, state-of-the-art technologies and good-quality raw materials and reagents. Even when they are available, they are expensive. Cuba’s success in producing COVID-19 vaccines not only reiterates its scientific prowess but is also a testimony to its political approach to health — keeping it people-centric, ensuring mass scaling up and distribution, and using collaborative, rather than competitive, research methods.

Cuba has four vaccines and one booster shot in different clinical trial stages. Of those, Abdala has finished phase-3 clinical trials, and the trials for Soberana 02 should conclude by this month. Both trials enrolled nearly 45,000 volunteers. The placebo arm was kept small due to the pandemic situation, and those volunteers are now also being vaccinated. The vaccines are expected to get full regulatory approval in the next couple of months.

Rapid advancements in vaccine R&D
As cases started to rise steeply in late January, Cuba needed to urgently roll out vaccines. Interventional clinical trials started among health workers and biotechnology staff. After analyzing the phase-2 trial data of Abdala and Soberana 02 and establishing their safety for human use, the World Health Organization (WHO) allowed public health intervention on a higher scale. Cuba started the vaccine rollout in May, and within a month, had vaccinated almost 3.5 million people – nearly 15% of its population.

The other two vaccine candidates — Soberana 01 and Mambisa — are in the initial phases of clinical trials and are seen as promising by their developers. The booster shot — Soberana Plus is for people who have recovered from COVID-19. It may also be given to people who need a booster after two shots of Soberana 02. It has reached phase-2 clinical trials. Of note is that Mambisa is an intranasal vaccine: it is easy to administer and hence useful in resource-poor settings.

Cuba achieved all of this within 18 months of the start of the pandemic. The research has been carried out by public institutes which collaborate with scientists from institutes in other countries, such as Prof. Fabrizio Chiodo of Institute of Biomolecular Chemistry, National Research Council (CNR) in Italy.

RELATED CONTENT: An Interview With Silvio Rodríguez on his Music, Life & his Support for the Campaign to Award Cuban Doctors the Nobel Peace Prize

But in addition to the promise that safe and effective vaccines will reach all Cubans by the end of year if everything goes as planned, the country has sent out much deeper messages. One, that science develops best when it is shared and not monopolized. And two, that scientific discoveries made in the Global South are best suited to respond to the needs of these countries.

Sharing at the heart of the Cuban research model
“Cuba has historically followed the model of sharing technology and know-how for its scientific research. The same can be seen in the case of COVID-19 vaccines,” said Luis Gil Abinader, Senior Researcher, Knowledge Ecology International, US. The research for COVID-19 vaccines in Cuba has been conducted in two institutes. The three Soberana versions were developed in Finlay Institute of Vaccines (IFV) while Abdala and Mambisa were developed in Center for Genetic Engineering and Biotechnology (CIGB). Both are government entities.

“The scientists of both institutes have been in close communication from the beginning. They meet once a week to share information about successes, challenges and failures. These meetings were facilitated by BioCubaFarma, which was established in 2012 to oversee implementation of research and development policy for drugs and other products,” said Abinader, who has been closely following the development of vaccine candidates. He pointed out the benefits of collaborative research.

“Working alone, you find challenges and take time to solve. When you collaborate, you find the solutions quicker. It is a way of fine-tuning the research. The final output takes less time,” said Abinader. He added that collaborative research consumes less money, which may be reflected in pricing of the final product.

A clearer picture of these advantages emerges when we look at the vaccine development model being followed in the US, a country merely 90 nautical miles from Cuba. The US spends ten times more on health per capita than Cuba (US$ 10,624 and US$ 987 respectively in 2018, according to WHO data) and yet has worse health indicators.

“Often two separate entities researching in the same field, do not talk to each other, especially in the private sector. They work as competitors and maintain secrecy around their work. This makes the research more expensive and time-consuming,” Abinader said.

In the end, these models have drastically different impacts. Products arising out of a competitive R&D model are the monopoly of a company, manufactured for the sake of profit. Thus, the company does its best to not share technology and know-how, and maintains patent protection for the longest possible period. Such secrecy and monopoly allows companies to charge exorbitant prices for medical products, even when the production cost is low.

The know-how of collaborative research model, on the other hand, is shared among many people, scientists and institutes and hence is antithetical to monopoly rights. It is usually led by public investment. Hence, the motive of R&D and scientific discovery is public health, not profit. Historically, in the true spirit of internationalism, Cuba has shared its vaccine technology with other countries, including a number of developing nations.

Developing vaccines and medicines for the Global South
A 2015 report by WHO and European Commission hailed the Cuban model with the following words, “Cuba has become a global leader in the South-South transfer of technology, helping low-income countries develop their own domestic biotech capabilities, providing technical training, and facilitating access to low-cost lifesaving drugs to combat diseases such as meningitis B and hepatitis B.” It has transferred technology to countries like Algeria, South Africa, India, Vietnam, Malaysia, Brazil, Mexico and Argentina. For the COVID-19 vaccines, it is working closely with the other two victims of the US blockade — Venezuela and Iran – where phase-3 clinical trials for Soberana 02 are underway. There is a high probability that these countries will be able to produce the vaccine locally.

Other Caribbean and Latin American countries have also shown interest in working with Cuba on vaccine research and development. According to the Caribbean Council, Argentina and Cuba signed a Letter of Intent in early June and it is expected that the two countries will collaborate in the production of Cuban vaccines developed against COVID-19. The letter specifies that the collaboration relates to ‘the immunization of the population of Cuba and Argentina, as well as of the countries of Latin America and the Caribbean.’

The Cuban vaccines have other scientific advantages useful for developing countries. They are using the technology of the protein subunit. Vaccines using this technology can be stored at a temperature range of 2-8 degree C, while remaining stable at room temperature. Most countries of the Global South are located in hot climates, so easy storage is of crucial importance.

“Cuba is a Caribbean country. They have been doing vaccines for a long time and they do it for their climate and temperature. This technology is more suitable for their needs,” said Abinader.

As opposed to this, US companies such as Pfizer and Moderna have used mRNA technology. Vaccines developed this way have to be stored at a very low temperature. The technology itself is expensive as it uses a lot of ingredients. These companies also follow a strategy of diversifying the production system, making it difficult for low and middle income countries to obtain all the materials for local manufacture.

Another important point is that Soberana 02 is a conjugate vaccine, the only one among 102 vaccine candidates in WHO’s COVID-19 Vaccine Tracker and Landscape. This technology is known to be safe for children. Taking this forward, beginning on June 14, Cuba started two clinical trials among children — one in the age group  of 3-11 years, and another among 12-18 year-olds. Finding volunteers for clinical trials is never an issue in Cuba, even among children. Parents trust the public system and do not hesitate to take part.

A March 2021 paper in bioRxiv, a pre-print journal, outlined another advantage of protein subunit products – it is an old technology, widely used for producing other vaccines. COVID-19 vaccines can use the already “existing vaccine production capacities available in several countries,” enabling cost-effective mass scale up, the paper points out.

According to the WHO’s Vaccine Tracker, vaccines using the protein subunit technology constitute 31% of 102 vaccine candidates in various clinical stages. However, only six have reached the phase-3 stage, including the two from Cuba. If approved, Cuba’s vaccines may well be the first to have been developed using this technology, leading the way for large scale production in a relatively simple, rapid, and scalable manner. All of these factors are key to vaccinating the whole world quickly.

Since the Cuban revolution of 1959, health care has been among the six priority strategic areas. Instead of succumbing to the pressure of the US embargo introduced in 1962, Cuba focused on developing biotechnology and using it to build south-south solidarity. Cuba’s public-led model of scientific development might well end up being a key contribution to the way out of the pandemic, not only for its own people but also for those in low and middle income countries too.

Featured image: The Soberana 01 and Soberana 02 vaccines and the Soberana Plus Booster shot have been developed by the Finlay Institute of Vaccines. Photo: Mixael Porto Chiong, Javier Martínez Acosta, La Pupila Asombrada