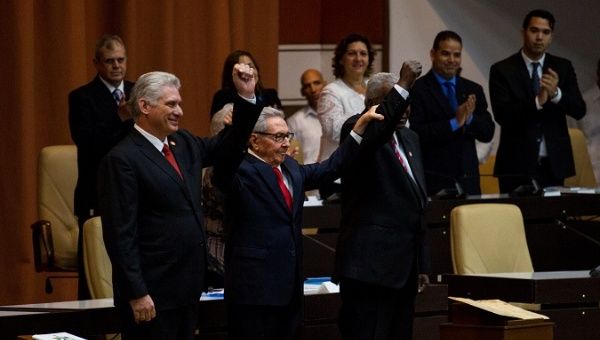 Cuban President Diaz-Canel said the U.S. under Donald Trump is successfully destroying the fragile relationship between the two countries.

Cuban President Miguel Diaz-Canel accused the United States President Donald Trump’s administration Saturday of dragging relations with the United States to their worst level in decades and called on Cubans to strengthen the country’s defenses and economy.

Diaz-Canel, in a speech closing the National Assembly, said the U.S. is engaging in an “asphyxiating financial persecution that makes the import of goods and resources of primary necessity particularly difficult.”

He added that such U.S. hostility towards his country has “pushed the precarious relations with our country back to the worst level by fabricating false acoustic incidents, channeling millions of dollars to the counterrevolution and political subversion, putting together false and deceptive lists.”

An increase in sanctions by the U.S. under President Trump aims at destroying Cuba’s economy.

Cuba’s Economy Minister Alejandro Gil Fernandez earlier in the day called on the government to tighten belts further and seek alternatives to imports, as foreign exchange earnings decline and credit for supplies and investment become more difficult to find.

“Exports are not growing as planned. The levels of foreign investment that the economy demands are not materializing,” Gil said. “We can forecast the import plan will not be fulfilled because the credits we need cannot be finalized due to the arrears of payments of debts.”

The Trump administration has complained that Cuba is responsible for the survival of socialist Venezuelan President Nicholas Maduro and slapped new sanctions on Cuba, which has been under a crippling trade blockade since the 1970s.

“Our response is no, imperialist gentlemen, we Cubans do not surrender,” Diaz-Canel said Saturday, adding the situation meant “we have two absolute priorities: the preparation of our defense and the economic battle at the same time.”

Venezuela, Nicaragua, and Cuba are the only nations in Latin America that “threaten the powerful empire,” Diaz-Canel said referring to the leftist governments in those nations.

“The current U.S. administration, which despises multilateralism and has decided to return the world to its worst times, using the most impudent threats, with insolent interference and constant ultimatums , including the possibility of invasions, has publicly declared, more than once, its purpose of destroying any development which is different from the savage capitalism that tries to develop in the region,” said the president explaining why Trump targets Cuba, Venezuela, and Nicaragua.