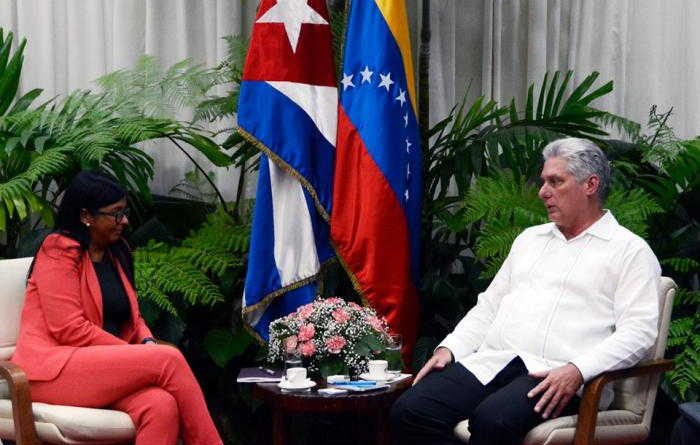 During the meeting, both officials spoke about Cuba-Venezuela friendly relationships.

Both leaders exchanged information about the progress of economic and cultural relations between Cuba and Venezuela, and other topics of interest.

RELATED CONTENT: Bruno Rodriguez Speech at the UN: “Economic Aggression, Threats and Blackmail will not Take Away a Single Concession”

Delcy Rodriguez denounced the unjust blockade unilaterally imposed by the United States, assuring that, this or any other sanction, will be able to put an end to the Cuban Revolution.

The Venezuelan vice-president also remarked that the United States has applied more than 350 coercive measures against her country in the last four years, and insisted that Washington’s objective is “the illicit appropriation of all our resources abroad”.

RELATED CONTENT: Delcy Rodriguez at the UN: Venezuela is Decent and Indivisible

On his side, Cuban President Miguel Diaz-Canel, reiterated Cuba’s supporting role towards the government and people of Venezuela.

Both representatives spoke as well, about the recent celebration of the 74th ordinary session of the UN General Assembly.

During her speech at the United Nations, the Venezuelan official denounced the impartial character of corporate media who has reported very few things about Venezuela’s social protection system, which includes all Venezuelans, and has been omitted by the United States in its eagerness to destroy the Bolivarian government project.