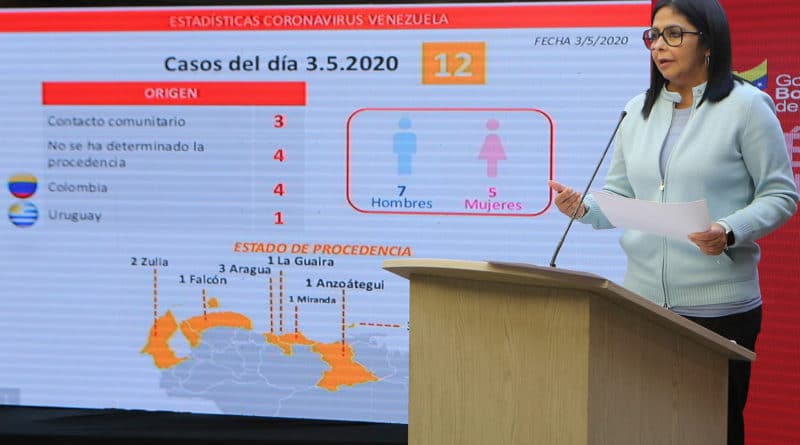 In the last 24 hours, 12 new cases of Covid-19 have been detected in Venezuela, for a total of 357 infections, reported the Executive Vice President, Delcy Rodríguez. She explained that of the total new cases, 2 were detected in the state of Zulia, 1 in Falcón, 3 in Aragua, 1 in La Guaira, 1 in Miranda, 1 in Anzoátegui and 3 in Nueva Esparta, with the latter locality registering the highest number of infections.

Likewise, she detailed that 112 patients are asymptomatic and represent a higher risk of contagion, so she insisted on the need to keep and respect social distancing measures, such as the use of face masks.

The figure of 10 deceased remains and a 44.3% recovery is reported. The vice president pointed out that Venezuela has carried out 482,953 tests, which represents 16,098 tests per million inhabitants, placing our country at the forefront of testing on the continent.

She added that the Venezuelan health authorities are applying all the epidemiological protocols recommended by the World Health Organization (WHO) to migrants returning to the country.

Therefore, when a person enters the territory, a rapid screening test is done. In the case of Táchira, the compatriots remain fourteen days in a health center and before continuing the trip to their destination state, they undergo another test. Upon arrival at destination, a new screening should be performed. Cases detected in the last 24 hours
She reported that to date, 25,861 Venezuelans have returned, mainly from Colombia, detecting 18 cases of coronavirus with the PCR test.

The Venezuelan vice president also referred to the failed US led mercenary attack on the coast of La Guaira and informed Venezuelans that the Ambassador of Netherlands was called to demand explanations on the use of the Aruba island for logistic assistance by the terrorists.