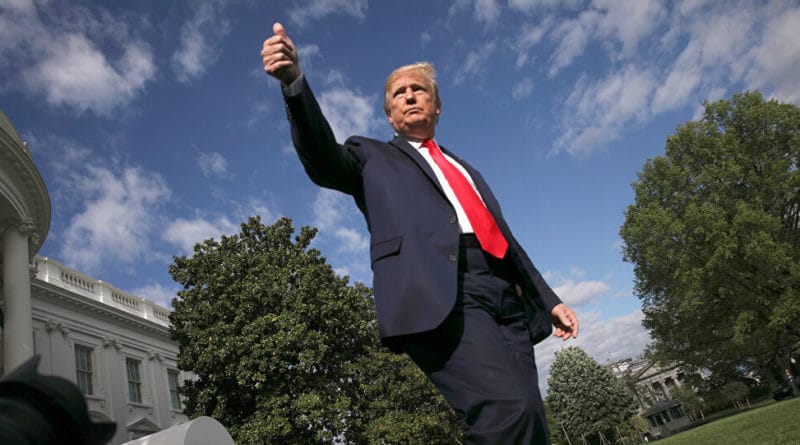 International News
May 4, 2020May 4, 2020 orinocotribune looting China's gold, US decline, us financial default, US Imperialism

The idea of punishing China for the coronavirus by expropriating around a trillion dollars of the Asian country’s gold and currency reserves has reached the highest positions of American power.

This approach is already being discussed at the White House, reports The Washington Post. Citing sources from the Trump Administration, the newspaper writes that the issue of forgiving itself all debts to Beijing is considered part of a strategy to compel China to pay financial compensation for the damage caused by the coronavirus.

“Unauthorized debt forgiveness in this case can be presented to the American public as a kind of prepayment of this compensation: Beijing thought it had given Washington a loan, but in reality it turned out that it had only compensated in advance for the damages caused because of the pandemic,” writes Sputnik columnist Ivan Danilov.

Here, President Trump seems to be in a moderate position: he wants to financially punish China for the epidemic, but due to some business experience, he is against too risky decisions that could jeopardize the situation of US currency, the analyst continues.

The Washington Post also reveals that Trump and his aides have already privately discussed the issue of limiting China’s sovereign immunity – a judicial doctrine that prevents a state from being sued without its consent – so the government or victims of the epidemic in the US can sue Beijing for damages.

Some administration officials have also spoken on the issue of cancelling part of the US debt to China, but it is not known whether the president supported this idea.

In turn, the president himself expressed concern about the “sanctity of the dollar”, hinting that a selective default by the US in paying its debts could undermine its use as the world’s main currency. But he immediately consoled journalists by stating that he would certainly find a way to punish China. Mentioning another idea: introducing extraordinarily high tariffs on Chinese products to obtain this trillion dollars that he considers his.

“This is probably the sum in which the American leader estimates the damage caused to the economy and his own ‘rating’ by the actions or inaction of Beijing during the epidemic,” summarizes Danílov.

The Russian believes that “stealing” billions of dollars from the People’s Republic of China by canceling the US bonds it holds is not only economic but also political. It would allow the president to raise his rating ahead of the elections by making a nice gesture, such as distributing this money among those who suffered losses in the shale oil sector.

The destruction of about a third of China’s gold and currency reserves is severe punishment. In fact, the first reaction to information about a possible default on the debt with China was a weakening of the yuan. If this forced debt cancellation really does take place, the pressure on the Chinese currency will be much worse, says Danilov.

Nor will it be good news for the US currency, whose stability may drop dramatically. However, according to the expert, Trump is perfectly capable of “sacrificing the status of the dollar for his reelection.”

Another idea that the White House may consider is that if the Federal Reserve is already buying US bonds in the market, there is no need for external creditors at all: the printing press is going to save the budget, it is going to pay the national debt and it is going to guarantee the dollar.

With all that, The Washington Post reports that “China’s punishment is definitely what the president is inclined to do, according to one of his advisers.”