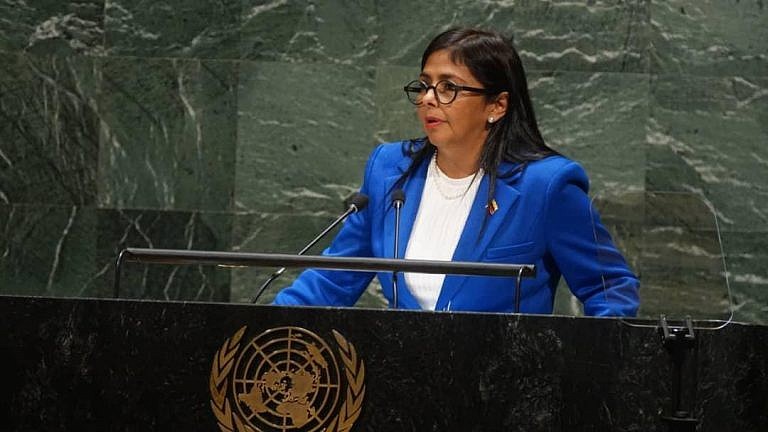 This Friday the vice president of Venezuela, Delcy Rodríguez, spoke at the United Nations (UN) denouncing the United States for “exercising a new type of terrorism that uses banks instead of bombs.” During her speech at the debate of the 74th session of the UN General Assembly, the Venezuelan official said that the government of the current US president, Donald Trump, has a record of having launched 4,096 bombs “that have caused the suffering of entire populations”, an estimated 121 bombs per day.

However, she said that there is a new type “State terrorism that is imposed on the people and no longer uses bombs, but banks and insurance companies that are within reach of a keyboard key in the digital era.”

He explained that “these are precisely the measures imposed by the US, using the dominance of the dollar as a world reserve currency.”

In this framework, the Treasury Department, which she called “the economic Pentagon”, is the one that “militarizes international relations and punishes millions of innocent people to apply doctrines of regime change and steal, blatantly, the resources of nations.”

The experiment with Venezuela
An example of this new form of “terrorism” is the sanctions that the US has applied against Caracas, which have intensified during Trump’s presidency. “Between 2015 and 2019, the US government has decreed more than 350 unilateral coercive measures against the Bolivarian Republic of Venezuela,” she said.

She pointed out that these US measures include the “unlawful and improper appropriation” of the country’s resources and assets abroad, as well as “total financial and commercial blockade, impact on health, education, food.” She said that these sanctions are “aimed at suffocating the Venezuelan economy” and “subjugating” that people. With that, she said, Washington has used Venezuela as a “perverse experiment against multilateralism” to exercise “economic terrorism.” She said that the sanctions have caused the South American country “the decrease in income of more than nine times” and it is estimated that between 2015 and 2018, the losses for the economy of the South American country reached 130,000 million dollars.

“They are the preferred weapon of domination in the 21st century, less cost and greater neocolonial profitability,” she said, and pointed out that currently 32 countries suffer the economic aggressions of the US Government and, according to a figure she quoted from the UN, “one third of humanity suffers the consequences of these collective punishments.”

“These measures constitute the use of force prohibited by the Charter of the United Nations and international law, which undermines peace, security and massively violates human rights,” she emphasized. Faced with this reality, Rodríguez asked the UN to investigate “all the infamous violations” of the UN’s Charter committed by the United States, which constitute “crimes against humanity”.

TIAR Put En Marche
The Venezuelan vice president also mentioned the implementation of the Inter-American Treaty of Reciprocal Assistance (TIAR) in the Organization of American States (OAS) against Venezuela, a mechanism from which, she recalled, Caracas withdrew some years ago.

The measure has been proposed by the US and received the support of several countries in the region, allied to Washington.

In this regard, Rodriguez said that “approving the TIAR seeks to plant the pillars for an armed intervention in Venezuela.” She recalled that until now there have been attempts of coup d’etat in the South American country to seek a change of government, but they have been “defeated” by local authorities. She also listed assassination attempts against the president, Nicolás Maduro, and attempts to assassinate “all political and military high command.”

Mercenary camps in Colombia
The official reported that there are three places in northwestern Colombia where camps have been set up to train “terrorists to attack Venezuela.” These three sites are, as she said: Santa Marta, Riohacha and Maicao. Specifically, she delivered the following coordinates of the three camps:

At the UN headquarters, the official showed a photograph of the Venezuelan opposition deputy Juan Guaidó – who proclaimed himself in a public square “president in charge” – along with Colombian paramilitaries, specifically from the band ‘Los Rastrojos’. She reported that the Venezuelan authorities have sent the International Criminal Court “a video that contains the complete confession of a leader of the paramilitary band ‘Los Rastrojos'”, so it may be added to the preliminary examination on Colombia and paramilitarism.