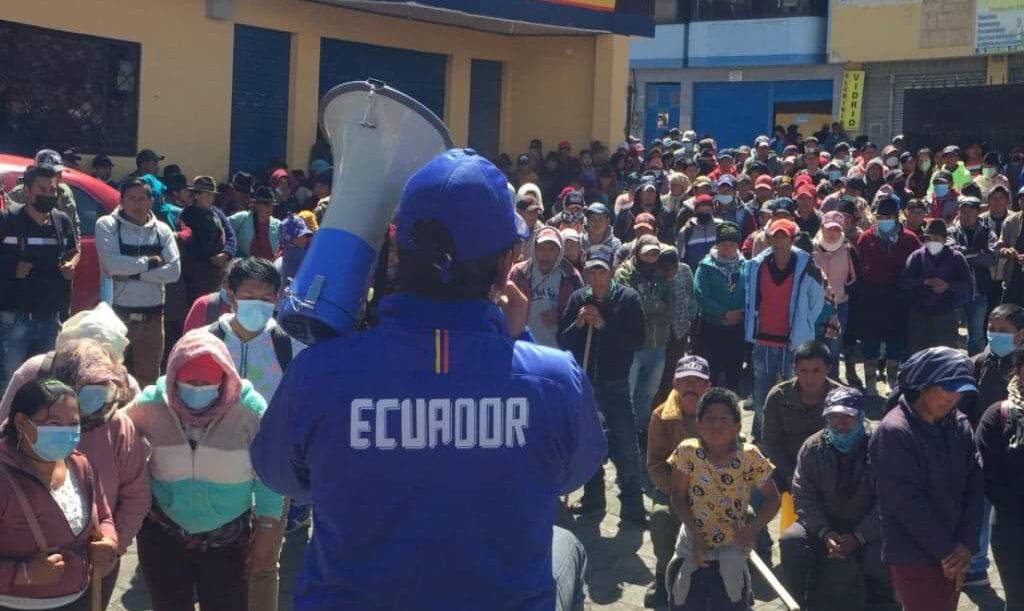 June 28 marked 15 days since the beginning of the demonstrations in Ecuador against the neoliberal government of Guillermo Lasso. During that time over 15,000 indigenous people and representatives of social movements have joined the protests to demand urgent actions to stop the collapse of the living conditions of the poorest and the entire working class. However, the state’s response has been violence and police repression, which has already caused six deaths, hundreds of wounded, and over 200 imprisonments.

According to the Confederation of Indigenous Nationalities of Ecuador (CONAIE), which is leading the protests, the demonstrations will continue as long as the government does not show itself willing to meet their most urgent demands. Namely, the reduction of fuel prices, a moratorium on the bank debts of the indigenous and peasant sectors, and the containment of illegal mining. CONAIE leader Leonidas Iza has stated that he was open to dialogue but that does not mean taking CONAIE members off the streets, they will be there as long as they want to be there and until the demands of the people are met.

The pressure on the streets forced President Lasso to overrule the state of emergency on June 25, as well as reduce the gasoline and oil prices by 10 cents (US) a gallon. He also promised to modify or overrule several decrees related to mining and oil extraction. However, the real impact of these few steps ahead is very limited. Iza considered them as a proof of the government’s “indifference towards Ecuadorian families.”

So far this year, fuel prices rose between 45% and 90%. Thus, the government’s proposal of reducing the price by 4% is insulting and token. According to CONAIE negotiators, the government can afford to pay 60% of the increment, and the population can take the remaining 40%. It means that Lasso’s measure in no way satisfies the people’s real needs. Nevertheless it is significant that he felt forced to bend at all.

Negotiations began on the night of June 27, but so far, no major progress has been achieved, although the protesters’ demands have been clear from day one. This is worrisome when the country’s economy has lost over $500 million during these 15 days. The tourist sector lost 76% of its bookings, while on June 28, the oil sector shut down due to the interruption of supply chains.

CONAIE has called on the government to cooperate in negotiations and avoid further damage to Ecuadorians. “Struggles always bring pain, they bring tragedies,” Iza said in an interview with the BBC. “We have comrades who have been murdered and directly shot in the head. We have done a lot to keep struggling. At this moment, [the solution] is in the hands of the president of the Republic.”

Meanwhile, the National Assembly should vote on Lasso’s impeachment in the next few hours. At the same time, Interior Minister Patricio Carrillo and Defense Minister Luis Lara have been summoned to account for their actions during the protests. Everything seems to indicate that the motion against Lasso will not succeed, since the Pachakutik party has stated they will not support Lasso’s impeachment, making it unlikely to gather the necessary 92 votes to remove the president from the office.

International condemnation of the heartbreaking images of repression in Ecuador and the murder of several citizens has been weak. The United Nations High Commissioner for Human Rights (UNHCHR) Michelle Bachelet has not spoken out, and the Organization of American States (OAS) has not initiated a single process or meeting to analyze this situation. Those who have spoken out, such as Human Rights Watch (HRW) and others, have limited themselves to calling for non-violence rather than condemning the excessive use of force by the police and the army.

Those who have mobilized to save the Ecuadorian government are its allies in the IMF, which recently hastily approved a $1 billion disbursement. These funds are part of an agreement signed in 2020, and according to the government, they will be employed to increase social spending, which does not match with its lack of flexibility to maintain affordable prices for basic commodities, including fuel, the main trigger for the protests.

Amid the current crisis, former President Rafael Correa has criticized Lasso for his lack of bravery to face the situation, and encouraged him to call for elections as Correa did in 2009, after approving a new Constitution. Lasso has used these statements to undermine the motion against him and the protests, arguing that Correa is behind both. It is clear that Lasso seeks to cover up the real reason for both problems, which is nothing but the result of several years of neoliberal policies and the continued reduction of public spending.

The conspiracy theory according to which Correa’s supporters are behind the current crisis is beyond absurd, since the CONAIE is the main organizer of the demonstrations and it is linked to the Pachakutik party, which has already supported Lasso against the impeachment.

The truth is that the total neglect of the humblest sectors has led Ecuador to this political and social crisis, which began with the government of Lenin Moreno and has been fostered by the COVID-19 pandemic and Guillermo Lasso’s mismanagement. Therefore, the solution must include a halt to the current privatization wave and the continued reduction of public services budgets.

However, regardless of the results of these negotiations, these protests have shown that the social movements continue to be the main defense of people’s interests. Today, Lasso has had to sit down to negotiate with indigenous representatives against his will and that of the businesspeople who support him. This has only been possible thanks to the coordinated action of the people on the streets. It is the most important lesson from the current situation in Ecuador.