A study conducted by the US economics and business agency Bloomberg, with five economists, forecast that Venezuela’s gross domestic product (GDP) is expected to grow 8.3% this year, after 1.9 % increase in 2021. This is to be the fastest rate of growth of the Venezuelan economy in 15 years.

Venezuela is recovering economically, with an increase in oil production and an expansion of tax revenues and bank credit, which suggests that domestic demand is increasing, according to the economists consulted by Bloomberg. 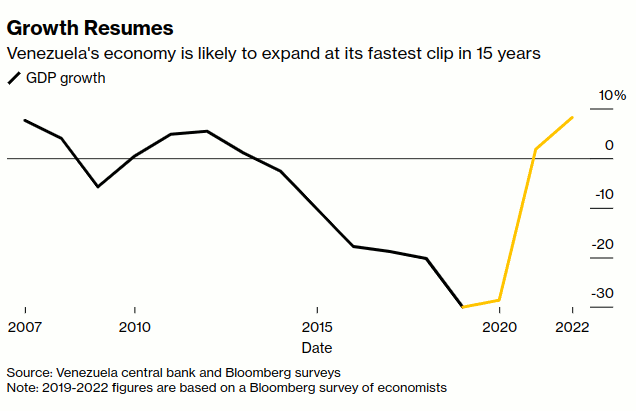 Venezuela suffered a deep crisis after the fall in oil prices in 2015 and 2016, accompanied by a series of unilateral coercive measures initiated in 2015 by then US President Barack Obama, who signed a decree alleging that Venezuela is “an unusual and extraordinary threat to the national security and foreign policy” of the United States.

The next US President Donald Trump intensified the blockade against Venezuela, announcing a series of unilateral coercive measures, which included the freezing of Venezuelan accounts in foreign banks, stealing CITGO, Monómeros and other Venezuelan companies abroad, and sanctions against companies of other countries that may trade with the Venezuelan government or the sanctioned Venezuelan companies—both public and private, making it impossible for the Venezuelan State to directly purchase goods from foreign countries, as well as making it difficult to sell oil and other products. The measures were imitated by numerous countries, most of them European, allied with the United States.

These measures caused a seven-year recession in Venezuela, which was the deepest recession in Latin America, and was marked by bouts of hyperinflation, rock-bottom public sector salaries, decimation of public services, and a major migration crisis. The country’s economy began to recover only in 2021.

Oil Prices
According to Bloomberg, Venezuela is benefiting from rising global oil prices, which have soared almost 50% this year to around $115 a barrel. With more foreign earnings from its biggest export, imports and consumption in Venezuela are on the rise.

“The country’s beleaguered energy sector,” notes Bloomberg, “has more than doubled production in the past two years, to around 700,000 barrels per day (bpd) of crude. Venezuela has the largest oil reserves in the world, and until 2010-2011 it produced 3 million barrels per day.”

“However, production is leveling off and the sector is desperate for more foreign investment, which is currently hampered by economic sanctions that prevent US companies from doing business with Venezuela’s state oil company PDVSA. If the United States eases sanctions, further investment could fuel an additional boost to production of up to 300,000 bpd,” said Guillermo Guerrero, a strategist at EMFI Group Ltd.

Although the present US administration of President Joe Biden has maintained most of the sanctions on Venezuela, it has indicated that it is willing to ease them “if President Nicolás Maduro moves towards resolving the political confrontation” with the opposition.

“Any easing of oil industry sanctions would provide a significant boost to growth,” Guerrero was quoted by Bloomberg.