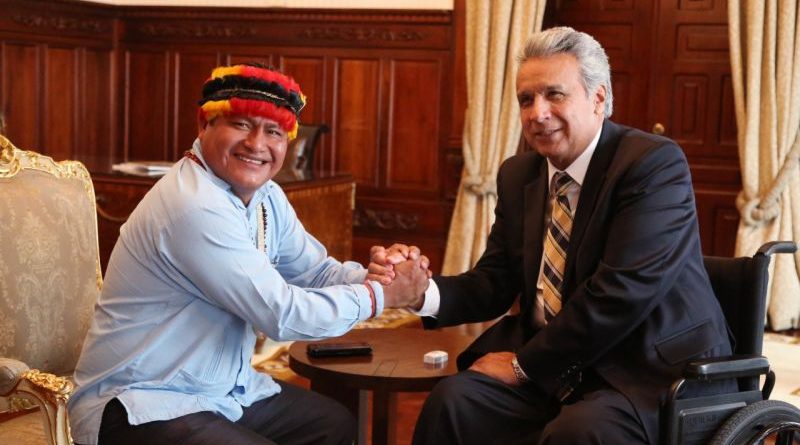 Ecuador’s President Moreno was elected in 2017 by campaigning to continue Rafael Correa’s leftist policies. Within weeks of taking office, he morphed into a right winger obsessed with inventing a public debt problem and outlawing Correa along with anyone who stayed loyal to him and his policies (Correaists). But a few weeks ago, things exploded when Moreno made his boldest move yet to return Ecuador to IMF bondage by eliminating fuel subsidies. Eight protesters were killed in eleven days before Moreno withdrew the decree that eliminated the subsidies.

One underappreciated fact about Ecuador’s recent protests is that a segment of Ecuador’s “left” leadership is partly responsible for the austerity measures they’ve been forced to protest.

It’s a lie that Ecuador is deeply in debt as I recently pointed out in a piece for FAIR.org. But many indigenous leaders reinforced that lie during nationally televised talks with President Moreno that ended the protests. The AP article I critiqued for FAIR said that some indigenous leaders called for higher taxes on the wealthy during these talks. But when former President Correa imposed land speculation taxes and inheritance taxes that were despised by Ecuador’s elite, they were also opposed by prominent indigenous leaders, like Carlos Perez Guartambel and Jorge Heredia, then president of the Confederation of Indigenous Nationalities of Ecuador  (known by its Spanish acronym, CONAIE). They dishonestly portrayed them as taxes that would impact everyone, rather than Ecuador’s richest 3%.

RELATED CONTENT: Peace Restored in Ecuador, But is Trust?

Obviously, one has to distinguish the leaders of groups like CONAIE from its base–as one would with any union or political party. There are also indigenous leaders who are pro-Correa (Ricardo Ulcuango, a former vice president of CONAIE, and Pedro de la Cruz) and others, like Leonidas Iza, who at least reject Moreno’s wildest accusations against Correa.

Virgilio Hernandez, one of the Correaists who was driven into the Mexican Embassy in recent days after police broke into his house, was deeply involved with CONAIE as an activist during the 1990s. I interviewed Hernandez for CounterPunch in 2018 and he mentioned CONAIE:

Since about the end of the 1990s and the beginning of this century I would say what is evident in CONAIE is that a current became dominant that we’d call a “conservative indigenist” current that has put everything into what they call the “ethnic cause” and left aside the causes of social movements and the left in the country. That explains not only what you describe (these tributes to people like Cesar Trujillo) but also that in the last presidential campaign they openly supported the candidate of the oligarchy and the banks, Guillermo Lasso. It is very clear for almost two decades they lost course and have been useful to the oligarchic groups that have always rabidly opposed Rafael Correa and the Citizens Revolution.

But weeks ago CONAIE’s leaders had no choice but to oppose Moreno’s brutal policy despite having collaborated with him since he took office as I’ll explain. Humberto Cholango, a CONAIE ex-president, speedily went from supporting Moreno’s subsidy elimination decree on Twitter to resigning from Moreno’s government and supporting the protests. There was no other way to maintain any credibility with CONAIE’s base.

But why do some Moreno “adversaries” get cordial nationally televised dialog with Moreno while others (including Correaists who are sitting democratically elected representatives like Paola Pabon, Yofre Poma and Gabriela Rivandeneira) get sent to jail or driven into exile?

The results of regional elections on March 24 are revealing as to why repression of Correaists has now intensified. They are the electoral threat.

On April 15, Torino Economics, who are no supporters of Correa at all, published an analysis of the regional elections that took place on March 24. The market analysts noted that Correa’s allies had not been allowed by Ecuador’s electoral authorities to register their own political party. That fact alone should ring alarm bells for any reasonable person. They ran candidates under the banner of a party (FCS) that had been founded in 2010. They were only able to run candidates in 48% of the provinces, 22% of the mayor’s offices and 10% of the parish councils.

Torino concluded that FSC’s performance suggested that a “Correaist” candidate could come in second in the first round of a presidential election, despite Moreno’s ruthless efforts to vilify and outlaw them. The analyst added that it is “definitely not hard to foresee that the next two years will see a strengthening of the support for Correismo as the economy attempts to implement a strict fiscal adjustment program.”

Moreno trampled all over judicial independence with the support of CONAIE’s leadership. (See my interview of Ecuadorian legal scholar Oswaldo Ruiz-Chiriboga for the details–Counterpunch, 10/12/18). The infamous “transitory” body Moreno picked to stack the judiciary, prosecutors’ office, and electoral authorities to his liking had Luis Macas, a former CONAIE vice-president, as one of its seven members.

Thanks to those unelected “transitory” authorities, under Moreno, the entire Constitutional Court was illegally fired and replaced a year ago. Unsurprisingly, the court upheld Moreno’s decision to call a state of exception during the protests. The same happened with Ecuador’s electoral authorities (who have been obstructing participation by Correaists). A CONAIE representative, Diana Atamaint, accepted the presidency of the illegally appointed electoral authority (CNE). She was supported by right-wing parties.

There are always segments of the “left” in Ecuador that enter into shady and inherently unstable alliances with the right.

An audio recording emerged on October 13 in which the president of Ecuador’s Socialist Party, academic Enrique Ayala Mora, laments that in his opinion, Moreno might not be able to parcel off any more bits of state power to CONAIE leaders (like control over bilingual education) and thereby leave Correaists, who he called “delinquents,” isolated. Of course, outlawing Correaists would electorally benefit “socialists” who support this kind of vile strategy. The parroting of right-wing claims about Ecuador’s public debt is one indication you are dealing with that kind of “socialist.” Ayala has backed calls for Correa to be jailed over the public debt. He also backed the bogus electoral fraud claims of the right wing candidate for president in 2017, Guillermo Lasso. The real fraud happened when Moreno took office and implemented Lasso’s campaign platform.

Elimination of fuel subsidies is one of many measures the IMF demands Ecuador use to punish the poor and benefit the rich. “Short term pain for long term gain” sums up the excuse, but a decade of progress under Correa exposed it as a brutal scam. Moreno will now try to adjust his giveaways to the rich to include some more for the fake left. An intensified campaign to criminalize Correaists appears part of the package.