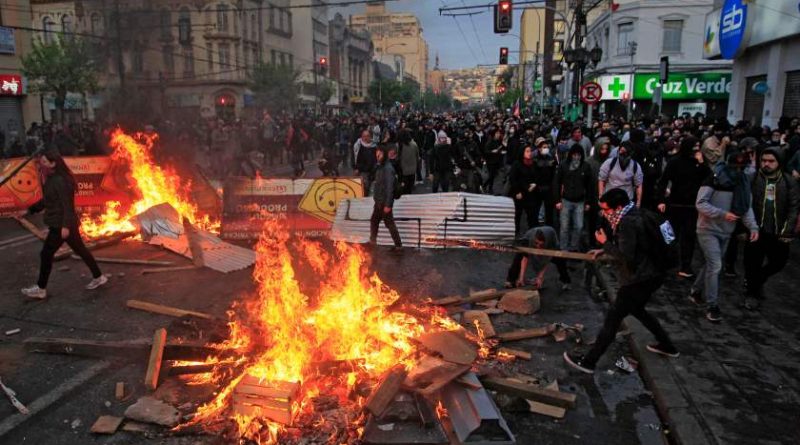 Chile’s combative and vigorous popular rebellion is not merely due to the disproportionate increase in the Metro ticket in Santiago. That was the straw that broke the camel’s back for a quarter century of crouched pinochetism that has continued there in strategic spaces, including economic, politics, media, and armed security forces.

In Chile, yes, there has been a sort of democratic scenography to disguise the fascism that really exists. The bloody repression from the very first moments of a totally peaceful protest, which only consisted first of skipping the turnstiles of the Metro by hundreds of teenagers and young people and, later on by thousands of people of all ages, warmed the temperature even more. The increase raised the price by 30 pesos, equivalent to 42 US cents per trip, and on a monthly average the cost per person has been calculated at about 14 percent of the minimum wage.

But the widespread insubordination of Chileans, as in Honduras and Haiti, occurred and will occur again in Ecuador, expressed with votes in Argentina and previously in Mexico, is against decades of misery, contempt, discrimination, gross and growing inequality and authoritarian government.

With a Constitution and a political culture inherited from Pinochet, with the economic and political marginalization and the growing impoverishment of the majority of the population, with the privatization and destruction of the public education and health systems, it is a true joke to say that in Chile there was a democratic transition or that there is a functioning democratic system. What is worth asking is how much democracy can neoliberalism really offer, in which rulers sell natural wealth, privatize everything and, at the same time, obscenely enrich themselves without consulting their peoples.

In systems where millions of dollars are invested in election campaigns, candidates are sold like toothpaste and respond to the protests with the brutality and savagery that we have seen in France, Catalonia, Ecuador, Honduras, Haiti, Colombia, Peru and, not to forget, the United States. In Chile it has been astonishing the severity of the military and riot police who were seen in videos intoxicating themselves with coca before they attacked.

For decades we have been listening to the media and the hegemonic academy say wonders about the great economic, democratic and even social successes of the Chilean model, made in Chicago by its intellectual author, the neoliberal pontiff Milton Friedman. For now, I am waiting for Mrs. Bachelet, the UN High Commissioner for Human Rights, to go beyond confessing sadly and condemning – as she unjustly and without proof did with Bolivarian Venezuela – the murders, beatings, tortures and rapes of men and women in the middle of the street, day and night, that we are seeing with horror in the videos that circulates in social networks and in the few media outlets that has reported the truth about the 10 days of incessant protests.

However, even worse than Bachelet, is the repugnant OAS of the energetic Luis Almagro cites, with extraordinary character, its Permanent Council, but not to know about the crimes against humanity being committed against its people by the government headed by Sebastián Piñera, but rather to prosecute the presidential election in Bolivia of Evo Morales like nothing is happening in Chile!

Bolivia is an example of participative and protagonist democracy, for having liquidated the oligarchic republic with a popular Constituent that founded the first plurinational State of Latin America and the Caribbean, which recognizes all the rights of the indigenous peoples that inhabit it and of all its citizens. This has led to the abatement of poverty and inequality, the creation of an education and public health system that was unimaginable before Evo, as Bolivia previously competed with Haiti for the very lowest rung of human development indexes in the Americas.

Now, the United States and the right, with the racism that is characteristic of them, are angry at the delay in counting the votes of the remote mountainous and Amazonian indigenous regions and cynically shout fraud. It’s very simple to understand. These areas are inhabited by countless villages with 100 or fewer inhabitants who are very distant and isolated from each other, and although communications has improved a lot, most still do not have a telephone connection. So it is well known the reason for the existing delay in the counting of those votes, always favorable to Evo.

What Washington and the local oligarchy have been doing for months is another attempted coup d’état against the indigenous president and to achieve this they have started a wave of fires against electoral tribunals. Terrorism is their thing, but Evo and the people have always defeated them.