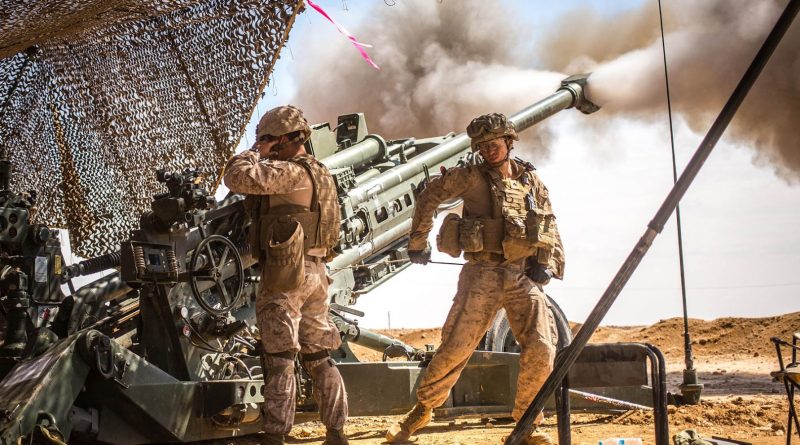 Hundreds of American soldiers are remaining in Syria to occupy its oil reserves and block the Syrian government from revenue needed for reconstruction. Trump said openly, “We want to keep the oil.”

US President Donald Trump has reassured supporters that he is “bringing soldiers home” from the “endless” war in Syria. But that is simply not the case.

While Trump has ordered a partial withdrawal of the approximately 1,000 American troops on Syrian territory — who have been enforcing an illegal military occupation under international law — US officials and the president himself have admitted that some will be staying. And they will remain on Syrian soil not to ensure to safety of any group of people, but rather to maintain control over oil and gas fields.

The US military has already killed hundreds of Syrians, and possibly even some Russians, precisely in order to hold on to these Syrian fossil fuel reserves.

Washington’s obsession with toppling the Syrian government refuses to die. The United States remains committed to preventing Damascus from retaking its own oil, as well as its wheat-producing breadbasket region, in order to starve the government of revenue and prevent it from funding reconstruction efforts.

The Washington Post noted in 2018 that the US and its Kurdish allies were militarily occupying a massive “30 percent slice of Syria, which is probably where 90 percent of the pre-war oil production took place.”

Now, for the first time, Trump has openly confirmed the imperialist ulterior motives behind maintaining a US military presence in Syria.

“We want to keep the oil,” Trump confessed in a cabinet meeting on October 21. “Maybe we’ll have one of our big oil companies to go in and do it properly.”

Three days earlier, the president tweeted, “The U.S. has secured the Oil.”

…..this thinking years ago. Instead, it was always held together with very weak bandaids, & in an artificial manner. There is good will on both sides & a really good chance for success. The U.S. has secured the Oil, & the ISIS Fighters are double secured by Kurds & Turkey….

“President Trump is leaning in favor of a new Pentagon plan to keep a small contingent of American troops in eastern Syria, perhaps numbering about 200, to combat the Islamic State and block the advance of Syrian government and Russian forces into the region’s coveted oil fields.

… A side benefit would be helping the Kurds keep control of oil fields in the east, the official said.”

Trump then explicitly reiterated this policy in a White House press briefing on the Syria withdrawal on October 23.

“We’ve secured the oil (in Syria), and therefore a small number of US troops will remain in the area where they have the oil,” Trump said. “And we’re going to be protecting it. And we’ll be deciding what we’re going to do with it in the future.”

Using ISIS as an excuse to occupy Syria’s oil fields
US Secretary of Defense Mark Esper – the former vice president of government relations at top weapons manufacturer Raytheon, before being promoted by Trump to the head of the Pentagon – revealed the actual US policy on Syria in a press conference on the 21st:

“We have troops in towns in northeast Syria that are located next to the oil fields. The troops in those towns are not in the present phase of withdrawal.

… Our forces will remain in the towns that are located near the oil fields.”

Esper added that the US military is “maintaining a combat air patrol above all of our forces on the ground in Syria.”

Unlike Trump, Esper offered an excuse to justify the continued US military occupation of Syria’s oil fields. He insisted that American soldiers remain to help the Kurdish-led Syrian Democratic Forces (SDF) hold on to the resources and prevent ISIS jihadists from taking them over.

This led mainstream corporate media outlets like CNN to report, “Defense secretary says some US troops will temporarily stay in Syria to protect oil fields from ISIS.”

But any observer who carefully parsed Esper’s comments during his press conference would have been able to detect the real goal behind the prolonged US presence in northeastern Syria. As Esper said, “A purpose of those [US] forces, working with the SDF, is to deny access to those oil fields by ISIS and others who may benefit from revenues that could be earned.”

“And others who may benefit from their revenues earned” is a crucial qualifier. In fact, Esper used this language – “ISIS and others” – two more times in his presser.

Who exactly Esper meant by “others” is clear: The US strategy is to prevent Syria’s UN-recognized government and the Syrian majority that lives under its control from retaking their own oil fields and reaping the benefits of their revenue.

US military massacred hundreds to keep control of Syrian oil fields
This is not just speculation. CNN made it plain when it reported the following in an undeniably blunt passage, citing anonymous US senior military officials:

“The US military has long had military advisers embedded with the Syrian Democratic Forces near the Syrian oil fields at Deir Ezzoir ever since the area was captured from ISIS. The loss of those oil fields denied ISIS a major source of revenue, a one-time source of funds that has differentiated the organization from other terror groups.

The oil fields are assets that have also been long sought after by Russia and the Assad regime, which is strapped for cash after years of civil war. Both Moscow and Damascus hope to use oil revenues to help rebuild western Syria and solidify the regime’s hold.

The US forces near the oil fields remain in place and senior military officials had previously told CNN that they would likely be among the last to leave Syria.”

CNN thus acknowledged that the US military had killed up to “hundreds” of Syrian and Russia-backed fighters seeking to gain access to Syria’s oil fields. It massacred these fighters not for humanitarian reasons, but to prevent the Syrian government from using “oil revenues to help rebuild western Syria.”

This shockingly direct admission flew in the face of the popular myth that the US was keeping troops in Syria to protect Kurds from an assault by NATO member Turkey.

The CNN report was an apparent reference to the Battle of Khasham, a little known but important episode in the eight-year international proxy war on Syria.

The battle unfolded on February 7, 2018, when the Syrian military and its allies launched an attack to try to retake major oil and gas reserves in Syria’s Deir ez-Zour governorate, which were being occupied by American troops and their Kurdish proxies.

The New York Times seemed to revel in the news that the US military massacred 200 to 300 fighters after hours of “merciless airstrikes from the United States.”

The Times repeatedly stressed that Deir ez-Zour is “oil-rich.” And it cited anonymous US officials who claimed that many of the slaughtered fighters were Russian nationals from the private military company the Wagner Group. These unnamed “American intelligence officials” told the Times that the alleged Russian fighters were “in Syria to seize oil and gas fields and protect them on behalf of the Assad government.”

The Times noted that US special operations forces from JSOC were working with Kurdish forces at an outpost next to Syria’s important Conoco gas plant. The Kurdish-led SDF had seized this facility from ISIS in 2017 with the help of the US military. The Wall Street Journal noted at the time that the “plant is capable of producing nearly 450 tons of gas a day,” and was one of ISIS’ most important sources of funding.

The newspaper added, “The Kurdish-led Syrian Democratic Forces, backed by U.S.-led coalition airstrikes, are racing against the regime of President Bashar al-Assad for territorial gains in Syria’s east.” The commodities monitoring websites MarketWatch and OilPrice.com were closely following the story and analyzing which forces would take over one of Syria’s most important gas plants.

Starving Syria of oil and wheat, the basics of survival
For the Syrian government, regaining control over its oil and gas reserves in the eastern part of its territory is crucial to paying for reconstruction efforts and social programs — especially at a time when suffocating US and EU sanctions have crippled the economy, caused fuel shortages, and severely hurt Syria’s civilian population.

The US has aimed to prevent Damascus from retaking profitable territory, starving it of natural resources from fossil fuels to basic foodstuffs.

In 2015, then-President Barack Obama deployed US troops to northeastern Syria on the grounds of helping the Kurdish militia the People’s Protection Units (YPG) fight ISIS. What started as several dozen US special operations forces quickly ballooned into some 2,000 troops, largely stationed in northeastern Syria.

As these US soldiers enabled the YPG retake territory from ISIS, they solidified Washington’s control over nearly one-third of Syrian sovereign territory — territory that just so happened to include 90 percent of Syria’s oil, as well as 70 percent of its wheat.

The US subsequently forced the Kurdish-led YPG to rebrand as the SDF, and then treated them as proxies to try to weaken the Syrian government and its allies Iran and Russia.

In June, Reuters confirmed that Kurdish-led authorities had agreed to stop selling wheat to Damascus, after the US government pressured them to do so.

The Grayzone has reported how the Center for a New American Security, a leading Democratic Party foreign policy think tank bankrolled by the US government and NATO, proposed using the “wheat weapon” to starve Syria’s civilian population.

A former Pentagon researcher-turned-senior fellow at the think tank declared openly, “Wheat is a weapon of great power in this next phase of the Syrian conflict.” He added, “It can be used to apply pressure on the Assad regime, and through the regime on Russia, to force concessions in the UN-led diplomatic process.”

Donald Trump appeared to echo this strategy in his October 21 cabinet meeting.

“We want to keep the oil, and we’ll work something out with the Kurds so that they have some money, have some cashflow,” he said. “Maybe we’ll have one of our big oil companies to go in and do it properly.”

While Trump has pledged to bring US soldiers home and end their military occupation of Syrian territory – which is illegal under international law – it is evident that the broader regime change war continues.

A brutal economic war on Damascus is escalating, not only through sanctions but through the theft of Syria’s natural treasures by foreign powers.