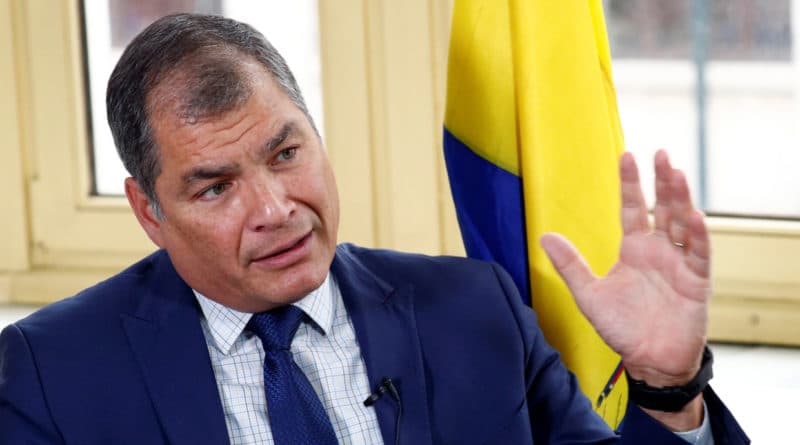 This Tuesday a chamber of the National Court of Justice in Ecuador sentenced former President Rafael Correa to 8 years in prison for the alleged crime of “aggravated bribery”, as he was considered a “perpetrator” along with former Vice President Jorge Glas. The sentence not only condemns Correa to spending time in prison, but also disables his political participation in Ecuador for 25 years, a fact that the Ecuadorian ex-president has been denouncing and that he has described as a political persecution or lawfare launched by current president, Lenín Moreno.

According to the sentence, issued by the judges Iván León, Marco Rodríguez and Iván Saquicela, in the case called “Bribery Case 2012-2016”, Correa and Glas are considered “perpetrators of instigation of aggravated bribery.”

Judge Leon specified that the victim in this case is the State and that this was proven by the Prosecutor’s Office. “It has been proven that the payments were reported to the highest hierarchical level, led by Rafael Correa and former Vice President Jorge Glas,” León read during the sentencing.

“They don’t learn from history. They did not understand anything about Lula, Cristina, Evo. Of course, with this persecution they cause harm in the short term. But in the long run they only make us invincible. They will not be able to change the course of history. We will resist and we will win!” Rafael Correa wrote on the social network Twitter, after learning of the sentence.

For the alleged participation of the other 20 ex-officials involved in the financing of proselytizing activities of the Correa political party, Alianza PAÍS, with state contractor entrepreneurs exceeding $ 7.5 million, between 2012 and 2016, they were declared co-authors and with the same sentence of 8 years.

The courts also include the former legal secretary of the presidency, Alexis Mera, and the former minister of Transport and Public Works, María de los Ángeles Duarte.

Correa’s Response
Correa asserted that the trial and sentencing process is due to a show that only sought to prevent his participation in the next presidential elections.

Later, in statements to the RT web site, Correa pointed out from his home in Brussels (Belgium): “We were waiting for it, they were desperate to condemn me for whatever.” In that tone, the South American leader said: “In a state of laws, it would be impossible.”

From his point of view, the judicial decision was made to limit his electoral aspirations and divert public attention from the health emergency that the nation is going through, in the midst of the coronavirus pandemic: “Distracting the country’s energies, we should be focused on the crisis, of the unburied dead.”

In this regard, the interviewee insisted that the authorities should now focus on “how the epidemic is rising.”

To dismiss the process, the leader reviewed: “This has neither head nor feet. Their main evidence was files that were in an adviser’s folder. We managed to obtain them and with international experts we showed that they were hacked in 2016 and modified until 2018, something totally forged.” In fact, this irregular element can not finally be taken into account, highlights the Latin American politician.

He also stressed: “Yesterday there was a leak of thousands of documents, showing that the prosecutor’s secretary was in permanent contact with the president of the Tribunal.” Regarding this, he clarified that, although it is true that there was an emotional bond between them, they committed the irregularity of sending information about the trial: “They did not exchange electricity bills or telephone bills. No! The process! That is illicit association.

On the political and judicial situation in Ecuador, the former head of state maintained that “there is no justice, and Europe says nothing.” In effect, he exemplifies it with other causes that he had to face: “They accused me of having murdered a person, the person appears alive, but they continue to accuse me of murder, saying that he was resurrected. It is irrational already.”

Ricardo Patiño, who led the direction of the Ministry of Foreign Relations, the Ministry of Economy and Finance and the Ministry of Defense during the Correa presidency, denounced the persecution, in the midst of a pandemic like Covid-19 that has submitted Ecuadorians into a catastrophe. “Ecuador is going through an unprecedented humanitarian crisis. However, the persecution does not stop as they are afraid that Rafael Correa and the citizen revolution will win again at the ballot box. Enough of so much abuse,” he said in a tweet.

The Bribery Case began in May 2019, when the La Fuente website published an investigation in which it was exposed that through financial contributions from multinational companies, including Odebrecht, they collaborated for the presidential campaign of Correa’s Alianza PAÍS party.

In this investigation, it is specified that Pamela Martínez, then Correa’s adviser, received the financial contributions in 2014, however; the former head of state assures that she abused her position and she was caught, but to be free they told her: “If you accuse Correa, we will set you free”, and indeed; she was released months later. However, Martínez received a sentence of 38 months in prison on Tuesday, thanks to her cooperation during the case.

Because of this sentence, Correa will not be able to run for any position in the legislative and presidential elections of 2021 and that political disqualification will remain in force for 25 years.

There are no precedents in the country for a trial of such magnitude. The process that approaches it is the Odebrecht case, in 2017. That one lasted 14 days, then the court took five more days to deliberate and to sentence former vice president Jorge Glas to six years.