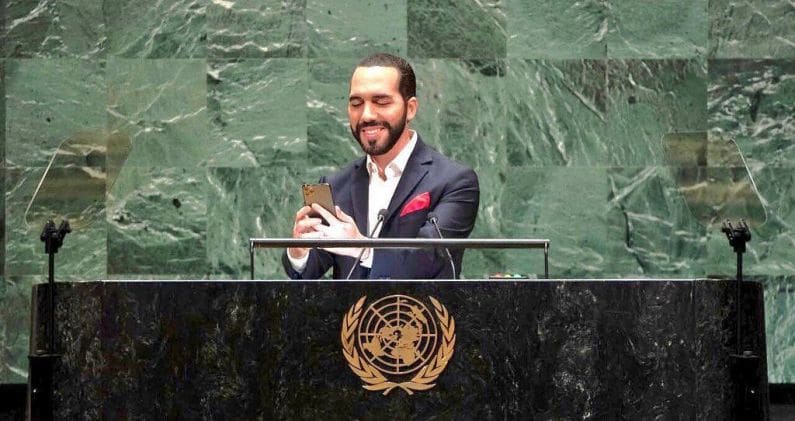 April 30, 2022 (OrinocoTribune.com)—Various social movements and trade unions of El Salvador denounced attempts by the government of President Nayib Bukele to criminalize the marches called for this May 1. Associations such as Bloc of Resistance and Popular Rebellion (BRP), National Alliance for El Salvador in Peace, Salvadoran Coordination Committee of Popular Movements and some other groups that have called the May Day marches, released statements condemning the administration of President Nayib Bukele for associating the movements with organized crime.

The statements came after the Salvadoran Labor Minister Rolando Castro claimed on Thursday, April 28, that those who are going to march on May 1 are “collaborators and financiers of criminal gangs.”

Rolando Castro, speaking to the press on Thursday, said that the “real trade union movement” informed the government that they would not be holding rallies on Sunday, May 1, respecting the State of Emergency that has been in force in El Salvador since March 27, to combat gang violence and organized crime according to the government. In this regard, the minister said that the Salvadoran government, together with this sector of the working class, will hold an event where “very important things for the working class” will be announced.

Castro then went on to compare this “real trade union movement” with “spokespersons of different political parties, mainly of [opposition] ARENA, FMLN” who are “calling on people, family members, friends of gangs to come out to march.” According to him, the social movements and trade unions that will be out on the streets, in rallies, “are trying to denaturalize the International Workers’ Day by defending the gangs.”

“Those who are calling for the march,” continued the minister, “[from] any starting point, it will be clear in the history of El Salvador that they are relatives, collaborators and financiers of criminal groups in El Salvador.” He also threatened that they could be arrested at any moment under any circumstance.

The Salvadoran Coordination Committee of Popular Movements condemned such statements that intend to criminalize an internationally recognized commemoration. “We reiterate the call to march this May 1, Workers’ Day, against corruption, the criminalization of poverty and youth, unjustified dismissals, job insecurity and threats of repression against the working class,” the Committee said in a statement.

Two other associations of social movements, the Bloc of Resistance and Popular Rebellion and the National Alliance for El Salvador in Peace, held a joint press conference where they denounced the Bukele government’s “offensive against unions, trade unions and social organizations.”

Ingrid Escobar, a leader of the National Alliance for El Salvador in Peace, said that her organization is going to March on Sunday in defense of the rights of women workers, who have been fired from their jobs, not paid their salaries, have been threatened or pressured into working longer hours. “Does this make me a criminal?” she questioned.

José Santos Melera, national coordinator of the Alliance, stressed that President Bukele “is afraid of being questioned” for the failures of his administration. “We are not afraid, we will be here, President,” he added, referring to the threats of arrest made by a number of government and police officials. He also asserted that 15,000 people will attend the traditional May Day marches in the capital San Salvador.

Trade unionist Sonia Urrutia of BRP decried that the labor minister would accuse workers of being financiers of gangs when International Workers’ Day is a date that the working class has always commemorated. “I would like to remind him that every year, on 1st May, we have gone out to commemorate, to celebrate, at the international level, that heroic act of the martyrs of Chicago in 1886,” said Urrutia at the press conference. “And to commemorate the fallen heroes of the historical battles of the trade union movement, of revolutions of the proletariat all over the world. We will march also because this Bukele regime has been something very negative for the working class, whose quality of life has deteriorated due to the continuous rise of prices and the growing unemployment.”

Francisco Omar, also of BRP, said that workers are not criminals.

The Bloc and the National Alliance also released a joint statement, reiterating their decision to continue with their planned rallies on May Day.

About 20 associations of trade unions and social movements, including students’, teachers’ and lawyers’ organizations, have called for marches on May 1, which will start at 8:00 a.m. from various locations in San Salvador, such as the Cuscatlán Park, the University of El Salvador, the National Sports Institute (INDES), and the Ministry of Finance headquarters. Many of these rallies are to terminate at the Plaza Cívica around midday.