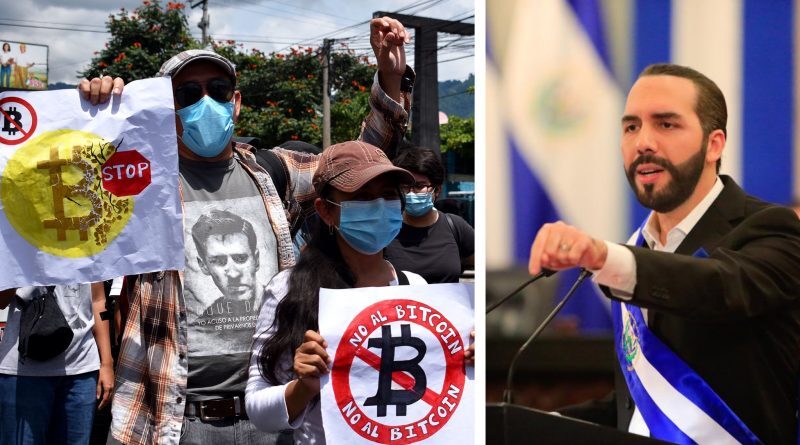 A major mobilization is expected in El Salvador last Wednesday, September 15, against Nayib Bukele’s militarization, political persecution, and in rejection of the new Bitcoin law.

The country’s social movements will mark ‘200 Years of Resistance’ on the Bicentennial of the Declaration of Independence of the Peoples of Central America, observed on September 15th.

Protests against the Bitcoin law were held during the first days of September, and again on the 7th, when it took effect. Since then, Bukele has announced that El Salvador would exempt foreign investors from tax on Bitcoin profits, providing further evidence of his intentions to impose the cryptocurrency within a neoliberal framework.

The government’s neoliberal authoritarian trajectory became increasingly evident with the announcement that the police and military would be doubled in size. Meanwhile, five former cabinet members of the leftist FMLN were illegally detained in July, with arrest warrants issued for other leaders of the previous government, including former President Salvador Sánchez Cerén.

“Nobody was expecting so many calls to mobilize. At the beginning, there were only two; one from a group of social movements—which AMATE is in—and another one from organizations related to the FMLN. In a matter of days, around 10 other calls were made by different organizations.”

Roberto says that while discontent is growing and protests have become more frequent, limited coordination exists among the wide range of organizations; “You know, right now we don’t have a lot of coordination between blocks but after tomorrow we hope to start conversations between blocks of the left and progressives very soon.”

Demonstrators will also be expressing rejection to Bukele’s intention to seek a consecutive term in office following the Supreme Court’s September 3rd ruling which could enable Bukele to bypass the Constitution and run in the next presidential election.

While the Constitution requires “alternance” in the presidency, the Head of the Supreme Electoral Tribunal has indicated he would abide by the ruling. The resolution was made by an illegitimately installed Supreme Court who took the bench after Bukele’s Nuevas Ideas party ousted their predecessors on May 1st.

Over 200 judges were expelled as a result of a reform passed by Nuevas Ideas to purge all judges and public prosecutors over the age of 60 from the bench, including some who had recently made significant rulings unfavorable to the Bukele administration.

Bukele’s El Salvador has been compared to neighboring Honduras, where social movements are also planning to mark the Bicentennial with protests in defense of sovereignty against Juan Orlando Hernandez’s ZEDEs. Former President Manuel Zelaya published a message on Tuesday, saying there is nothing to celebrate and called on movements to mobilize and fight for real independence.

El Salvador and Honduras both experience the highest rates of violent crime in the world outside of war zones while hosting U.S. military operations. Washington has hypocritically condemned Bukele’s anti-democratic governance as it continues to strengthen Southcom operations in El Salvador, all while providing military equipment to Salvadoran police and military.