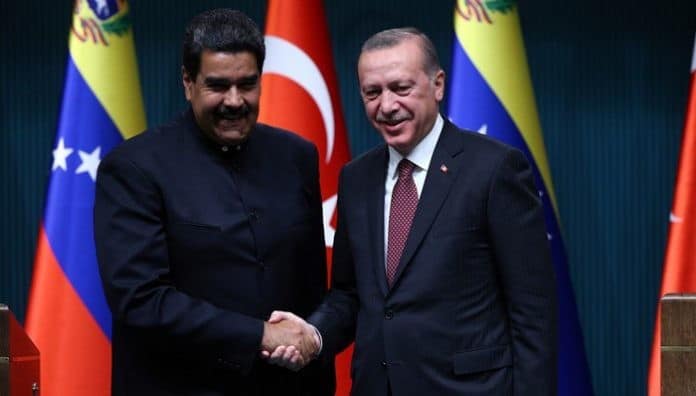 Ankara (TM) – Turkey’s President Recep Tayyip Erdoğan said on Tuesday that Venezuelan gold would be processed in the Central Anatolian province of Çorum.

Speaking at a rally ahead of local elections on March 31, the president said Çorum would ugreach a new level in terms of gold trade amid reports that Venezuela sells most of its gold to Turkish refineries.

On Monday Reuters reported that Venezuela uses some of the proceeds to buy consumer goods such as pasta and powdered milk, citing people with direct knowledge of the trade.

Venezuelan President Nicolas Maduro’s gold program has developed in tandem with his deepening relationship with Turkey’s Erdoğan. Both leaders have been criticized internationally for cracking down on political dissent and undermining democratic norms to concentrate power.

A Nov. 1 executive order signed by US President Donald Trump bars US persons and entities from buying gold from Venezuela. It does not apply to foreigners. Ankara has assured the US Treasury that all of Turkey’s trade with Venezuela is in accordance with international law.

Venezuela in December 2016 announced a direct flight from Caracas to İstanbul on Turkish Airlines. The development was surprising given the low demand for travel between the two nations.

Trade data show those planes are carrying more than passengers. On New Year’s Day, 2018, Venezuela’s central bank began shipping gold to Turkey with a $36 million air shipment of the metal to Istanbul. It came just weeks after a visit by Maduro to Turkey.

Gold buyers include Istanbul Gold Refinery, or IGR, and Sardes Kıymetli Madenler, a Turkish trading firm, according to a person who works in Turkey’s gold industry as well as a Caracas-based diplomat and the two senior Venezuelan officials.

In an interview with Reuters, IGR CEO Ayşen Esen denied the company has been involved in any Venezuelan gold deals. In a written statement, she said she met with Venezuelan and Turkish officials in İstanbul in April to offer her views on compliance with international regulations.

Esen said she advised the Turkish government that working with Venezuela “would not be right for leading institutions or the state.”

As for Sardes Kıymetli Madenler, no one at its İstanbul offices responded to inquiries from Reuters.

Turkish consumer products, meanwhile, are making their way to Venezuelan tables. In early December 54 containers of Turkish powdered milk arrived at the port of La Guaira near Caracas, according to port records seen by Reuters.

The İstanbul-based shipper, Mulberry Proje Yatırım, shares an address with Marilyns Proje Yatırım, a mining company that signed a joint venture with Venezuela’s state mining firm Minerven last year, according to filings with a Turkish trade registry gazette in September.