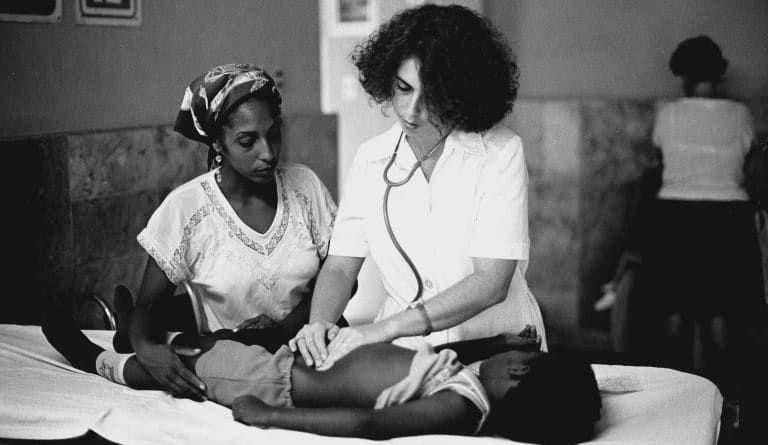 As long as the health (or illnesses) of people is a marketable commodity in which many laboratories, universities, government institutions, hospitals and doctors are ensnared like vampires… as long as there are people without medical security… as long as the pathological habits and manias that inoculate the advertising mafias against public health reign… we will live a monstrous injustice that has become naturalized as part of the miserable decor of class-divided societies. Every day, in the early hours of the morning, lines of people are at the doors of hospitals, waiting for a consultation, suffering from a litany of human rights violations while, for example, the pharmaceutical industry (13 of the 20 most voracious) installed in Puerto Rico, receives Caymanian tax benefits and moves healthy fortunes to the tune of 60 billion dollars.

Capitalism trains doctors, nurses and health care workers like it trains an army of mercenaries who sell cynical tests, diagnostic studies, surgeries, drugs and therapies. Their heads are molded with bourgeois aspirations and dreams (stereotyped to the point of nausea) so that they can impudently exhibit their loyalty to the businesses of the owners of the laboratories that have previously trained their bosses. “Pfizer is currently the largest pharmaceutical company, reporting $45 billion in profits. Multinational companies such as Glaxo Smith Kline, Merck & CO., Bristol-Myers Squibb, AstraZeneca, Aventis, Johnson & Johnson, Novartis, Wyeth, and Eli Lilly, have captured 58.4% of the market in the amount of around $322 billion

One can easily see the display of arrogance and petulance that many doctors who have leadership roles walk through every clinic, hospital, or laboratory in front of the nurses, students, and workers who must learn first and foremost to turn their humiliation into good grades, diplomas, special appointments, or awards, such as attendance at conferences, publication of papers, and gifts from laboratories. We are not frightened, nor are we silenced, by the doctors who wrap themselves up in swarms of terminology and statistics in order to present themselves into the realm of arch-specialized erudition and where not only are the most obvious denunciations not accepted but are also seen as rudeness in “bad taste”. The academies and associations of specialists and many hospitals are full of these good-natured demagogues, technocrats and bureaucrats. Is this an exaggeration?

Doctors, nurses and health workers are often trained to adopt reactionary ideas and mediocre behavior as their own. Their heroism comes down to being subservient and meek in business and bringing the glories of their bank accounts and earthly goods into the realm of their individualism. Their heroism has as its alma mater a merciless vanity trained daily in the concentration camp to which they subject their “patients” and their relatives.

Many “little doctors” make themselves pay for their magnanimity with eternal gratitude, and flattery, thanks to extorting everyone with the old trick of haggling over information, talking in a didactic and condescending tone, playing at the fact that time never catches up with them, and pulling miraculous solutions out of their sleeves. Many under the method of the shotgun… some pellet will hit the partridge. The more drugs they try… the better gifts the labs will send. There’s an international ranking of awards in hotels, airlines and various merchandising. Doctors, nurses and health workers learn this from the first lessons.

They dream of infecting our lives with the saliva of bureaucrats who are servile to the neoliberal carnage. They are “doctors” of inoculations for usurious epidemics among the pharmaceutical markets, which are a breeding ground for neoliberal demagogy and the weight of misery and crime, hunger, unemployment and galloping injustice. We are paying for it.

Old people victimized with indolence… sick people eaten away by bureaucracy. Children stunned by the future we inherited for them. It’s a monstrosity. We live infested with neglect. The poorest are more unprotected, not well-fed, unable to go to the doctor, unable to pay for medicine and generally unable to care for their health. This is no small thing.

Cynicism reigns. We know that the health crisis is the best expression of capitalist irrationality. The monopolies impose their businesses as if they were health policies and impose market conditions so as to speculate on drugs and prices. They own the health of millions of human beings.

It is clear that the obscene trade-in diseases, reaching millions in any currency, requires government managers responsible for legalizing the transaction and devise creative mechanisms to get more out of the victims. For example, they build hospitals to consume the thousand and one products that, when priced at the price of the government that best suits the supplying companies. All of this is dependent on the rapid disengagement of “patients” so that they do not add to the costs that could threaten the spread of corruption. Today, in the extreme obscenity of the medical corruption system of many countries, patients are forced to bring their sheets, forks, water, bandages and bedpans to the hospitals…why aren’t there more doctors protesting this?

Many doctors, and their cronies, like to celebrate efficiency and patient care figures. They get drunk on successful statistics that overflow PowerPoint charts, books, treatises, and encyclopedias. If every page edited with triumphalist glossaries involved a person being cared for efficiently… there would be no health crisis in the world. And medicine would no longer be a bourgeois industry but an inalienable social right.

At the apex of the alma mater in the medicalized doctors, helping to sell drugs, many of which are unnecessary, in the service of the pharmaceutical laboratories, all knotted together in a multinational network of investors who, as in all commerce, govern their tasks by the capitalist laws of supply and demand. Would it surprise us to know how many times they have invented epidemics, pandemics and contagions to circulate millions of vaccines, syringes, pills, creams or ointments?

The capitalist material base of this medical world industry supports an ideological –methodological dressed up as “science” in which technical operations have been protocolized with financial operations where those who win are the owners of the business.

The bourgeois “philosophy” of the “health industry” has produced during its history an insatiable monster entangled with the most deplorable anecdotes of corruption and impunity. What matters least to them is the eradication of disease because that diminishes the income of the pharmaceutical industry. It doesn’t matter that many of the “medical” products (from operating rooms, pharmacies, hospital hotels and all the paraphernalia) have no proven effectiveness… the important thing is to cover the monthly goals in terms of sales and collections. This is their “philosophy”, period.

Their “philosophy” makes no commitment to an effective fight against the diseases that burden the workers, what matters is the royalties and the seizure of the patents to enjoy exclusivity in the usufruct of a disease and more if it becomes epidemic

Their “philosophy” also consists of investing millions, to hide under the carpet, the business plans related to research that they call “scientific”. It is not the social good that determines investments, nor is it what determines health policies… it is blatantly the search for private financial gain for a handful of monopolies pimped by servile governments. If this means manipulating and falsifying data, if this means publishing magazines, organizing conferences and awarding “Nobel prizes”… such a heavy industry will not be stopped. It will not have methodological or moral itches, a dishonest industry that disguises itself with the word Science to hide its “philosophy” of business.

The list of errors with which the industrial manufacture of medicines is handled is enormous. There are complaints and debates that are generally hidden because they spoil the picture. The pharmaceutical industry has controls over the vast majority of specialist publications and popular science journals. The pharmaceutical industry spends fortunes on advertising and on gifts for its favorite doctors. It is a dictatorship. Meanwhile, doctors are the third largest cause of death in the U.S.: they cause 250,000 deaths per year. (https://www.usnews.com/news/articles/2016-05-03/medical-errors-are-third-leading-cause-of-death-in-the-us)

We do have Cuba, as the opposite example, whose medical system is without payment and under workers control. It is pushing back against the infernal capitalist machine producing ecological crisis, illness and death.

At this time it is necessary to reformulate all our theoretical-methodological conceptions on health and adopt socialist health policies. Take advantage of the best achievements and free them from the clutches of capitalism. To transform teaching models and medical education at all levels.

Socialist prevention and planning, education and the culture of health, dignified employment for the social security workers is needed to establish a socialist philosophy of health that privileges dignified life as a concrete and inalienable right. To link the problem of health with the preservation of ecosystems. To guarantee fair and democratic material conditions of existence. The most advanced discoveries in medicine cannot be the private property of a handful of capitalists. Only a rationally planned socialist economy will be able to develop a wealth of knowledge in the field of health to put it truly at the service of humanity and its development. That will be truly curative.