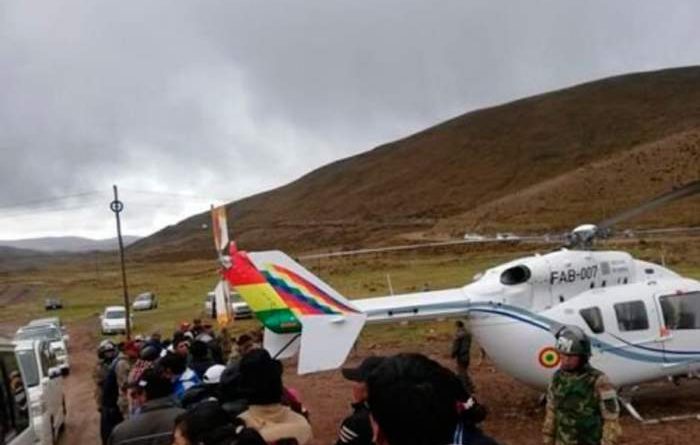 The emergency landing was as a result of a mechanical failure in the aircraft that was noticed by the pilot upon takeoff.

The Bolivian Air Force reported Monday that a presidential helicopter moving President Evo Morales had to make an emergency landing due to a mechanical failure, near Colquiri (La Paz), where the Bolivian president was inaugurating a road.

Through a statement, the air force explained that during the takeoff the pilot had noticed a problem and landed immediately.

The statement said that an investigation will be carried out into the accident, while also confirming that there were no injuries to the president or others who were with him in the aircraft.

the Minister of the Presidency Juan Ramón Quintana confirmed to teleSUR’s correspondent Freddy Morales that the emergency landing took place because the tail rotor suffered a failure which prompted the pilot to land immediately.

RELATED CONTENT: The Fraud Behind the Idea of Fraud in Bolivia’s Election

Minutes before the incident took place, the Bolivian president was inaugurating a road between the towns of Colquiri and Caracollo.

During that ceremony, Morales reiterated his call to defend peace and democracy in the country in the face of the opposition calls for protests and blockades, which have been infiltrated by violent groups.

He also urged the opposition to deliver the alleged evidence of “electoral fraud” to electoral organizations that came to the South American nation to audit the elections of October 20, in which Morales was reelected for a fourth term.

The Air Force confirmed the incident of the president’s helicopter as a result of a tail rotor failure. Evo Morales and the crew of the aircraft were unharmed. The Air Force reported that an investigation is underway.

Our correspondent in Bolivia @FreddyteleSUR reports: “The Air Force confirmed the incident of the president’s helicopter as a result of a tail rotor failure. Evo Morales and the crew of the aircraft were unharmed. The Air Force reported that an investigation is underway.” https://t.co/4perSzcr6i