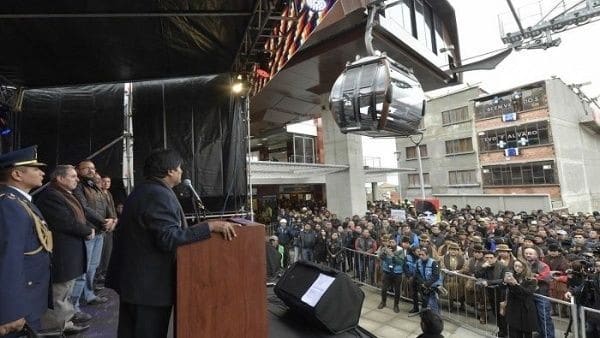 The indigenous leader inaugurated the ninth transportation line of the La Paz cable car that will provide ease to the Bolivian people.

After making the proper inspection of the work, the head of state declared the new route as operational and expressed that his administration is willing to “continue expanding the cable car, because it is a faster transport.

“We have a nice plan thanks to the company Dockweiler with his team, with the technicians, a nice project to expand our cable car in the city of La Paz as well as in the city of El Alto, but we are also planning in other departments,” he said.

The brown line joins the routes already inaugurated, called Yellow, Blue, White, Purple, Orange, Red y Green, Light Blue and it is the shortest of the ones managed by the state company, Mi Teleférico. It is made up of ” 26 cabins, seven towers and two stations, one on Busch Avenue that connects with the White line, and another in Villa San Antonio in this city, its route lasts 3.83 minutes in less than one kilometer and has the capacity to transport three a thousand people per hour. ”

The president also said: “We work integrating the country, we expand the roads in the department of La Paz and we plan construction of an airport in the north of La Paz, we are sure that it will contribute to the agroindustry.” These works are the result of the nationalization of natural resources and strategic companies. “For his part, the executive manager of the company Mi Teleférico, César Dockweiler, said that thanks to the guidelines of President Morales they could accomplish this work that had a scheduled date of operation for the month of February 2019 , and that only seeks to provide ease and benefits to the Bolivian people.

He also announced that the Silver Line has great advances and that it could become operational by March 2019.