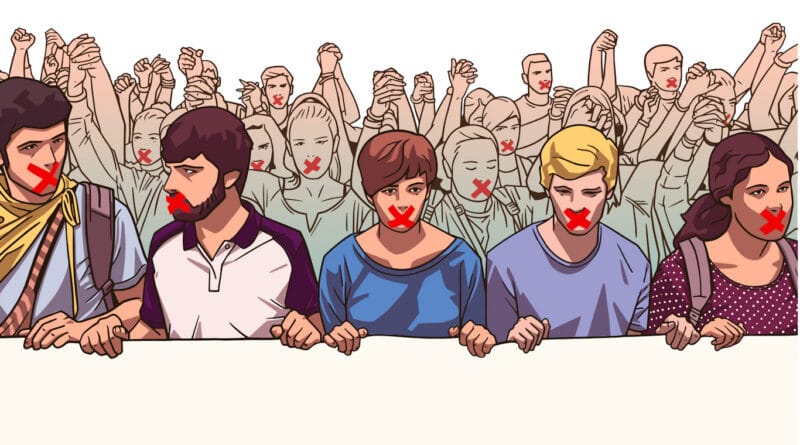 While a debate rages over whether Facebook should view the term ‘Zionist’ as a slur, the ADL continues on its crusade to make the IHRA definition of anti-Semitism the worldwide standard.

The Biden administration is opening a new child prison along the United States-Mexico border. The center, located in Carrizo Springs, around 100 miles southwest of San Antonio, is being specifically built for unaccompanied migrant children attempting to cross the border and will hold around 700 people when finished, although plans noted it will be expanded if the government deems it necessary.

Words are perceived in different ways by different people. That’s the nature of human communication and no matter how widely-adopted our alphabets become or how standardized our dictionaries get, we will never eliminate the personal history that gives context to what we hear and what we say.

This is the fatal flaw in the never-ending efforts by social media companies to mold inviolable definitions for the words we choose to employ when expressing ourselves on their platforms. It places them in the position to please everybody, which we all know is a fool’s errand. On the other hand, establishing rigid meanings can also be used to manipulate the message.

Zionism is one word, in particular, that evokes intense and passionate debate as all ideologies do. But, now the term is coming under scrutiny after an “innocuous” email shed light on Facebook’s response to concerted action by a powerful Jewish rights group that led to new community guidelines curbing so-called “hate speech.”

The leaked email brought attention to a discussion ostensibly taking place inside the multi-billion-dollar company to design its censorship algorithms and moderator criteria according to the wishes of the Anti-Defamation League (ADL); posing the question of whether moderators should interpret the word as a slur against Jewish people, in general, or just Israelis.

A petition began circulating in the wake of the email’s publication in November soliciting Facebook to put a stop to any attempts to moderate the word ‘Zionist’ on its platform, arguing that it “would too easily mischaracterize conversations about Zionists – and by extension, Zionism – as inherently anti-Semitic [sic].”

The petitioners, led by the nonprofit Jewish Voices for Peace (JVP), also point out the inescapable loop that results when we attempt to regulate definitions by ignoring context, highlighting the fact that many white supremacists and Evangelical Christians support Zionism.

According to its website, JVP’s mission revolves around the Israeli-Palestinian conflict and supports “an end to the Israeli occupation of the West Bank, Gaza Strip, and East Jerusalem.” Under the Anti-Semitism Awareness Act, which amended federal civil rights law in the United States by making the IHRA definition of anti-Semitism part of the U.S. code, JVP could be considered an anti-Semitic organization, since it could potentially be accused of de-legitimizing Israel or targeting Israel “only for peace or human rights investigations.”

Reportedly, the ADL had initially opposed the bill and expressed as much to legislators going so far as to arrange “private sit-downs” with Congress members to lay out their case against adopting this definition in questions of civil rights law. However, just a year into his tenure as ADL CEO, Jonathan Greenblatt stepped in and put the kibosh on any objection to the bill.

Fast forward to 2021 and Greenblatt is leading a crusade to have the IHRA definition installed on the most popular social media platform, with which it has already been collaborating closely on several content censorship initiatives.

The Anti-Defamation League (ADL) led a coalition of 1,000 companies to flex their collective muscle and boycott the social media giant’s ad business. “When Mark Zuckerberg said he would allow Holocaust denial on his platform” the ADL determined that it was time to take a more hardball approach to remove what Greenblatt calls “some of the worst elements of society” from the popular website.

Facebook reacted quickly to the July 2020 boycott. A month later, Zuckerberg himself had already made plans to meet with the organizers and announced changes to the site’s community guidelines that, according to him, had been based on “feedback from the civil rights community.” Four days before Facebook caved to their demands, the organizers went in for the kill in a letter asking the social media company to adopt the IHRA definition of anti-Semitism; effectively bringing Facebook into alignment with official state policy.

ADL’s push to force the company to implement the changes to its moderating policies was aided by the histrionics of Sacha Baron Cohen, who has made his name defaming other cultures through films like Borat, comparing Zuckerberg to a “restaurateur gladly serving neo-Nazis”. The associate director of the ADL’s Center for Technology and Society Daniel Kelley, meanwhile, blasted Facebook for “putting revenue above all else” and signaled that as a raison d’être for the boycott.

The hypocrisy may not have been evident to Kelley since he was perhaps unaware of why his boss had actually started on his campaign to make the IHRA definition a part of Facebook moderation policies. According to a former member of the ADL’s Civil Rights Division, Greenblatt’s “stand down” order on the staff members and executives who were advising against the definition’s adoption in 2016 was the result of a donor who “was mad at us.”

Former ADL employees identified the donor as Marc Rowan, a private equity billionaire who had partnered with Senator Harry Reid in 2012 to bring forward a bill to expand the definition of anti-Semitism and, which led directly to the introduction of the Anti-Semitism Awareness bill of 2016.

What’s in a Name

The ADL’s penchant for using civil liberties rhetoric to protect Zionist ideology in the United States is not as well-known as it should be. Since its inception, the Jewish non-governmental organization has engaged in the subversion of black resistance movements in America in order to set the parameters of acceptable critique of the apartheid state and has not shied away from turning public opinion against minority groups to advance the agenda, as it did with the Ilhan Omar anti-Semitism scandal two years ago.

The Facebook “Zionist” debate is yet another chapter in a strategy of polarization, that the organization has employed time and again to sow division where there might be any threat of consensus over the atrocities committed by the Israeli government against the Palestinian people. After all, it doesn’t matter what you call the act of killing a child in front of his home. There is no moderator or algorithm in the world that can hide such deeds.