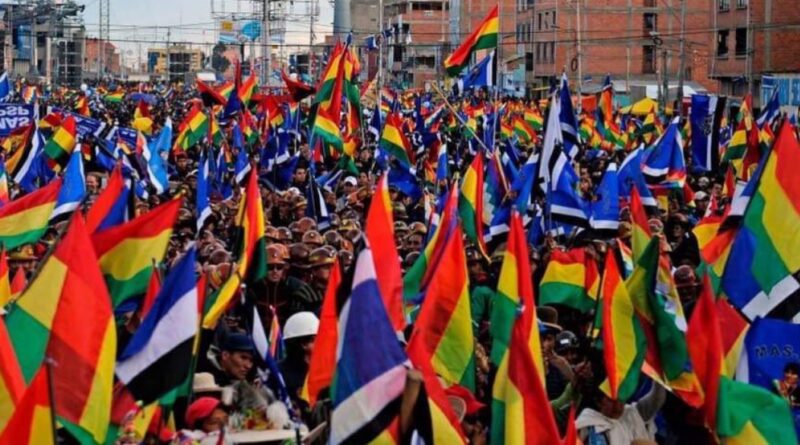 FAR-RIGHT forces linked to Bolivia’s coup regime are considering staging “false flag” bomb scares to incriminate the Movement Towards Socialism (MAS) and annul elections that the party is set to win, documents seen by the Morning Star suggest.

The documents say that bomb threats could target hotels where international observers of the presidential election will be staying.

Information passed to the Star from within Bolivia outlines five scenarios that could be carried out with the aim of preventing the MAS from returning to power in the elections on October 18.

The ballot will take place nearly a year after the country’s last elections, in which MAS leader Evo Morales won a first-round victory but was ordered out of office by the army after right-wing protests.

Sources say that paramilitaries “of nationalist right-wing and ultra-right orientation” have been working for a month to gather information on hotels where international election observers will be staying, including details of how to gain access, so as to be able to place bombs “leaving traces that incriminate the MAS” if given the green light.

“There is more than one indication that ministers … have been sowing conditions for ‘false positives’,” sources say, pointing to how authorities blamed the MAS for bombing telecommunications antennae in El Chapare and Santa Cruz in June and July, and how they accused the party of preparing guerilla actions in August after reporting the police’s seizure of 126,000 .22-calibre firearms in the city of Cochabamba.

Retired military officers are named as having been assigned tasks including placing explosive devices in hotels to be discovered, “launching the deadly news … from three different countries as an investigated fact” and co-ordinating reactions to news of the bomb plots with paramilitary groups in Cochabamba and the cities of Santa Cruz and La Paz.

The aim of the bomb scares would be to “create a mass demand for the suspension or annulment of elections,” allowing another lengthy postponement, this time on the basis that supposed MAS violence prevents the conduct of a free and fair vote.

Promised elections have been delayed twice since November’s military putsch.

This could then lead to a range of reactions, including the closure of the National Legislative Assembly, which retains MAS majorities in both houses, and the installation of an emergency military government.

The possible “false flag” scenario is just one of the contingencies that may be lined up to ensure that the MAS is not returned to government.

The party could be disqualified ahead of the elections by the Supreme Electoral Court, since MAS presidential candidate Luis Arce is accused of breaking electoral rules by commenting on polls during a period when restrictions apply, an accusation the MAS denies. A ruling on this is due next week.

Though sources say that this is the preferred option by both far-right and “liberal-right” forces in Bolivia, “the question is whether the court will dare to cancel the legal status of the MAS when the campaign is already at its most intense.”

However, “the foreseeable reaction of the social movements” in such an event could itself be used to justify right-wing reprisals and further persecution of the MAS and its supporters, sources say.

The regime of President Jeanine Anez has unleashed repeated violence on MAS supporters since Mr Morales was forced from power, including massacres of protesters in the cities of Sacaba and Senkata following the coup.

Other options include mobilisation of right-wing forces to dispute the veracity of the result if the MAS wins in the first round, as happened in October last year.

In this case, the attitude of Carlos Mesa, the former president who came second to Mr Morales last year and whom polls suggest will finish in second place again this year, could be crucial in undermining or reinforcing the credibility of a second coup d’etat.

Bolivia solidarity campaigners said that the threat of a bid to derail or annul this month’s elections was very real.

“These explosive revelations confirm concerns internationally that the coup regime in Bolivia will do everything it can to stop free and fair elections taking place,” a Friends of Bolivia spokesperson told the Star.

“We must stand in solidarity with the MAS and all those fighting for democracy and social justice in Bolivia.”

The OAS’s “completely false” claims that last year’s election of Mr Morales was fraudulent have been labelled “the foundation of the coup” by US economist Mark Weisbrot.

“I firmly believe [Mr Murillo] is getting further instructions from the Trump administration,” Ms Colque told the Star.

“According to the polls, the MAS occupies first place. So the opposition will use, invent or frame them with anything, as they have been doing with MAS members who are currently in jail on trumped-up allegations. They want to ban the MAS.”

Ms Colque said she had long warned of the possibility of “military actions” to stop the socialists returning to power in Bolivia.