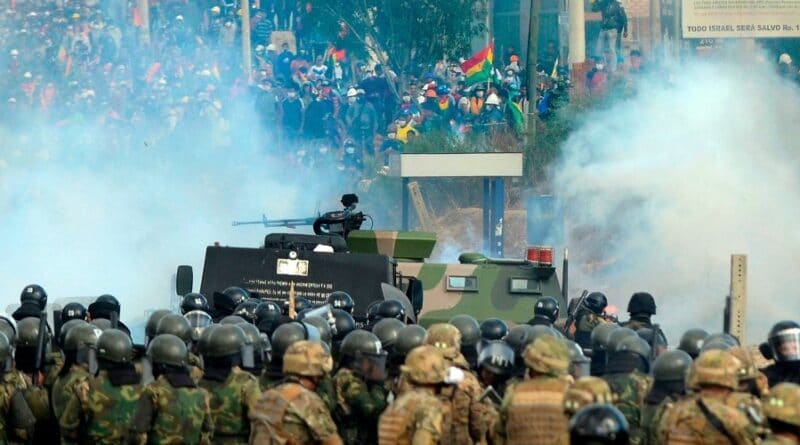 Their letter to the State Department demands “that the United States government take responsibility for what is done with our taxpayer dollars.”

A bicameral group of congressional lawmakers led by Sen. Bernie Sanders on Tuesday sent a letter to Secretary of State Mike Pompeo urging the State Department to pursue a “full, independent review” of the Organization of American States regarding its actions following what Sanders and many progressive observers have called a right-wing coup in Bolivia last year.

The letter’s (pdf) signatories—who include Sanders (I-Vt.), Rep. Jan Schakowsky (D-Ill.), Rep. Deb Haaland (D-N.M.), Rep. Hank Johnson (D-Ga.), and 26 other Democratic members of the House and Senate—wrote they are “deeply concerned with the lack of accountability and transparency regarding the role of the OAS in last year’s election and political crisis in Bolivia.”

RELATED CONTENT: Bolivia’s Socialist VP Candidate: “The Coup Against Evo Morales was Driven by Multinationals and the Organization of American States”

.@SenSanders, @IlhanMN, @AOC, @RashidaTlaib, @RoKhanna, and other lawmakers have sent a letter to @mikepompeo regarding Bolivia's election

“Given that the OAS has been invited to monitor Bolivia’s next elections—scheduled for September 6th and postponed until October 18th—we urge the administration to use its voice at the OAS to advocate for a thorough, independent assessment of the OAS’ statements and reports regarding Bolivia’s 2019 elections,” it continued.

As you are likely aware, the de facto authorities that seized power following Morales’ forced resignation have promoted a racist, anti-indigenous agenda and deployed the military to violently repress protests, resulting in the killing and injury of many civilians. OAS Secretary General Luís Almagro was quick to recognize the unelected president, Jeanine Añez, and has failed to speak out regarding the deterioration of human rights and persecution of political opponents taking place under her rule.

The letter noted that Mexico, backed by other OAS members, called on the organization’s general secretary to authorize an independent probe of the OAS’ analysis of the Bolivian election, as well as an assessment of the human rights violations reportedly caused by erroneous OAS assertions regarding those elections.”

“The U.S. Congress appropriates the majority of the OAS’ budget,” the lawmakers wrote. “We therefore have a responsibility to ensure that American taxpayer dollars are used to support organizations that function transparently and that uphold democratic norms rather than undermine them.”

At least as often as not, the United States has undermined democracy throughout Latin America, from Monroe Doctrine-based interventions going back to the early 19th century to propping up “banana republics” and other dictatorships during the late 19th and early- to mid-20th century to overthrowing or helping to overthrow numerous democratically-elected governments and teaching torture and democracy suppression to dictatorships’ security forces.

Bolivia has been no exception. The U.S. backed the brutal dictatorship of Hugo Banzer—a U.S. Army School of the Americas “Wall of Fame” alumnus best know for sheltering the fugitive Nazi leader Klaus Barbie, the “Butcher of Lyon”—as well as other Bolivian dictators. It also sent elite troops to assist in the assassination of Ernesto “Che” Guevara, and has meddled in the country’s internal affairs through the United States Agency for International Development (USAID) and other government agencies.

“The Organization of American States’ decision last year to declare Bolivia’s election fraudulent on the basis of questionable evidence helped fuel a crisis of democracy and human rights that Bolivians are experiencing to this day,” said Sanders in a statement explaining the lawmakers’ letter. “What more than two dozen of my colleagues and I are demanding is that the United States government take responsibility for what is done with our taxpayer dollars and wield oversight over the OAS.”

“Securing accountability and transparency from the OAS is vital to a free and fair election in Bolivia next month,” Sanders added.

Featured image: Bolivian riot police and soldiers confront supporters of Bolivia’s ex-President Evo Morales during a protest against the interim government in Sacaba, Chapare province, Cochabamba department on November 15, 2019. The police later opened fire on the demonstrators, killing at least five people and injuring many others. (Photo: STR/AFP via Getty Images)