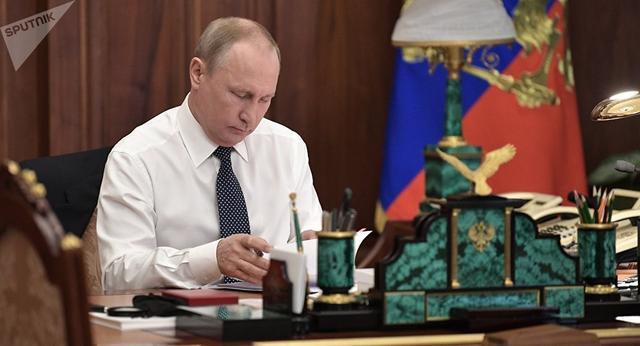 The New York Times released sequel six in the best-selling Putin-the-Poisoner series on September 22. The incredibly gifted junior G-men and women in the Times Tower have sleuthed yet another episode of boundless evildoing by the arch-villain Vladimir Vladimirovich Putin.

“The editorial board,” we are informed, “is a group of opinion journalists whose views are informed by expertise, research, debate and certain longstanding values” (emphasis added). In this blue state special, they spin the tale of Russian dissident Alexei Navalny poisoned with “a nerve agent developed by the Soviet Union.” Jacobin calls Navalny, who is a right-wing anti-immigrant blogger and YouTube celebrity, “Russia’s Trump.”

From the “established fact” that a poisoning occurred, the rest of the Times editorial is pure conjecture. After the poisoning and spending two days in a Russian hospital, the victim flew off to Germany. The people described by the Times as “Mr. Navalny’s colleagues” returned to the crime scene, a hotel in that most ominous of places, Siberia. The perpetrators of the crime were sloppy in covering up because “traces of [the poison] Novichok were found on a water bottle” at the hotel, according to the Times.

This clearly demonstrates not only malevolent intent by the culprits but also the abject failure of Russian hotels to achieve room service to international standards of cleanliness. Likewise, the Russian police were too incompetent to seal off the crime scene for investigation.

In a chain of custody not revealed, the “colleagues” sent the “evidence” out of Russia to Germany then also to France and Sweden, where it was subsequently “confirmed by laboratories.” “The powerful poison,” we are told is used “against foes of the Russian regime.”

Only in the cartoonish mindset of the NYT do the perpetually bungling villains leave such blatant clues to their crimes.

The editorial board declares, “many questions remain unanswered and are likely to remain so. Chief among them is whether President Vladimir Putin ordered or approved the attempted assassination.” Later in the editorial, this chief question is answered: “Mr. Putin knows what happened, or he can find out,” but “…he continues to hide behind glaringly phony denials.”

The NYT gumshoes have discovered a pattern: “Then there is the fact that once again, the victim survived the attack.” In fact, this is the sixth such incident of survival in a row. Not only have the wrongdoers used a chemical agent that can be traced back to them and they allowed both the victim and the damning evidence to leave Russia, but they repeatedly administered the poison in precisely the correct sub-lethal dose to induce a near death experience to their victims.

How can this be? The NYT detectives rhetorically state: “Or was it their intention to convey a brutal warning of what happens to those who challenge the Kremlin?”

As in any crime mystery, the motive must be established. For the Times, it is clear: “the attack could be seen only as an attempt to silence a strong and effective political voice.” The Times then calls for increased sanctions against Russia. They argue that Putin must not be allowed to get away with bad behavior.

Harkening back to the Russiagate playbook of Trump being Putin’s puppet, the Times ingenuously asserts, “President Trump, for reasons that remain one of the top mysteries of his administration, has largely closed his eyes to Mr. Putin’s serial transgressions.” The Times admonishes: “it is incumbent on the West to hold him accountable for murdering or trying to murder anyone he finds troublesome.”

Note, the Times segues from conjecturing that Putin is the perpetrator to – based on no evidence – that he has in fact attempted murder.

Outside the comic book world that the editorial paints, there are questions not addressed by the Times. Why, after five previous incidents, has the Russian security state not learned to administer fatal doses of poison and cover up their tracks? Why would Putin repeatedly order hits on dissidents that every time boomerang on him by publicizing their grievances and inviting punishing sanctions?

An alternative explanation for this poisoning story is that this is a setup to discredit and weaken an official enemy of the US imperial state. The nation’s newspaper of record has a long history as a faithful mouthpiece of empire. On spinning the Putin-the-Poisoner tale, the Times has been but one voice in the Russo-phobic chorus of western media.

The truth of the Navalny case is hard to ascertain. What is clear is that the “evidence” that the Times touts has not been made public but has been used to bludgeon Russia.

Putin is not up for election. But there is something else at stake and that is, as the Times editorial mentions, the possible “cancellation of the Nord Stream 2 pipeline, a gas conduit from Russia to Germany,” which is of vital economic interest to Russia. The US, now the world’s leading producer of fossil fuels, opposes the project. In a bipartisan effort, the US even threatens “crushing legal and economic [secondary] sanctions” on the German seaport of Sassnitz for supplying the project.

The Times laments, “Angela Merkel, the chancellor of Germany, is reluctant to take a step” to cancel this “nearly completed” project despite the US having “demanded cancellation of the pipeline.” It is not inconceivable that the Navalny scandal was manufactured to tip the scales and sabotage the Russian project.

Roger D. Harris is with the Task Force on the Americas, a human rights group working in solidarity with the social justice movements in Latin America and the Caribbean since 1985.