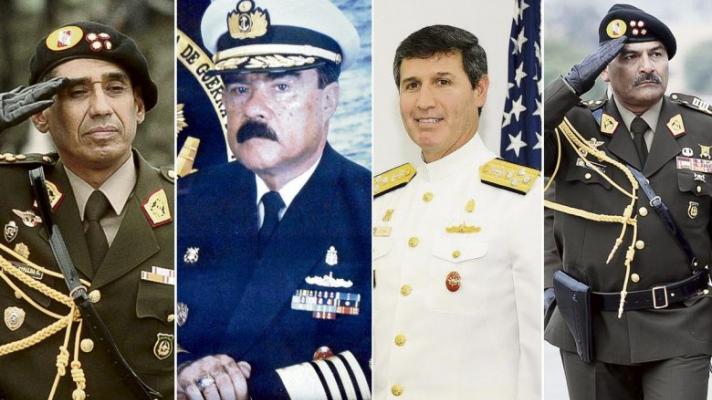 Retired senior commanders of the Peruvian Army, Navy and Air Force, in addition to junior officers, sent a letter to the Joint Command of the Armed Forces (CCFA) in which they claim that there is an alleged “electoral fraud,” and that if Pedro Castillo is proclaimed the winner of the presidential election, the military institutes would not recognize him.

The letter, which cites incorrect information and unverified data, will not be answered by either the CCFA, nor by the general commanders of the military institutes, to whom the written communication was also sent, sources from the Ministry of Defense reported.

The Ministry has refused to respond to the letter because it has detected that at least four of the signatories are deceased persons: retired Peruvian Army colonels Luis de la Cruz Centellas and Walter Núñez Carbajal, Captain Alejandro Muñante Salazar and Commander Carlos Mascaró Solís. The Republic verified in the identity records of the aforementioned officers that they have indeed died. For this reason, the Ministry of Defense considers the letter to be of doubtful origin.

Among those who signed the letter are four retired generals of Army divisions, 17 retired vice admirals, and 27 retired lieutenant generals of the Navy. Several served during the Alberto Fujimori regime and were involved in notorious corruption cases, such as the Police Military Pension Fund and the purchase of war equipment.

RELATED CONTENT: Peru at the Brink of Civil War? The Uprising of the Dispossessed

Without providing any proof, and only referring to the Fujimori press campaign, the signatories attribute to the National Office of Electoral Processes (ONPE) and the National Elections Jury (JNE) a supposed conspiracy to ignore allegations of irregularities in the second round, for which “an illegal and illegitimate president” would be proclaimed, they claim, in reference to Pedro Castillo.

They invented a fraud
“We believe that the Armed Forces would not be able to accept an illegitimately proclaimed supreme leader as a result of fraud,” the ex-military men pointed out in the letter, without providing any evidence supporting their claim. So far, neither the ONPE nor the JNE have detected any proof of electoral fraud in the second round of the presidential election in Peru, held on June 6.

In one of the most questionable aspects of the letter, the signatories demand the intervention “of the highest commanders of the military” so that they can prevent “the highest authority of the country from being designated illegally and illegitimately as a consequence of a crime [the alleged fraud].”

In addition, they even insist that the military institutes “would have the right to non-obedience and therefore to ignore as president and supreme head of the Armed Forces a person who has been appointed in violation of the Constitution.”

The signatories do not provide evidence in support of their statements; they simply repeat the falsehoods that are circulating on social media and reproduce the reports of the media that support Keiko Fujimori and her claims of alleged electoral fraud.

“It is unacceptable that these ex-military people think they can address the nation,” denounced constitution expert Walter Albán. ”This confirms what some had suspected and I am now inclined to believe it. We are in a situation where there is a strategy that seeks to create an environment of anxiety to incite provocation. This is in line with what is happening in the streets, with mobilizations, harangues and sit-ins.”

Albán, interpreting the content of the letter from the retired officers, considered that the signatories may be involved in a conspiracy to commit a rebellion.

“What this group of retired officers is doing is that they are urging the commanders of the Armed Forces and the head of the Joint Command of the Armed Forces not to recognize the next president to be proclaimed, in the event this announcement is made, and the bogus complaints by Keiko Fujimori over the second electoral round get dismissed,” explained another constitution expert, Omar Cairo.

“The Armed Forces do not have the right to determine whether the procedure carried out by the National Elections Jury is valid or not,” continued Cairo. ”There are mechanisms to question them in the legal system, and none of those mechanisms consists of the Armed Forces examining and deciding whether the resolutions issued by the National Elections Jury are valid or not. Neither can the Armed Forces denyrefuse to recognize a president, claiming that the complaints filed in the second round of the election have not been dismissed. It appears that we are facing an instigation to commit the crime of rebellion.”

About 400 retired officers from the Army, 600 from the Navy and 300 from the Air Force have reportedly signed the letter.