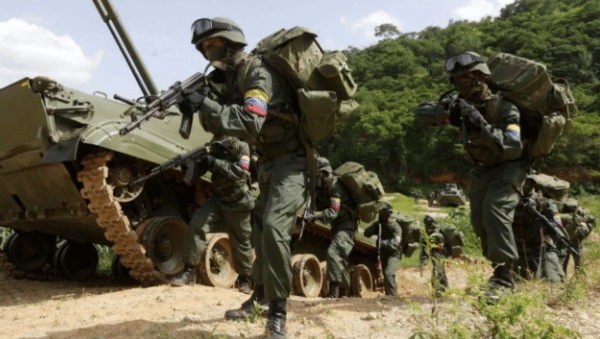 Venezuelan Minister for Defense, General-in-Chief Vladimir Padrino López emphasized this Sunday, September 20, that the Bolivarian National Armed Force (FANB) will be firm in the fight against armed groups that intend to use the national territory for drug trafficking and other cross-border crimes.

“The FANB will not rest in combating any armed group that tries to use our sacred territory for drug trafficking and other cross-border crimes, trying to disturb the national peace, especially those that come from the degenerate process of violence that Colombia is experiencing,” said the head of the military portfolio via Twitter.

The words by the head of the defense portfolio were issued regarding the operation “Bolivarian Shield 2020 — Centauro de los Llanos” in which this Saturday, September 19, three camps located in the Tres Esquinas, Mata de Bambú and Las Palmitas sectors were dismantled at the José Antonio Páez municipality in Apure state bordering Colombia.

According to an official statement from the Ministry of Defense, “structured organized crime groups that were dedicated to kidnapping, extortion, drug trafficking, among other crimes,” operated in the place.

This incident occurs while the Venezuelan security forces are in state of alert due to US-Colombian military drills happening at a short range and with US secretary of state, Mike Pompeo visiting Guyana, Colombia and Brazil in what seems to be an electoral diplomatic maneuver but can also be the overture for a coming military operation against Venezuela.

“I express my condolences to the families of the combatants who have raised their souls in compliance with their national duty, and we commit ourselves so that these losses do not go unpunished. President Nicolás Maduro has ordered us to go after them without contemplation wherever they are,” said Padrino López.

Military units located in the region are deployed and carry out monitoring and persecution of other members of the criminal gang, the press release reported.

Many paramilitary groups from Colombia operating on the Venezuelan border are connected with the highest ranks in the Colombian government analysts agree, warning that this might be a drill operation connected to US military plans against Venezuela