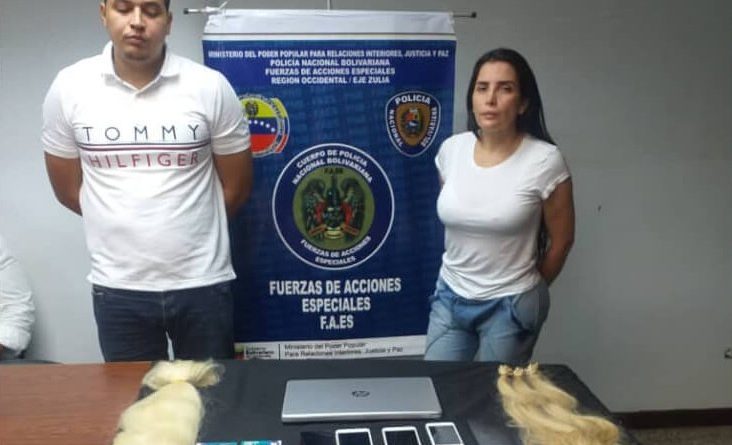 Parliamentarian Aida Merlano, sentenced to 15 years in jail for “buying votes”, escaped 4 months ago on a motorcycle after using a rope to descend from a third floor, in October last year, after she was given permission to attend an orthodontic appointment. In a brief statement, the House of Nariño said that it will not request the extradition of Aída Merlano from the government of the Venezuelan President Maduro (that captured her), but what they call “the legitimate government of Venezuela, headed by Juan Guaidó”, which sparked angry opinions among Colombians.

The director of the Special Actions Forces (FAES) of Venezuela, Miguel Domínguez, reported Monday on the arrest of former Colombian senator Aída Merlano, who had been a fugitive from Colombian justice since October last year.

The parliamentarian with an Interpol’s Red Code was detained in the El Milagro sector, in the city of Maracaibo, capital of Zulia state, “after arduous investigation,” Domínguez explained on his social networks.

The official said that Merlano had entered Venezuela illegally, in the company of another undocumented Colombian citizen: “both were transferred and placed in the custody of the Public Ministry.”

RELATED CONTENT: The People of Colombia are Cracking the Walls of War and Authoritarism

In the early hours of Tuesday, the Ministry of Justice of Colombia announced through its Twitter account that the Colombian government “does not recognize and therefore has no diplomatic relations” with what they qualify as “the dictatorial regime of Nicolás Maduro”, so that “when the competent judge requests the extradition of Mrs. Aída Merlano, the National Government will make the request before the legitimate government of Venezuela, headed by Juan Guaidó.”

The decision of the government of Iván Duque, to request the extradition of Merlano from the alleged “legitimate president” of Venezuela, Juan Guaidó, sparked a wave of comments on the decision.

“Aida Merlano will end up free by the diplomatic stupidity of Duque. In the end Char, Gerlein and Duque do not want Aida in the hands of justice. She knows too much,” the Colombian Liberal politician, Gustavo Petro posted on his twitter account.

RELATED CONTENT: Guaido Confirmed he is in Colombia in Violation of Travel Ban

In October of last year, Colombian authorities reported on the escape of the former congresswoman – sentenced to 15 years in jail for illegally buying votes for the 2018 parliamentary elections – during an orthodontic appointment at a medical center in Bogotá.

The National Penitentiary and Prison Institute (Inpec), disseminated a video of the moment in which the former congresswoman escapes through a window of that secure precinct with the help of a rope, and flees from the place, and escapes on a motorcycle.

Days after the escape, the authorities proceeded to arrest Merlano’s daughter, Aída Victoria, the dentist who attended her, and the captain of the Penitentiary and Prison Institute of Colombia, David Alexader Álvarez Cárdenas, who were later released.

However, the act resulted in the dismissal of the director of the Inpec, General William Ernesto Ruiz Garzón, as well as the director and deputy director of the El Buen Pastor prison in Bogotá (where Merlano was held), Diana Muñoz and Katerin Lozano, respectively, by order of the Minister of Justice, Margarita Cabello.

For his part, the president of Colombia, Iván Duque, promised more than four months ago that they would apprehend her again, while the then Foreign Minister Carlos Holmes Trujillo, current Minister of Defense, said they would declare a “maximum alert” on the border to avoid Merlano leaving Colombian territory.