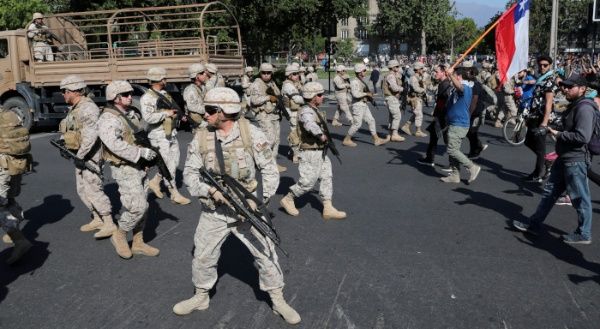 After the curfew was lifted, thousands of people began to leave their homes to start their daily activities, but transportation is limited.

Miners and dockers’ unions in Chile called for a general strike in support of the protests against the government of President Sebastián Piñera, while the head of the National Defense, Javier Iturriaga, said Monday that he is not at war with anyone.

“The truth is that I am not at war with anyone,” General Iturriaga said when asked about the latest statements by the president, who said Sunday he was “at war against a powerful enemy.”

On Sunday night, Piñera offered statements trying to criminalize the protests and divert attention from the real causes of the demonstrations, while the protests are radicalized and generalized throughout the country, without a glimpse of a short-term solution.

On the other hand, after the end of the curfew, thousands of people began to leave their homes to start their daily activities, on a Monday that is expected to be substantially more complex.

This Monday there is a reduction in public transport options to the detriment of those who go to their jobs despite the state of emergency and the call for a strike.

Iturriaga, in charge of security in the Metropolitan Region since the state of emergency was decreed, which enabled the use of the Armed Forces to control the violence that arose in Chile in the framework of a citizen protest against inequality, highlighted that Santiago woke up calmly.

“It has been a slow awakening of the city, in calm, in peace, which makes us very calm but at the same time we are very alert to solve any inconvenience that some misfits could cause,” said Iturriaga.

From the early hours of the morning, large groups of people could be seen waiting for the opening of some metro stations and stationed at the bus stops.

The militarization of the country has been increasing to try to control the violent excesses that led to the radicalization of the citizen protest against the rise in the price of the subway since last Friday.

On the other hand, in a statement released the day before, the workers of the largest private mining company in the country called to ‘paralyze all the mining in Chile along with other productive sectors’.

“We are going on a general strike until we break down the state of Emergency, take the military out of the streets, defeat the Piñera government and achieve each of the demands of the working people, popular sectors, youth, pensioners and women!” said the call.

The document clarifies that the protests are not due to higher transport prices, because that was only the trigger for this explosion because of the injustices that we experience every day.

Meanwhile, the workers of the Port Stowagers Union of Valparaíso issued a statement expressing their total repudiation of the measures decreed by Piñera, and support for the mass social protests.

They also announced that the Port Union will determine if it calls for national strike, through voting.

Featured image: The militarization of the country has been increasing to try to control the protests that began last Friday. | Photo: Reuters