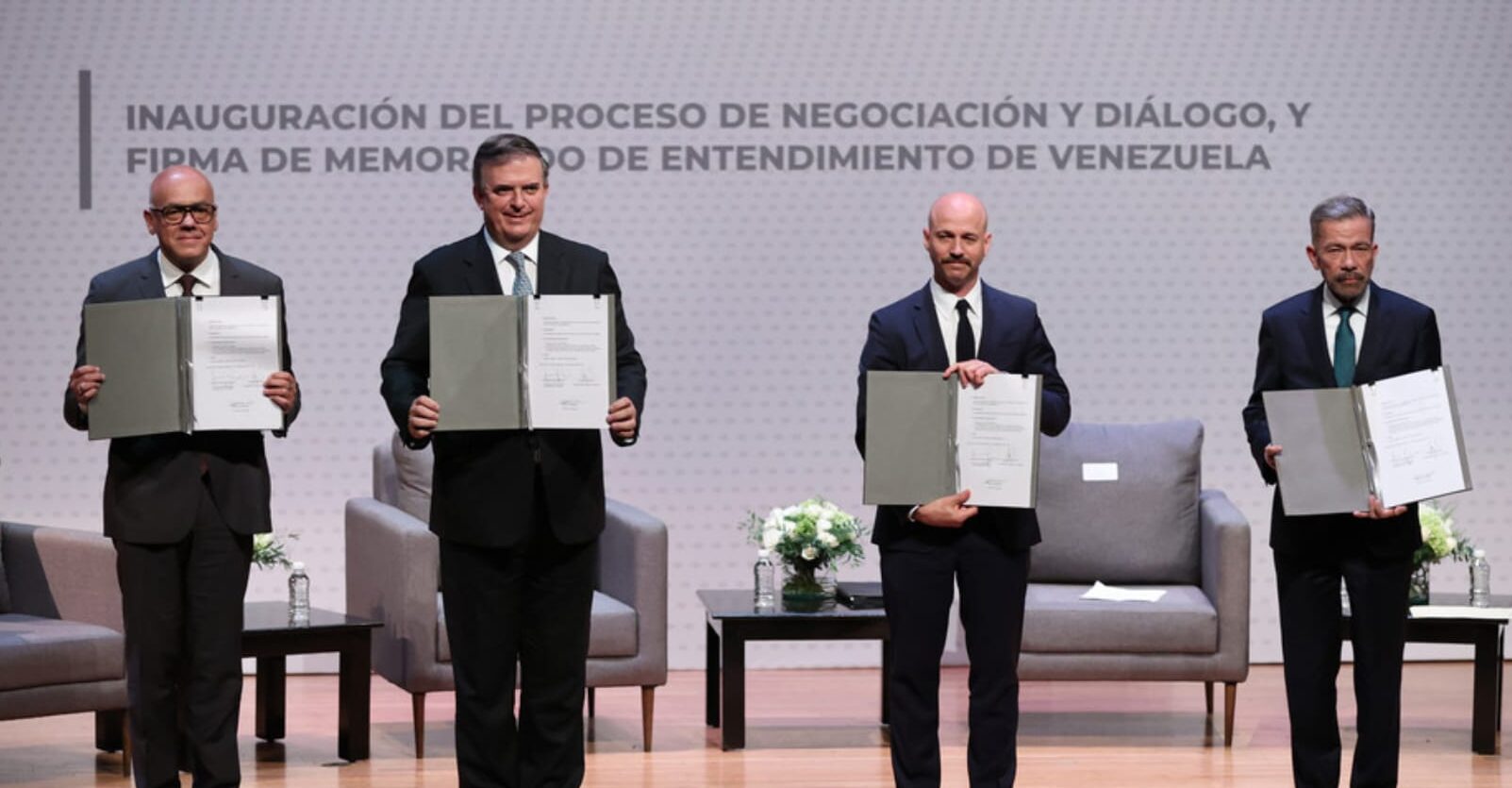 Representatives of the government and the far-right opposition of Venezuela during the launch of the Mexico Talks, August 13, 2021. Photo: Hector Vivas/Gettyimages.ru.

The representatives of the government of Venezuela and the far-right opposition sector Unitary Platform will meet again in Mexico to formally resume the talks suspended last year.

The president of the Venezuelan National Assembly and chief government negotiator, Jorge Rodríguez, published a statement declaring that the objective of this new meeting is to sign the “Second Partial Agreement for the Protection of the Venezuelan People,” which has already been discussed exhaustively in Venezuela.

According to the text, this agreement contemplates the “recovery of legitimate resources, property of the Venezuelan State, which remain blocked in the international financial system.”

“This agreement thus expresses the advancement of the right of our people to enjoy their illegally and unjustly blocked assets and resources, placing social needs at the center of attention of the National Dialogue,” emphasized Rodríguez.

The statement of the government delegation also reiterated its firm rejection of the illegal incarceration of Venezuelan diplomat Alex Saab, and demanded his immediate release and full incorporation as a member of the delegation of the Venezuelan government. It also applauded the incorporation of human rights defender Camila Fabri de Saab to the delegation. Fabri is the wife of Ambassador Alex Saab, and she is also the main voice in the #FreeAlexSaab international campaign denouncing the arbitrary detention and human rights violations against the Venezuelan diplomat.

Venezuela Open to Dialogue With ‘Whomever, Whenever’—Dates for Talks with Opposition Confirmed

Destination of illegally seized resources
According to the Venezuelan government statement, the agreement focuses on “a practical mechanism” to alleviate the complex situation in Venezuela caused by the freezing of State resources abroad.

Rodríguez explained that the resources recovered will be used to reinforce the public healthcare system, including the recovery of infrastructure, equipment, and provision of supplies, vaccines and medicines.

The resources will also be used to expand and reinforce the electric grid, attention to a significant part of the school infrastructure, assistance to needs originating from the recent floods and landslides, and food support programs.

The Unitary Platform also issued a statement stating that its goal is to ensure that the results of the process “translate into concrete actions that help solve the needs of all Venezuelans.”

“There will be no real way out of the crisis without a comprehensive political agreement that provides solutions for our people,” the opposition platform highlighted in its statement, without mentioning that the crisis they refer to is mostly the result of their own actions and the illegal US and European blockade of Venezuela.

Mexico Talks
Negotiations between the government and the far-right opposition began in August 2021 in Mexico, with the mediation of Norway and the Russian Federation. In the first round, the parties signed a memorandum of understanding to reaffirm their willingness to dialogue.

Daniel Ortega: ‘What We Are Faced With Is a Gang of Assassins Who Control the Global Economy…’ (Transcript)

However, two months later the talks were interrupted due to the illegal extraction of the Venezuelan diplomat, Alex Saab, from Cape Verde to the United States. The government of Venezuela demanded the immediate release of the diplomat, an issue that still remains pending despite the resumption of negotiations and the incorporation of Saab’s wife to the negotiation team.

The resumption of the dialogue occurs after a round of prior talks between the parties held weeks ago in Paris, which was attended by the presidents of Colombia, Gustavo Petro; France, Emmanuel Macron; Argentina, Alberto Fernández; and Norwegian Chancellor Anniken Huitfeldt.

Support from the international community
The United States and its allies have shown their support for the resumption of talks. The high representative of the European Union (EU) for Foreign Policy, Josep Borrell, expressed his satisfaction with this process and said that it is “key to a peaceful solution to the crisis,” without mentioning that the EU is a belligerent actor in support of Venezuela’s far-right groups.

“Millions of Venezuelans await an agreement that responds to their democratic and socio-economic aspirations,” Borrell said.

The president of Mexico, Andrés Manuel López Obrador, also spoke in favor of the resumption of the dialogue and thanked the parties for their confidence in the facilitating and guarantor countries.

“The idea is that we would not act in a leading role, we want there to be an understanding so that progress can be made in achieving peace and tranquility,” said the Mexican president.

Norway, which participates as a guarantor and promoter of the negotiations, confirmed the resumption of talks in Mexico, and announced that the parties will meet on Saturday, November 26, with the preliminary objective of signing “a partial agreement on social matters.”

The president of Colombia , Gustavo Petro, who has also been part of this process and proposed some points to “revitalize” the talks, announced on Wednesday that the talks would take place this weekend.