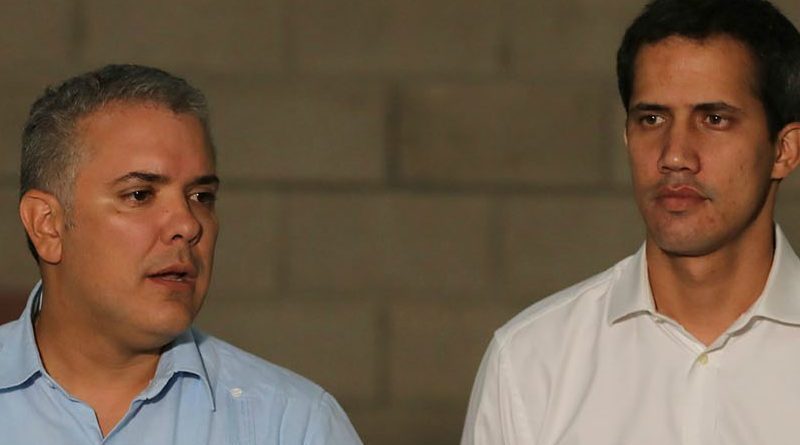 Parliamentarian Juan Guaidó spoke Friday with Colombian president Iván Duque to tell him that he will face the Revolutionary Armed Forces of Colombia (FARC), in conjunction with the neo-Granada government.

Through his Twitter account, Guaidó, president of the National Assembly, said later that the person responsible for coordinating everything will be Julio Borges, a member of the Justice First opposition party. The statement by the deputy comes after a faction of the FARC decided to return to arms and set aside the peace agreement signed in Havana, Cuba, in 2016.

RELATED CONTENT: Venezuela: US is Killing Any Dialog to Maintain a Total Blockade

Following this statement, Twitter users expressed their opinion on the matter: “You are also waiting for Guaidó to take out the FARC from Venezuela,” said a Colombian user on the network.

“They compete strongly for the gold deception prize 2019: 1. Juan Guaidó; 2. The FARC and its “peace” process, when leaving the closet,” said @consejocomunal.

Other users wrote: “Jajajajaja, the sub-president @IvanDuque asks the uterine president @jguaidó for help to end the dissent of the FARC and the ELN. Country of Barbarians ”.

Meanwhile, @Adriana_Lopezh concluded: “I want to understand how Iván Duque says that the FARC is hiding in the narco dictatorship of Nicolás Maduro, but at the same time he says that Juan Guaidó is the president of Venezuela. Are there two presidents? Is there a dictator and president? Is the president Maduro? Maduro is president and dictator? Who is Guaidó?