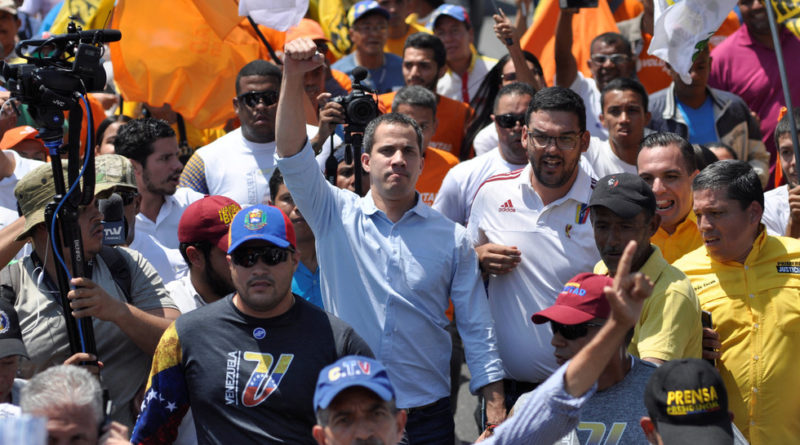 Venezuelan opposition deputy Juan Guaido has accused the government of trying to murder him, after a masked gunman was photographed at his -not very well attended- rally and motorcycle-riding attackers reportedly shot at his motorcade.

“The Venezuelan regime change figure is know for his connections with Colombian paramilitary groups and authorities (kind of redundant we know) and they have international recognition for false flag operations (falsos positivos) and it immediately came to mind when we read from AP news agency, first circulating the photo of the alleged security breach, that the image was given to them by Guaido’s team,” a political analyst said to OT.

The alleged incident took place at an opposition rally in the city of Barquisimeto in Venezuela’s northwestern Lara state on Saturday. Though no videos of the confrontation are available, a few photos from the scene were provided to the media by Guaido’s team. They show an unidentified dark-clad man in a helmet pointing a gun toward a group of opposition activists and politicians, including Guaido. The gunman’s face was covered with a cloth.

Since December 2019, Guaido lost his leadership among the anti-Chavista bench in the Venezuelan National Assembly, leading to him loosing his seat as president of that state power, all this connected with corruption scandals and differences among right wing forces on the handling of international financial resources, since then his traction as opposition “leader” has melt down.

The city’s former mayor and Guaido supporter Alfredo Ramos told AFP that the protesters numbered about 200 pro-government activists and security personnel, but the masked gunman did not fire his weapon then. Guaido’s team said a 16-year-old protester sustained a gunshot wound in the leg sometime later, but again no video was seen in a highly monitored event .

In a separate incident, attackers on motorbikes reportedly shot at Guaido’s motorcade and pelted it with stones. His team shared a photo of a vehicle with a damaged rear windshield, but again no video or witnesses.

Guaido quickly accused President Nicolas Maduro’s government of making an attempt on his life. “The cowardly dictatorship has tried to assassinate me. Our car has more than nine bullet holes,” the politician said. Speaking to newspaper El Pitazo, Ramos alleged that the attack was coordinated by local officials and the government’s security forces. The Maduro government did not comment on these claims.

Earlier this month, government supporters kicked and threw traffic cones at Guaido’s car outside Caracas Airport after he returned from a trip overseas. The politician was also doused with water during the scuffles that day.

Venezuela’s twitter activists, always very active, started analyzing all available evidence immediately after detecting the media operation. Orlenys Ortiz (OrlenysOV) presented one analysis: “Guaidó was shot at during the march, but they don’t show a single video. He was targeted but nobody runs. There is a 16-year-old kid shot and wounded,” but they don’t show the wound and the bloodshed, only a bandaged leg. Guaido called to the wounded, but he don’t even put him on speaker,” she tweeted.

Luigino Bracci, another active Chavista in social networks tweeted: I reiterate, what happened today in Barquisimeto has to be thoroughly investigated, and whoever is responsible for the violence must be detained, regardless of whether they were supposed “Chavistas” or Guaidó people themselves, or someone sent by a third party.

“Guaido desperately needs something to pull up his approval numbers to be able to mobilize some Venezuelans as he did in the first quarter of 2019. The impunity around Guaido’s crimes, the sense of lack of justice for all his crimes, the rage among many Venezuelans suffering because of his repeated calls for sanctions and US invasion among the interest of extremist radicals from anti-Chavismo that may believe they will benefit from a violent incident around Guaido, might create a dangerous cocktail that is not going to benefit anyone, so I believe Venezuelan justice should act fast to start putting things in order,” said OT’s editor, Jesus Rodriguez-Espinoza.

Telesur Journalist Camila Escalante (@camilapress) called attention to the fact that the gunman image AP viralized was provided to them by Guaido’s team.

Venezuela's opposition is claiming that a Chavista opened fire on Guaido's rally in Barquisimeto today. They even sent a photo of a masked 'colectivo' to AP and other outlets yet despite the crowd of iPhone 11s, very little else was captured. https://t.co/1vniXzCQiE pic.twitter.com/xHXwP6Z5VX

Another twitter activist, Aura Cedeno (@auracedenos) presented a series of photos with captions on the gunman incident that make it hard to believe that the incident was not staged.