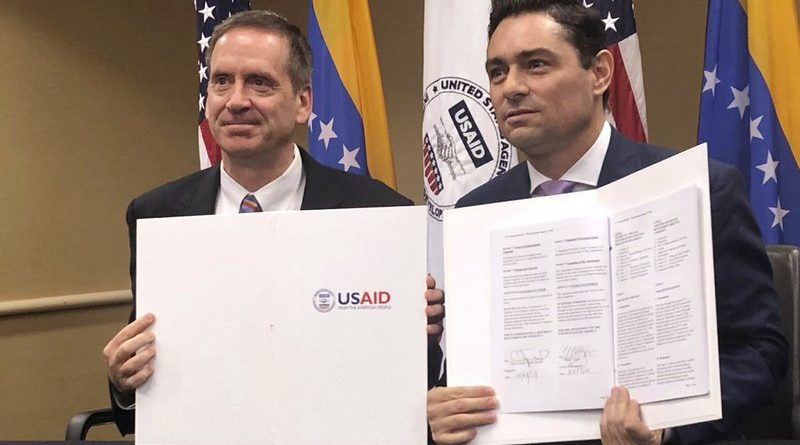 The 98-million dollar deal signed in Washington will go towards medium- and long-term projects involving non-governmental organizations as well as to the opposition-controlled National Assembly, but no further details were disclosed.

Self-proclaimed “Interim President” Juan Guaido said the US funds would help his team’s work both inside and outside Venezuela.

The Trump administration had pledged US $52 million in September, and had diverted $40 million of Central America aid to fund the Venezuelan opposition. It is not clear at the present time whether the $98 million comprises the previously pledged sums, or if it represents a new disbursement.

Guaido proclaimed himself “interim president” in January and was swiftly recognized by Washington and regional allies. He has since led several unsuccessful efforts to oust the Maduro government, including a failed military putsch on April 30.

For its part, the US Treasury Department has imposed successive rounds of crippling sanctions against the Caribbean nation, most recently a trade embargo in August which has been likened to sanctions regimes imposed on Cuba, Iran, and the DPRK. Norway-mediated dialogue between the government and the opposition broke down in the wake of August’s embargo.

The USAID agreement follows a decision by US software giant Adobe to suspend services to Venezuelan clients, citing US sanctions.

“To remain compliant with this [Executive Order 13884], Adobe is deactivating all accounts in Venezuela,” the company published on its website on Monday, adding that no refunds will be issued.

Venezuelan users of programs such as Photoshop, InDesign and Premiere now have until October 28 to download any stored content before their accounts are deactivated. A growing number of freelance and outsourced workers are now forced to look for alternatives to Adobe products.

Adobe is not the only transnational firm shut down its activities in Venezuela for fear of breaching US sanctions. Most recently, British financial services company TransferWise likewise announced it was no longer providing services to Venezuelan customers. Users reportedly received a message saying services would be terminated on October 21.

Venezuelans rely on services such as TransferWise or PayPal to receive payments or remittances in foreign currency.

Last month, Mastercard cut off ties with a bank belonging to the Venezuelan armed forces, while Verizon blocked the internal platform at the Simon Rodriguez Experimental University.