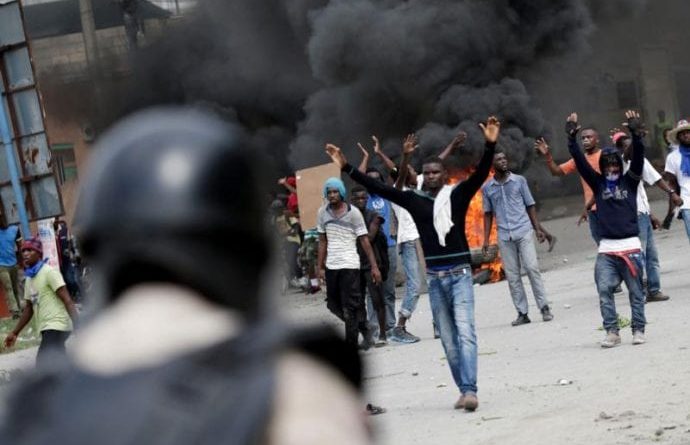 As Port-au-Prince began its fourth week of paralysis due to serious social unrest, the Haitian bishops’ justice and peace commission called on President Jovenel Moise to step down.

Going a step further than the bishops, who squarely laid the blame for the current chaos on the present government and elected officials in late September, the justice and peace commission said, “A change in head of state is crucial as is a change in the way the authorities govern the country.”

Haitian leaders, it said, are “digging the people into a deeper ditch with no way out. They are the ones responsible for all the bad steps that the country is taking.”

This government, the commission said, “lacks the will, the competency and the capacity to take the necessary decisions to respond to the needs of the people.”

Haiti has been embroiled in a deepening crisis as a movement to demand accountability for government corruption scandals has turned into a broad popular insurrection to oust the president and put an end to endemic waste and embezzlement of state funds.

Throughout 2018, a movement known as the Petro Challengers was launched when a few citizens started asking what happened to some $4 billion generated by the sale of oil loaned by Venezuela after the 2010 earthquake. When government auditors pointed a finger at a string of government officials, including Moise, the Petro Challengers erupted into a broad citizens’ movement that took to the streets.

A further citizens’ social media campaign produced a popular video to question the costs of running the Parliament. It showed that each of the country’s 119 congressmen costs the state more than $326,000 per year, and each of the 30 senators cost $1.3 million, dwarfing state funds allocated for health or education.

In September, a pro-government senator said colleagues were offered $100,000 to vote to ratify the president’s latest choice of prime minister and added that this was normal practice. This further fanned the flames of citizens’ fury against their government.

On Oct. 7, sporadic demonstrations continued in the streets of Port-au-Prince, often put down by heavily armed police SWAT units; most Haitians remained at home for fear of violence. Some ventured out to search for gas, which was scarce, as the government’s failure to pay fuel bills has gas suppliers reluctant to deliver to Haiti. Schools remained closed, and hospitals were barely able to function, for lack of electricity or gas to supply generators. Demonstrators blocked roads to stop traffic circulating. A ceremony to mark the opening of the judicial year Oct. 7 was canceled, as demonstrators threatened to stop the activity.

Haitian Americans to Pelosi: “Stop US meddling, is time for Jovenel Moise to go”

A meeting in Miami between U.S. House Speaker Nancy Pelosi and some of South Florida’s most prominent Haitian Americans ended Thursday with a message for the Democratic leader to take back to Washington: The U.S. needs to stop meddling in Haiti’s internal affairs — and Haiti President Jovenel Moïse needs to go.

“The people of Haiti are saying, ‘My goodness, let us govern ourselves. Let us find our own path… just support us,’” said Gepsie Metellus, the executive director of Sant La Haitian Neighborhood Center, which provides social services to the community. “What do people want to see? They want to see the United States ask, ‘What do you want and how can we help you get it?’ We don’t want the United States or Canada or France or the rest of our friends dictating. We don’t want to be dictated to.”

“The people of Haiti say, ‘No interference. No [Temporary Protected Status] deportations after Jan. 20, no more support of President Jovenel Moïse as president of Haiti.”