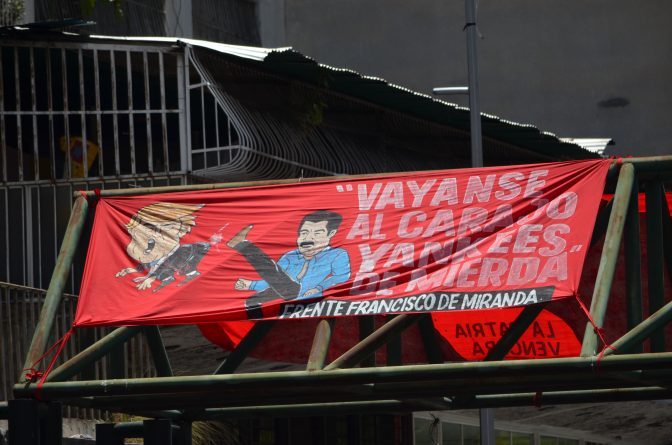 International News Security and Defense
May 1, 2019May 1, 2019 orinocotribune coup d’etat, failing coup, Trump not knowing what to do, US Imperialism

Earlier today Venezuela and the world was awakened to news of Juan Guaido and Leopoldo Lopez “leading” a military insurrection in Venezuela and with the news that they were in control of the Military Base of La Carlota near Altamira in Caracas.

At this time is more than evident that -again- the extreme right of Venezuela started an irresponsible media operation or false flag operation in a desperate attempt to provoke a reaction among their followers or among some military that might be sympathetic towards them. Some experts said that knowing the lack of turnout for their new D-Day called for tomorrow May 1st, they did not have more options other than this one.

Orinoco Tribune, in an attempt to present balanced coverage about what is currently happening in Caracas, went to the street to report what we saw in the city. We went from East to West and vice versa and we saw that, besides some guarimbas in El Paraiso and El Marquez and of course the disruption in Chacao municipality (with Chacao police doing nothing to restore order), especially around Plaza Altamira and the 3 blocks that separate it from the “protestodromo” in front of La Carlota, 95% of the areas we covered were calm.

Driving Caracas from West to East. At the end you can see the Altamira exit where the Guaido and Lopez were early today. #operacionlibertad #venezuelalibre

Most of the west of Caracas was calm with the exception of El Paraiso (we didn’t reach Montalban). In the east of the city we detected from Petare to Altamira one street closure in Av. Francisco de Miranda near El Marquez.

Plaza Altamira was the concentration venue for right wingers that were tricked by their leaders who told them that today was the new D-Day to finish with Maduro’s “usurpation”. The number of attendees in Plaza Altamira was very similar to the number of chavistas we saw in front of the Miraflores Palace but their attitude was one of tension and frustration with a full load of guarimba spirit, covered face “protesters” running up and down the three blocks connecting Plaza Altamira with La Carlota military base and with a small contingent (no more that 40) of national guards repelling them from the Francisco Fajardo highway.

Meanwhile in the west of the city, there was a chavista demonstration in front of the Miraflores Palace defending the Bolivarian Revolution and the legitimate government of President Nicolas Maduro. In contrast this demonstration was happy with music and people behaving -mostly- like being in a block party.

We tried to go from Chacao to the South East of the city to reach a big cloud of smoke we believed came from Las Mercedes or Santa Fe but all the access points we tried were closed by security forces.

In Orinoco Tribune we are committed to real and balanced coverage of what’s happening in Venezuela with a progressive perspective and we believe it is very important to share this information specially today when the MSM is active trying to present a twisted reality about what is happening currently in Caracas.