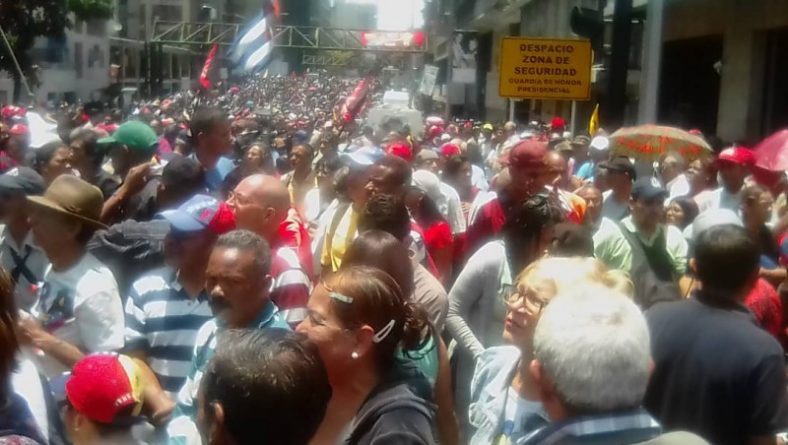 There is excitement, April 30, in the streets as tens of thousands stream towards Miraflores Palace where President Maduro leads Venezuela. While rumors of an attempted coup are broadcast on the news, special police and Venezuelan military are mobilized at key crossroads and strategic buildings. The mood is serious, but calm as the mobilization to defend President Maduro and the Bolivarian Revolution grows

Early morning, we woke to hear a lone woman’s voice shouting, “My God! My God! Freedom!” This was in response to television news that coup plotter and right-wing politician Leopoldo Lopez escaped house arrest. We soon watched video of Lopez meeting U.S. puppet Juan Guiado on the highway outside of La Carlota airport. Lopez awkwardly hugged a young soldier, attempting to give the impression he has military backing.

Lopez is now an outlaw and those helping him will face arrest and imprisonment. It is possible the U.S. wants Lopez to come to Washington DC. Trump and Bolton can then direct Lopez and Guiado in their attempts to destabilize Venezuela. The U.S. wants Venezuela’s oil under their control. Wall Street is also upset by the measures that provide over 2.6 million new homes in eight years, and health care for all.

As we drove to an important conference on building homes, we passed a small right-wing protest of 30 people in an upper class area in East Caracas. Working-class Venezuelans waiting for the bus were not impressed, frowning at the right-wing supporters of U.S. puppet Juan Guiado.

As we drove to the housing conference of the Mission Vivienda, we heard Vice President Delcy Rodriguez on the radio. She called for people to mobilize and defend their revolution and President Maduro. Rodriguez said, “We are calling all workers, all working people of the entire country, from all parts of Venezuela, to mobilize to defend our revolution and our president!”