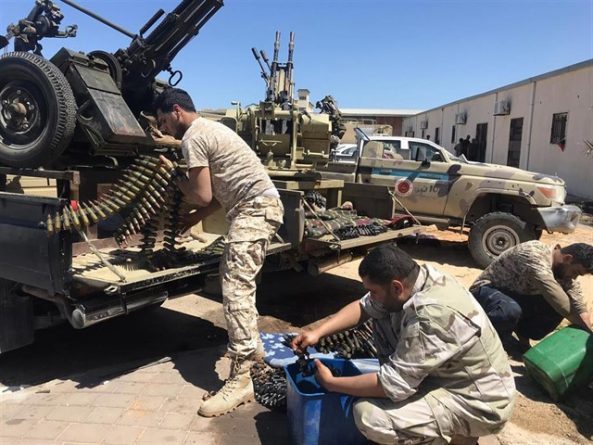 The UN High Commissioner for Human Rights, Michelle Bachelet, called for an immediate ceasefire in Libya and the establishment of humanitarian corridors to remove civilians from the fighting zone in Tripoli.

“There is an urgent need to establish safe humanitarian corridors for trapped civilians, so I would like to call for an immediate ceasefire and the resumption of the political process,” Bachelet said in a video message, broadcast by the press service of the UN office in Geneva.

Bachelet expressed deep concern over the use of heavy artillery and air strikes in residential areas of Libya.

RELATED CONTENT: Libya: “Oil is Everything” – Why Western Allies Like US & France Swing Weight in Favor of Hafta

She recalled that the use of explosive weapons in densely populated areas violates international humanitarian law.

Bachelet also called for the immediate release of refugees in the detention centers in Tripoli.

The Office of the United Nations High Commissioner for Refugees (UNHCR) estimates that at least 3,300 people are currently held in these centers.

The World Health Organization (WHO) reported this April 30, 345 dead and more than 1,600 injured during the three weeks of fighting in the Tripoli area.

Libya remains mired in a crisis since the overthrow of its historic leader, Muammar Gaddafi, in 2011, led to violent clashes between rival factions, the emergence of jihadist groups and mafias that are engaged in the trafficking of irregular migrants from Africa to Europe.

Currently in Tripoli operates the Government of National Unity, recognized as legitimate by the Security Council of the UN and chaired by Fayez Sarraj.

However, this power in Tripoli is not considered legitimate by the House of Representatives, a unicameral parliament based in the city of Tobruk (east), with its own government and supported by the Libyan National Army.

On April 4, the Libyan crisis entered a new spiral of tension after the commander of the Libyan National Army, Marshal Khalifa Haftar, ordered an offensive against Tripoli to “free it of terrorists”.