On January 11, Admiral Craig Faller, head of the United States Southern Command (SOUTHCOM), visited Guyana. According to a statement released by the US Embassy in Georgetown, the admiral met with government leaders and senior defense officials. At the time, the US Army was conducting joint military exercises with Guyana. Does this portend a new maneuver against Venezuela?

Subsequently, on January 13 the Vice President of Venezuela, Delcy Rodríguez, alerted Caribbean nations to take notice of the tense situation generated in the region by the governments of Guyana and the United States .

Background
October 3, 2020, marked 121 years since the the Paris Arbitration Award, in which 159,000 square kilometers of territory was stripped from Venezuela, west of the Essequibo River, by the British empire. On December 18, 2020, the Government of Venezuela rejected the International Court of Justice’s decision on its jurisdiction in the case and considered the recognition of the Arbitration Award of 1899 illegitimate.

Under the Geneva Agreement, Guyana and Venezuela agreed to solve the territorial dispute through channels designated by the United Nations (UN) for the peaceful settlement of disputes, defined in detail by Article 33 of the UN Charter.

This judgment (1899 Paris Arbitration Award) was issued by an arbitral tribunal meeting in Paris. The United States participated as a “benevolent representative” of Venezuela and the United Kingdom as owner of the colony of British Guiana, now the Cooperative Republic of Guyana. Venezuelan officials were not present at the time due to the supremacist nature of UK diplomacy.

The Venezuelan State rejects the aforementioned Award, considering the defects in the process and decision. In 1962 documents were released that discredited the legality of the Award (Mallet-Prevost Letter).

For its part, Venezuela presented a lawsuit before the United Nations (UN) with all the evidence indicating the violation of the terms of the Arbitration Award of 1899. This led to the signing of the Geneva Agreement on February 17, 1966, according to which the Essequibo territory would remain under the control of Guyana, under conditions that no economic exploitation should be undertaken without the mutual agreement of both countries.

Guyana received its independence that same year, but recognized the Venezuelan claim to sovereignty. In addition, the signatories were urged to find a conclusive and peaceful solution through negotiation.

Are Guyana and the United States preparing a military attack against Venezuela?
After the military exercises carried out on January 11 between Guyana and the United States, both parties signed a military cooperation agreement. According to information published by infodefensa.com, its purpose would be to simplify the process of exchanging goods and services “to support effective and mutually beneficial defense cooperation.”

More recently, on March 16, the Guyana Defense Force received a Bell 412 EPI helicopter to equip its air corps. The aircraft has US registration and a civilian paint scheme. It arrived at the Guyanese military base with two Guyanese Air Corps officers and a US pilot.

During the ceremony, Guyanese President Irfaan Alí stated that the acquisition of the aircraft “is a symbol of hope for the nation, in the face of the aggression of our western neighbor,” referring to Venezuela. He also said that the Guyanese were “very satisfied with our strategic partner in the United States.” 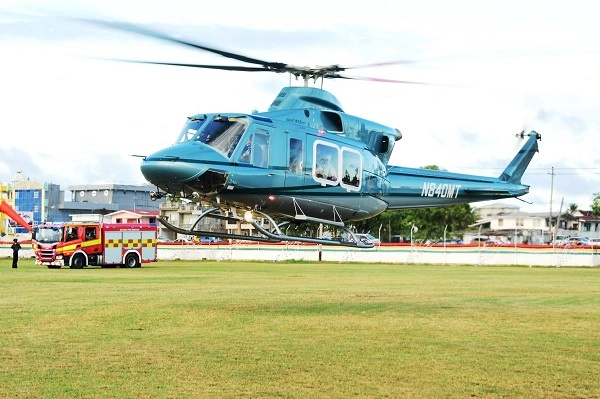 On its behalf, the government of Venezuela described the military exercises that Guyana carried out in conjunction with the United States on its coasts as a provocation and a threat.

“We are very aware that these military exercises are not carried out in the jurisdictional waters of Venezuela,” added Vice President Delcy Rodríguez.